As far back as I can remember, I’ve always had to make an effort to stay in shape. It always seemed like I had to put a little extra work in; it just isn’t in my genetics.

I didn’t seriously get into exercise until my early 20s, and when I did it was all cardio-based workouts, like running and Bikram yoga. I never touched a weight. Back in 2016, I moved from Los Angeles to New York when I was 28. I had landed a high-pressure job that took up the majority of my free time. So of course, after long days in the office, I would skip the gym (despite paying for a monthly membership). I also always opted for food delivery—I couldn’t pass up the convenience. It wasn’t long before I fell into a hole of eating high-carb, high-fat, high-dairy, and high-anything-else-bad-for-you diet.

I started putting on weight gradually. I went from a size 34 to a size 36, and before I knew it, I was struggling to fit into a size 38. After only two years, I gained 45 pounds—pushing the scale from 200 to 245 pounds.

In the summer of 2018, I got engaged on my 30th birthday. But after looking at all of the photos, I realized I needed to do something about my health. Not only were my clothes not fitting, but I had less energy and it was starting to impact my mental state.

Can’t wait to spend the rest of my life with you, Brandon! 💍❤️👬 #BAndJSeasTheDay

I attempted to get back into yoga and running, but I would always come up with an excuse to talk myself out of working out. My major wakeup call came in November 2018, when I was shopping at Club Monaco. I was trying on a shirt in an XL. When I was living in LA, I easily fit into a medium, so I expected the XL to be loose. Well, imagine my shock when it wouldn’t button: I was mortified to say the least. Plus, by that time, my then-fiancé and I decided we were going to get married on the beach in Mexico. I realized I’d be spending most of my time at the pool, meaning I would be in a swimsuit in front of all of my family and friends, and the thought of taking my shirt off was mortifying to me.

I decided that if I was going to actually get in shape, I needed to do something different. I looked up several gyms around my apartment and I found a studio called Fhitting Room. They offer 50-minute high intensity interval training classes, which combine strength and cardio for a full-body workout. 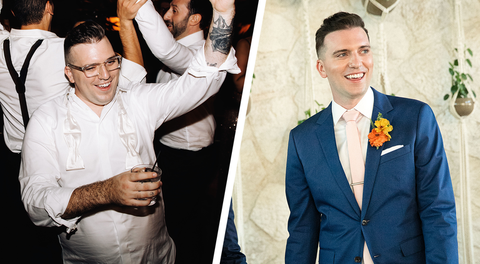 At Fhitting Room, each class is broken into four parts: the warm up, strength training, a circuit and a FHIX (functional high intensity mix).

I woke up for my first class, but after squeezing into my XL workout clothes, I considered bailing. I didn’t. I was intimidated, but I was more determined.

My first day at Fhitting Room was intense. I could barely make it through the 3-minute warm up and struggled through the majority of the remaining 47 minutes. Luckily, the trainers were extremely supportive. Though they were strict about form and were quick to correct me, they never made me feel like I was too out of shape to participate.

After attending a few classes, I got hooked. I chatted with Daury, and he helped me put together a workout routine: I would do HIIT workouts Monday, Wednesdays, and Fridays. Then, I would supplement with spin classes on Tuesdays and Thursdays. On the weekend, I would alternate between hot yoga and running. Daury’s main advice was to, “Not burn out, have a sense of balance and build strength and conditioning.”

Daury also helped me clean up my diet. I cut out dairy, complex carbs and processed sugar. Instead, I focused on smaller meals and snacks that consisted of lean proteins, legumes, and veggies. But, I did keep it realistic: I allowed myself one cheat meal per week, and instead of cutting alcohol out altogether, I switched from wine to vodka sodas. This helped me stay on track.

After following the diet and rigorous schedule, I saw my weight slowly start to drop. My clothing size went down, and I felt a lot stronger: both physically and mentally. I won’t lie, it wasn’t always easy, and there were times that I really wanted to skip class. But I forced myself to always show up.

I realize now this was more than just losing weight for an event. It was a massive lifestyle change that has helped completely transform me from the inside out. The biggest lesson I’ve learned when it comes to my health and fitness is that the hardest part is starting the change: but once it’s a habit, it’s hard to imagine life without it.

Not in NYC? Fhitting Room on Demand will allow you to take the same classes.

'After Being Prescribed Diet Pills, I Found A Natural Way To Maintain My Weight With The 80-20 Diet'

Ben & Jerry's Teams Up With Netflix for a Binge-worthy Flavor

‘I Loosened Up My Keto Rules And Added Intermittent Fasting—And I’ve Lost 45 Pounds'
Copyright © 2020 dailytophealth.com.
We and our partners use cookies on this site to improve our service, perform analytics, personalize advertising, measure advertising performance, and remember website preferences.Ok