From body odour to a burning tongue: ALL of the strangest symptoms of the menopause

Hot flushes, mood swings and reduced libido are all well-known symptoms of the menopause.

But doctors say there’s another sign to look out for — ‘the change’ could be spelling trouble for your love life.

A poll today revealed seven out of 10 women with marital difficulties, such as being divorced or going through a separation, blamed it for their woes.

Yet that’s not the only bizarre symptom suffered by some women going through the menopause.

Here, MailOnline walks you through some of the other stranger signs of the change. 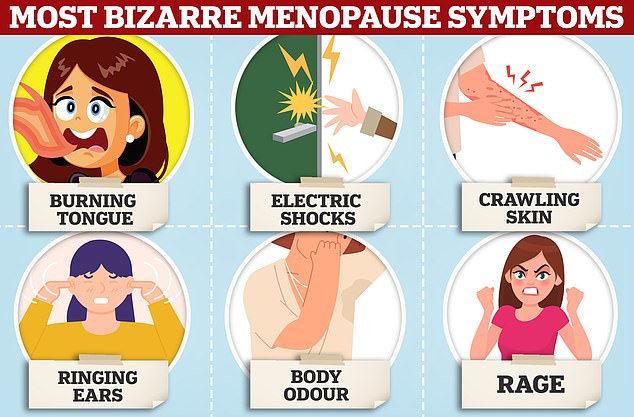 The drop in oestrogen and progesterone that causes the menopause has a vast array of effects on the body, some of which are totally bizarre

The menopause is when a woman’s periods stop. It usually between the ages of 45 and 55.

It is a normal part of ageing and caused by levels of oestrogen and progesterone dropping.

HRT replaces the hormones and is the main treatment used to treat symptoms — which can be severe and disrupt day-to-day life.

On average, women will experience at least 10 symptoms when menopause hits, but there are dozens more.

Bina Mehta, pharmacist at Boots, said: ‘Many women are unaware that there are over 40 signs and symptoms of the menopause.

‘Hot flushes are one of the most commonly known symptoms, however, there are many symptoms such as low mood and anxiety, brain fog, and fatigue that can be missed or attributed to other life events.

‘These symptoms are due to fluctuating hormones produced by the ovaries, mainly oestrogen.

‘The menopause is a natural process, and everyone’s experience is different.’

What are the 40 symptoms of menopause?

Hot flushes can leave women with a sudden feeling of warmth in the upper body.

But it’s not just the body that can randomly feel hot when you enter the menopause.

Around 8 per cent of menopausal women experience a burning tongue, according to supplement manufacturer DR.VEGAN’s Annual Menopause Survey 2022 of more than 1,000 women in Britain.

But The Menopause Charity, which offers support to women going through the menopause, as well as doctors treating it and employers whose staff are affected by it, claims it can strike up to one in three menopausal women.

It can feel like a sudden, short pain in the mouth and is more common in women who also experience metallic tastes, mouth dryness, tingling or soreness.

Actually scalding the mouth, for example by drinking tea that is too hot, makes it even worse.

Burning can also be felt around the roof of the mouth, lips or inside of the cheeks.

Doctors believe that it is caused by lower oestrogen levels activating pain-sensitive nerves around the taste buds in the tongue.

But there are currently little-to-no specific treatment options available. It can take several months for the symptoms to fade, even with HRT.

The NHS recommends women suffering the symptom take up yoga and mindfulness to ease stress.

This is thought to make the feeling of pain less intense.

Medications, including low dose antidepressants, can also be recommended. These replace the natural painkilling endorphins, which dip when oestrogen levels are low.

As well as burning, menopausal women can be left feeling like they’re suffering from electric shocks.

The jolts of pain, which can be severe, usually occur just before a hot flush.

Electric shock sensations can feel like a rubber band snapping in the flesh under the skin anywhere on the body, most commonly across the forehead.

Medics are not entirely sure what causes the symptom, but it’s thought that fluctuating hormone levels can lead to the nervous system misfiring.

Drugs used to treat hot flushes have also been blamed for the sensation, which can affect around 15 per cent of people.

As with most of these symptoms, doctors do not prescribe anything specific to help prevent them, other than HRT.

A diet high in soybeans, tofu, chickpeas, broccoli and pumpkin, sesame and sunflower seeds helps increase them in the body.

The symptom is different to trigeminal neuralgia, a rare pain that feels like an electric shock in the jaw, teeth and gums that is most common in women aged over 60.

Trigeminal neuralgia is usually caused by a nerve in the skull getting trapped and is not linked specifically to the menopause.

Another unpleasant but little-known, symptom is formication.

It leaves some women feeling like they have an army of ants crawling underneath their skin.

The sensation — which affects up to 21 per cent of menopausal women — usually occurs early in the change or soon after a woman’s last period and does eventually disappear on its own.

Oestrogen stimulates the production of collagen — which strengthens and tightens— and oils, which helps keep it moist.

When levels of the hormone fall, this naturally dries out the skin, causing it to feel itchy.

When oestrogen levels stabilise after around a year, often with the help of HRT, the symptom tends to fade away.

But in the meantime, the NHS recommends women eat a diet rich in healthy fats, with food including salmon, walnuts and eggs prioritised.

Antihistamine creams are also available over the counter to help ease irritation, while doctors can also help if the effects are not manageable.

WHAT IS THE MENOPAUSE?

Menopause is when a woman stops having periods, and is no longer able to get pregnant naturally.

It usually happens between the ages of 45 and 55.

It is a normal part of ageing and caused by levels of the sex hormone oestrogen dropping.

Some women go through this time with few, if any, symptoms.

Others suffer from hot flushes, sleeping difficulties, mood swings and brain fog, which can last for months or years and might change over time.

HRT replaces the hormones and is the main treatment used to treat symptoms — which can be severe and disrupt day-to-day life.

Menopause happens when your ovaries stop producing as much of the hormone oestrogen and no longer release an egg each month.

Menopause can also leave women with the unpleasant sensation of tinnitus, in theory.

This is when you hear noises that aren’t coming from the outside world.

Most commonly, it sound like a constant ringing in the ears, although buzzing, humming and hissing are all signs of the condition.

More than a fifth of women going through the change suffer tinnitus, according to the DR.VEGAN survey. It is listed as a potential side effect on several health advice websites.

NHS data suggests around 13 per cent of British adults in the wider population experience tinnitus.

Although a direct causal link with menopause has yet to have been established, it is also thought to be linked to the same drop in hormone levels as all the other symptoms.

Little research has been done into why it appears to be more prevalent in menopausal women but experts believe it may be linked to blood flow in the ear.

A sudden drop in oestrogen can limit the flow to the inner ear tube — known as the cochlear — potentially sending the nerve signals inside haywire.

This can affect how sound is perceived and may be to blame for the ringing sensation.

Other than HRT, deep breathing, yoga and other stress-reducing activities are also believed to help alleviate the symptom. Depression and mood disorders have been linked to tinnitus.

As with formication, the symptom can disappear on its own, although it does not for everyone.

Another potential side effect of the change is developing a bad smell.

As with during a hot flush, when oestrogen levels drop, the hypothalamus gland in the brain is tricked into think you are overheating.

This triggers the body to start sweating excessively, even when you’re not actually hot.

The sweat can build up and result in unpleasant body odour.

At the same time, the same time the effect is boosted by the plunging levels of oestrogen meaning amounts of the male sex hormone testosterone are relatively higher.

Testosterone can boost the levels of bacteria in sweat, making the moisture smell more.

GPs can also help pick out extra-strength deodorants if the problem is serious.

With the host of symptoms women have to deal with, it is not surprising around 70 per cent of those in the menopause feel irritable.

But for some this boils even further to a lot of anger or even rage.

Perimenopause rage differs from normal feelings of anger because it can occur out of the blue.

Mood swings are a common side effect of the change because oestrogen plays an important role in regulating the ‘happy hormone’ serotonin.

Doctors advise the same stress-relieving activities as with the other symptoms, including yoga and meditation, on top of HRT.

Women are also encouraged to allow angry outbursts to happen rather than trying to suppress them.

A study by Canadian researchers published in the Journal of Prevention and Intervention in the community, found self-silencing can increase the risk of developing depression in women.

Finally, anger management therapy is recommended for women who are really struggling with the symptom.