A common symptom of COVID-19 is a partial or complete loss of smell. The virus infects sustentacular cells in the olfactory epithelium and is thought to impair thereby the activity of the sensory neurons in this epithelium.

Scientists at the Max Planck Research Unit for Neurogenetics in Frankfurt in collaboration with physicians and scientists at the University Hospitals Leuven (Leuven, Belgium) and hospitals in Bruges and Brussels, Belgium, have now examined tissue samples of nasal mucosa and brain of patients who died from or with a SARS-CoV-2 infection, including the delta, omicron BA.1 or BA.2 variants.

In a total of more than a hundred COVID-19 patients, the scientists failed to find evidence for viral invasion of the brain. A poorly characterized type of fibroblasts in the olfactory mucosa appears to act as one of several anatomical barriers that shield the brain from the virus at vulnerable interfaces.

Anosmia occurs often after infection with SARS-CoV-2, ranging from a temporary impairment to a persistent, possibly permanent, loss of smell. The nasal mucosa represents one of the main entry sites of the virus. Early in the pandemic, the suspicion arose that the virus might infect cells of the olfactory epithelium, hitchhike on the olfactory nerve, and then infect or invade the brain via the nearby olfactory bulb, which is located only a few millimeters from the nasal cavity.

But this suspicion has not been confirmed. In November 2021, scientists at the Max Planck Research Unit for Neurogenetics in Frankfurt, together with physicians and scientists in Leuven and Bruges, Belgium, reported that SARS-CoV-2 infects the sustentacular cells (supporting cells) of the olfactory epithelium, but not the sensory neurons. The researchers were unable to detect the virus in the olfactory bulb.

The physicians had developed a bedside surgical procedure to collect tissue samples from deceased patients. With this new procedure, they were able to harvest, within an hour or two after the time of death, tissue samples of respiratory mucosa, olfactory mucosa, and the frontal lobe of the brain, as well as whole olfactory bulbs, in a cohort of 70 COVID-19 patients. This unusually short postmortem interval makes the tissue samples highly suitable for molecular and histological studies. 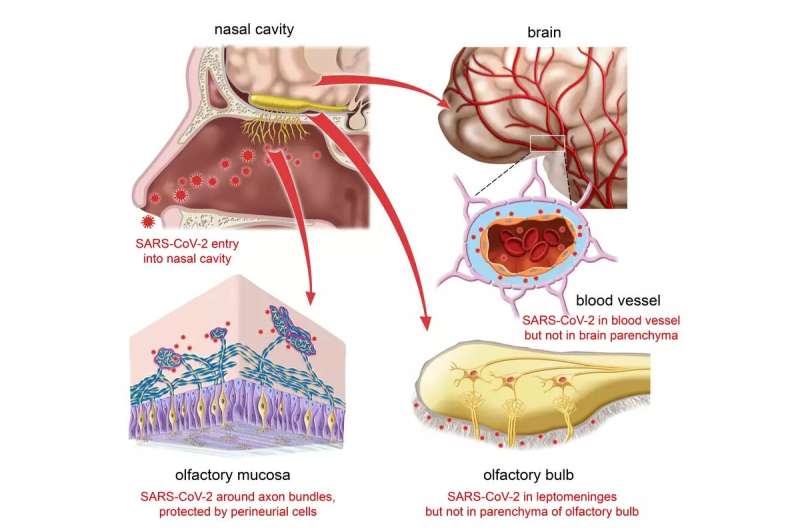 All brain samples were negative

Now the team has examined tissue samples obtained from a second cohort of 45 COVID-19 patients who had died within two weeks after diagnosis and were infected with the delta, omicron BA.1 or BA.2 variants. They also analyzed tissue samples of the frontal lobe of the brain of most COVID-19 patients from the first cohort, who were infected with non-variants of concern or the alpha variant.

“We examined microscopically the olfactory bulbs and the frontal lobe samples for viral nucleic acid and protein. All samples were negative: no neurons were infected. Moreover, by trying to culture SARS-CoV-2 from cerebrospinal fluid samples, we could not find evidence that SARS-CoV-2 had invaded the brain,” says Peter Mombaerts of the Max Planck Research Unit for Neurogenetics.

Adds Laura Van Gerven, ENT surgeon at the University Hospitals Leuven, Belgium, “SARS-CoV-2 would have the greatest chance of displaying its hypothetical neurotropic or neuroinvasive capacity in these highly vulnerable patients, with a colossal failure of the host defense and the gravest outcome of all.”

The so-called perineurial fibroblasts of the olfactory nerve—thin, elongated cells whose function is not known—apparently act as a protective anatomical barrier. They wrap around the olfactory nerve bundles in one or more densely packed layers.

“We do not know how these cells prevent the virus from invading the olfactory nerve bundles. But they seem instrumental in preventing SARS-CoV-2—and possibly some of the many other pathogens that infect the nasal mucosa—from invading the brain,” Mombaerts explains.

The paper is published in the journal Neuron. The new results do not support the suspicion that SARS-CoV-2 infects brain cells and invades the brain. The findings have implications for the mechanisms of long COVID.