Cannabis can strengthen the immune system and fight cancer, according to research.

Scientists are calling for more studies to be done on humans after studying the cancer-fighting effects of chemicals in the drug.

THC – the chemical which gives people a high when they smoke the drug – and others like it could be beneficial, researchers say.

The new research review admits cannabis has ‘anti-cancer effects’ and says more research needs to be done in real patients to confirm the findings.

This study emerges as the UK Government has today inched closer to legalising medicinal cannabis in the country after years of pressure from campaigners. 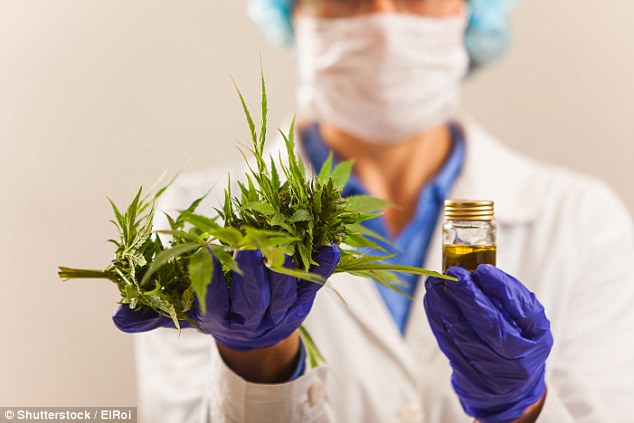 Scientists say THC may boost people’s immune systems and help them fight cancer, and there needs to be more studies done on real patients

After reviewing 100 past studies, scientists at Rostock University Medical Centre in Germany have claimed chemicals in cannabis could fight cancer.

The researchers say phytocannabinoids – chemicals in the plant – need to be explored more as a source of anti-cancer benefits.

While cannabidiol, or CBD, has gained traction as a legitimate alternative medicine in the UK, the psychoactive THC is still outlawed.

Levels of THC – short for tetrahydrocannabinol – are how the strength of the drug is measured; it is what gives recreational users a buzz.

Previous research has shown cannabis can reduce cancer treatment side effects such as nausea and sickness, but it could also help to directly fight the disease, the study claims.

‘There is still a need for cancer drugs’

‘Clinical studies are now urgently needed to investigate the impact of cannabinoids on cancer growth and progression in patients.’

Studies have shown cannabinoids may stop cancer cells from dividing and invading normal tissue, and they may block the blood supply to tumours.

Cannabinoids may stimulate the immune system to fight back

Researchers say phytocannabinoids in the plant could postively stimulate the brain, immune system and hormone system to fight back against tumours.

The fact that researchers have seen effects repeated across a wide range of studies shows the cannabis has a measureable effect that can be repeated, the study said.

The study was published in the British Journal of Pharmacology.

WHAT ARE THE PROS AND CONS OF CANNABIS?

Cannabis is an illegal Class B drug in the UK, meaning possession could result in a five year prison sentence and those who supply the drug face up to 14 years in jail.

However, the drug is widely used for recreational purposes and can make users feel relaxed and happy.

But smoking it can also lead to feelings of panic, anxiety or paranoia.

Scientific studies have shown the drug can alleviate depression, anxiety and stress, but heavy use may worsen depression in the long term by reducing the brain’s ability to let go of bad memories.

It can also contribute to mental health problems among people who already have them, or increase users’ risk of psychosis or schizophrenia, according to research.

Marijuana can be prescribed for medical uses in more than half of US states, where it is used to combat anxiety, aggression and sleeping problems. Researchers are also looking into whether it could help people with autism,eczema or psoriasis.

Cannabis oil containing the psychoactive chemical THC, which is illegal in the UK, is claimed to have cancer-fighting properties, and one 52 year-old woman from Coventry says she recovered from terminal bowel and stomach cancer by taking the drug.