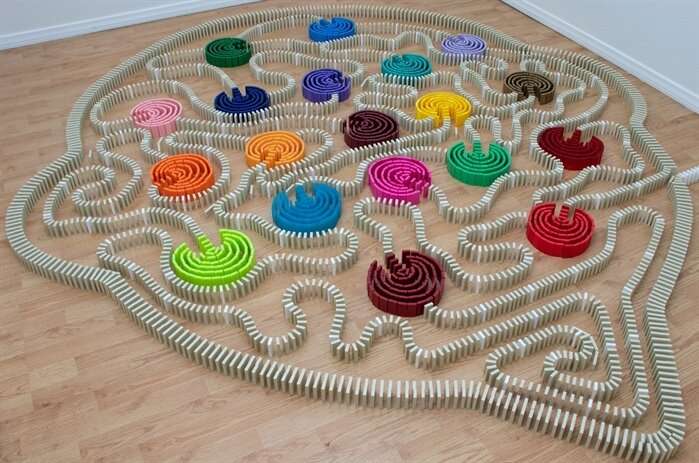 Epilepsy, a neurological disease that causes recurring seizures with a wide array of effects, impacts approximately 50 million people across the world. This condition has been recognized for a long time—written records of epileptic symptoms date all the way back to 4000 B.C.E. But despite this long history of knowledge and treatment, the exact processes that occur in the brain during a seizure remain elusive.

Scientists have observed distinctive patterns in the electrical activity of neuron groups in healthy brains. Networks of neurons move through states of similar behavior (synchronization) and dissimilar behavior (desynchronization) in a process that is associated with memory and attention. But in a brain with a neurological disorder like epilepsy, synchronization can grow to a dangerous extent when a collection of brain cells begins to emit excess electricity. “Synchronization is thought to be important for information processing,” Jennifer Creaser of the University of Exeter said. “But too much synchronization—such as what occurs in epileptic seizures or Parkinson’s disease—is associated with disease states and can impair brain function.”

Measurements of epileptic seizures have revealed that desynchronization in brain networks often occurs before or during the early stages of a seizure. As the seizure progresses, networks become increasingly more synchronized as additional regions of the brain get involved, leading to high levels of synchronization towards the seizure’s end. Understanding the interactions between the increased electrical activity during a seizure and changes in synchronization is an important step towards improving the diagnosis and treatment of epilepsy.

Jennifer Creaser, Peter Ashwin (University of Exeter), and Krasimira Tsaneva-Atanasova (University of Exeter, Technical University of Munich, and Bulgarian Academy of Sciences) explored the mechanisms of synchronization that accompany seizure onset in a paper that published in December in the SIAM Journal on Applied Dynamical Systems. In their study—which took place at the Engineering and Physical Science Research Council’s Centre for Predictive Modelling in Healthcare at the University of Exeter and University of Birmingham—the researchers used mathematical modeling to explore the interplay between groups of neurons in the brain that leads to transitions in synchronization changes during seizure onset. “Although this is a theoretical study of an idealized model, it is inspired by challenges posed by understanding transitions between healthy and pathological activity in the brain,” Ashwin said.

The authors utilize an extended version of an existing mathematical model that represents the brain as a network connecting multiple nodes of neuron groups. The model network consists of bistable nodes, meaning that each node is able to switch between two stable states: resting (a quiescent state) and seizure (an active and oscillatory state). These nodes remain in their current state until they receive a stimulus that gives them a sufficient kick to escape to the other state. In the model, this stimulus comes from other connected nodes or appears in the form of “noise”—outside sources of neural activity, such as endocrine responses that are associated with an emotional state or physiological changes due to disease.

The influence between neighboring nodes is governed by a coupling function that represents the way in which the nodes in the network communicate with each other. The first of the two possible types of coupling is amplitude coupling, which is governed by the “loudness” of the neighboring nodes. The second is phase coupling, which is related to the speed at which the neighbors are firing. Although the researchers needed to utilize a simple formulation on a small network to even make their analysis possible—a more complex and realistic system would be too computationally taxing—they expected their model to exhibit the same types of behaviors that clinical recordings of real brain activity have revealed.

The nodes in the modeled system all begin in the healthy resting state. In previous research, the authors found that adding a small amount of noise to the system caused each node to transition to the active state—but the system’s geometry was such that returning to the resting state took much longer than leaving. Because of this, these escapes can spread sequentially as a “domino effect” when a number of nodes are connected. This leads to a cascade of escapes to the active state—much like a falling line of dominos—that spreads activity across the network.

Creaser, Ashwin, and Tsaneva-Atanasova’s new paper builds upon this previous research on the domino effect to explore the transitions into and out of synchrony that occur during cascades of escapes. The team used their model to identify the circumstances that bring about these changes in synchrony and investigate how the type of coupling in a network affects its behavior.

When the model incorporated only amplitude coupling, it exhibited a new phenomenon in which the domino effect could accelerate or decelerate. However, this effect had no bearing on synchronization changes in the network; all of the nodes started and remained synchronized. But when the model incorporated more general amplitude and phase coupling, the authors found that the nodes’ synchrony could change between consecutive escapes during the domino effect. They then determined which conditions would cause changes in synchrony under phase-amplitude coupling. This change in synchrony throughout the sequence of escapes was the study’s most novel result.