The ability to separate proteins and other biological components means that electrophoresis is popular in the field of forensics, particularly in the analysis of unknown samples. 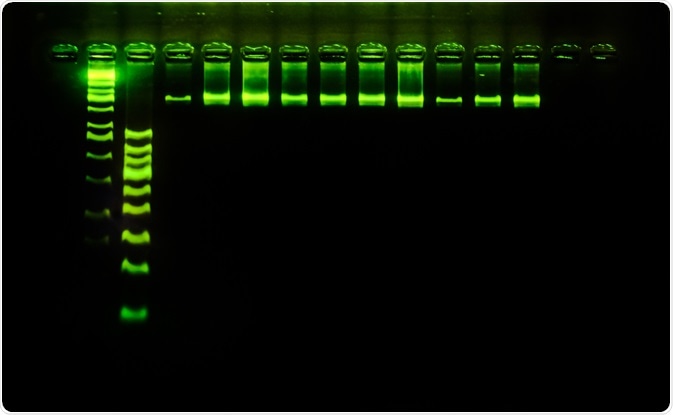 What are the basic principles of electrophoresis?

In electrophoresis, the substance that has to be separated is made to travel across a gel with a specific pore size using an electrical field. Also, one end of the gel has a positive charge, while the other end has a negative charge. The movement of the substance is based on its charge and mass.

As different components in a substance may have variable masses and charge, they will move differentially. For example, a larger strand of DNA will travel a shorter distance when compared to a smaller strand. Similarly, a component that is positively charged will move faster towards the negative end of the gel, compared to a component that has a negative charge. Thus, electrophoresis can be used to separate unknown compounds in a substance.

DNA is a negatively charged molecule due to the presence of a phosphate group. Thus, when an electric field is applied, DNA will move towards the positive anode. As described before, the rate of this movement will be based on its charge and mass.

When moving in a liquid the speed of migration will be much faster, making it increasingly difficult to separate the differential speeds of different DNA molecules. The use of a gel slows this process down, making easier to resolve DNA molecules moving at different speeds. Agarose or poly-acrylamide gel are the most commonly used reagents in gel electrophoresis.

DNA differences between two people can be found with the help of short tandem repeats (STRs), which are a particular type of repeat that is variable and can be measured. During the forensic analysis, around 1 nanogram DNA is first extracted from the sample.

Using a principle called PCR or polymerase chain reaction, the sequence is amplified several times. There are 13 core STRs, the size of which varies between 100–300 bases. For the forensic analysis, all 13 STRs are examined between the two samples to assess the similarity between them.

Electrophoresis can be used to analyze proteins, including those found in human blood. Unlike DNA or RNA, proteins may not be charged. Hence, the sample is often treated with a detergent called sodium dodecyl sulphate. Mixing blood with this detergent causes proteins to unravel and also imparts a negative charge to them.

This method is also known as high-performance capillary electrophoresis and can be used to separate different kinds of molecules, including inorganic molecules and biopolymers. This method is highly efficient, fast (can deliver results in less than 30 minutes), requires tens of ml of buffer per day, has high resolution and is simple.

The components of capillary electrophoresis include injection system, capillary and high voltage source, electrode, and a detector. This method works for charged inorganic molecules. The inorganic molecules will move based on their charge towards the oppositely charged end. This method has advantages over other methods, such as High-Performance Liquid Chromatography (HPLC).

HPLC has a more complex instrumentation, which makes it difficult to handle and operate. However, it also has a wider variety of column lengths, while capillary electrophoresis is restricted to thin capillaries.

Dr. Surat graduated with a Ph.D. in Cell Biology and Mechanobiology from the Tata Institute of Fundamental Research (Mumbai, India) in 2016. Prior to her Ph.D., Surat studied for a Bachelor of Science (B.Sc.) degree in Zoology, during which she was the recipient of anIndian Academy of SciencesSummer Fellowship to study the proteins involved in AIDs. She produces feature articles on a wide range of topics, such as medical ethics, data manipulation, pseudoscience and superstition, education, and human evolution. She is passionate about science communication and writes articles covering all areas of the life sciences.