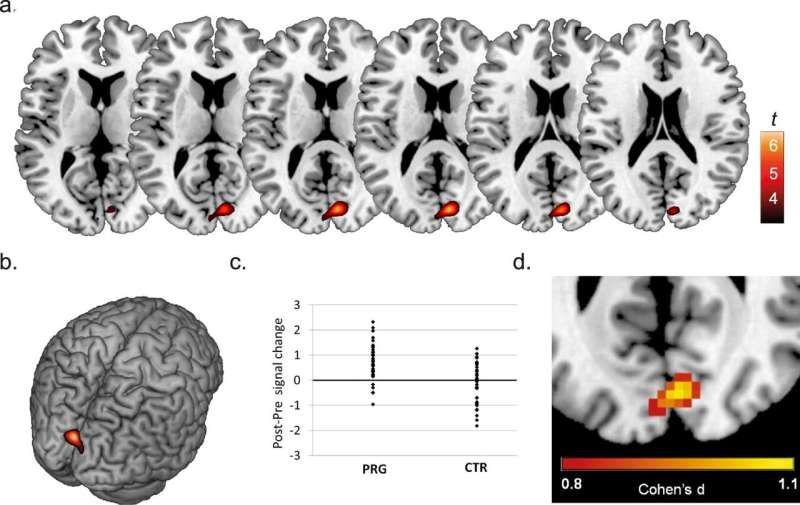 A team of researchers affiliated with multiple institutions in the Netherlands has found evidence of structural changes occurring in the brain during pregnancy. In their paper published in the journal Nature Communications, the group describes how they conducted MRI scans on volunteers before pregnancy, and during and after birth. They then compared what they found to a control group, and outlined what doing so showed them.

Prior research and anecdotal evidence has suggested that pregnancy in some people can lead to what some have described as “mommy brain,” where pregnancy leads to foggy and/or forgetful thinking. Prior research has also found that pregnancy can play havoc with a person’s emotions due to the release of a wide variety of hormones. In this new effort, the researchers suspected that pregnancy may lead to physical changes to the brain that may be responsible for the fogginess.

The work by the team involved asking 28 volunteers to undergo MRI scans prior to becoming pregnant, during pregnancy and after the baby was born. Each also had a final MRI a year after their baby was born. Each of the volunteers was also asked to fill out surveys and questionnaires throughout the study and they also gave urine samples that allowed for testing hormone levels.

In looking at the data from the subjects, and from others in a non-pregnant control group, the researchers found some subtle changes to the architecture of a part of the brain—a part normally involved in daydreaming. The researchers found subtle changes in parts of the brain that make up the Default Mode Network, which becomes active when a person shifts their thinking inward, whether just thinking, or daydreaming.

The researchers were not able to isolate the factors that led to such changes but suggest it likely has something to do with the release of hormones. They also were not able to explain why it occurred—though they theorize that it is part of a system that promotes bonding between mother and baby. They also note, that adding introspection to the pregnancy and birth process may help to reduce stress and to mitigate memories of the pain experienced during birth, helping the mother to accept another pregnancy in the future.