Giving children fillings ‘is pointless’ because it’s too late to help them once decay has started, study warns

Conventional fillings may be pointless for treating rotting teeth in children, a study suggests.

Researchers found no evidence the treatment is more effective at reducing pain and infection than brushing well and cutting down on sugar.

They say giving children fillings may achieve nothing but expose them to the discomfort of an injection and the sound of the drill.

Almost half of under eight year olds and a third of children aged five have tooth decay.

But a lack of clear NHS guidelines means dentists have to rely on their experience and judgement to decide whether or not to intervene. 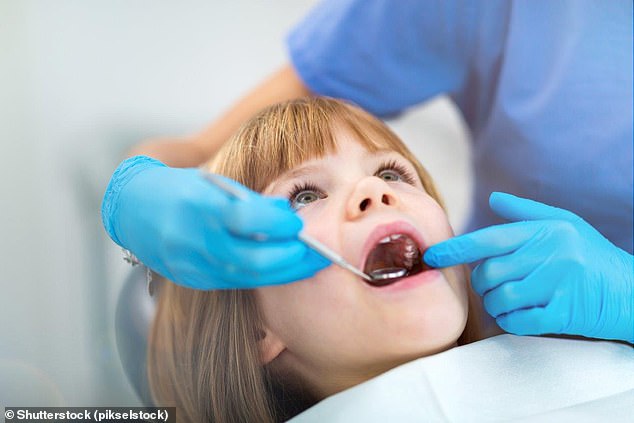 In their latest study, researchers from the University of Dundee looked at more than 1,140 children between the ages of three and seven with visible tooth decay.

One of three treatment approaches was then chosen randomly for each child’s dental care for the duration of the trial, which was up to three years.

Sugary food and beverages are one of the main causes of tooth decay.

Bacteria in the mouth break down the sugar in your mouth which produces acid.

The acid dissolves the tooth surface, called the enamel, which is the first stage of tooth decay.

Some sugars occur naturally in food and drink, such as fruit, honey and milk.

The naturally occurring sugar in dried fruit, such as raisins, dates and apricots, can also contribute to tooth decay.

Other foods have sugar added to them by the manufacturer, which is sometimes called processed food, including cakes, biscuits, flavoured milks and chocolate.

Cavities, which are large holes in the teeth, are also created by acids.

Without treatment, cavities can progress past the enamel and into the deeper layers of the tooth, causing pain and possible tooth loss.

Acids remove minerals from the enamel through a process called demineralization.

This process is reversed by minerals in the saliva which strengthen the teeth again.

However, there is only so much that minerals, including calcium, phosphates and fluoride can do to prevent the effects of sugar on teeth if a person is eating a lot of sugary foods and drink.

The first approach avoided placing any fillings and aimed to prevent new decay by reducing sugar intake, brushing with fluoridated toothpaste and placing of fissure sealants on their teeth.

Another involved drilling out tooth decay and inserting a filling.

The third treatment strategy was a minimally invasive approach where tooth decay was sealed in under a metal crown to stop it progressing.

The main trial findings, published in the Journal of Dental Research, found no evidence any of the treatment strategies were better than the other at reducing pain, infection, quality of life or dental anxiety.

Professor Nicola Innes, chairwoman of paediatric dentistry at the University of Dundee and lead author on the paper, said: ‘Our study shows that each way of treating decay worked to a similar level but that children who get tooth decay at a young age have a high chance of experiencing toothache and abscesses regardless of the way the dentist manages the decay.

‘What is absolutely clear from our trial is that the best way to manage tooth decay is not by drilling it out or sealing it in – it’s by preventing it in the first place.’

‘I believe the key to success in prevention lies within families and communities; for this reason the Scottish Government launched the Oral Health Community Challenge Fund for third sector organisations working alongside families living in our most disadvantaged areas.

‘The activities from these projects complement our mainstream Childsmile work in education and health settings.’

The study was led by dentists from the universities of Dundee, Newcastle, Sheffield, Cardiff, Queen Mary University of London and Leeds.

It was funded by the Health Technology Assessment programme of the National Institute for Health Research.