New NHS advice for trans parents has been described as ‘ideological’ for failing to mention the word breasts and ‘normalising’ a potentially dangerous chest-binding technique.

It also encourages people to keep taking hormone transitioning drugs when they ‘chestfeed’, despite admitting ‘it is unclear what effect this could have on your baby’.

The guidance was written a year ago but was only issued online this week after nearly a year of internal wrangling over whether to publish.

It has provoked concern among nurses and members of the public, who said the advice fails to warn people about health risks to both parents and babies.

A page titled ‘chestfeeding if you’re trans or non-binary’ makes no mention of breasts and refers to breast reduction operations as ‘top surgery’.

The advice also has a section on binding, a technique used by women transitioning to men to flatten their breasts, usually with extremely tight fitting bras.

Experts have previously warned the technique can cause bruised ribs, fractures, breathing difficulties and infections.

Even NHS England advice in 2008 said bindings should only be used for short periods of time because they ‘may cause back problems’ and can distort breast tissue, which could affect any future surgery to remove the breasts. 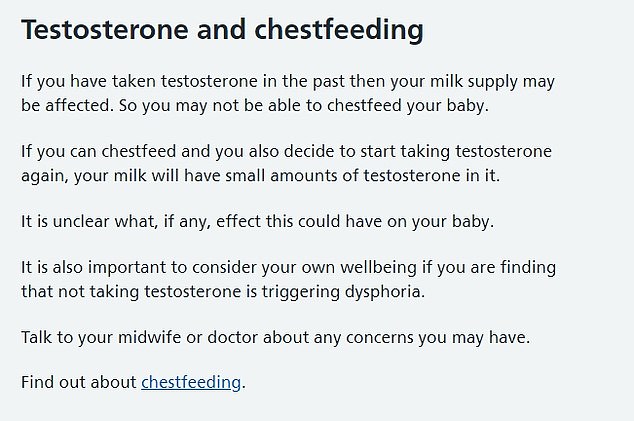 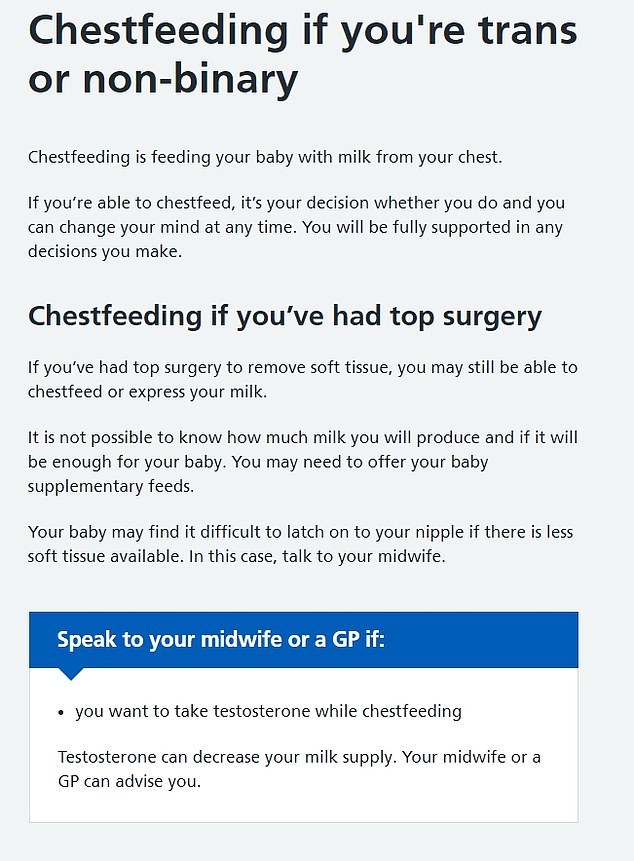 The term chestfeeding if used throughout the page with the term ‘breast’ omitted. Breastmilk likewise has been replaced with ‘milk from the chest’

The new NHS page said women who bind may be a higher chance of getting an infection called mastitis, an infection of the breast that which can make it more difficult to breastfeed.

A separate page admits ‘it is unclear’ what effects taking testosterone and ‘chestfeeding’ will have on the baby.

It also adds: ‘It is also important to consider your own wellbeing if you are finding that not taking testosterone is triggering dysphoria. ‘

Kat Barber, a nurse from Shrewsbury, said the NHS failed to adequately highlight the risks involved in its advice.

‘There is advice in here that negates to mention that binding during breastfeeding may adversely impact health supply,’ she tweeted.

‘Specific advice for trans people is great, but they deserve to know the full range of possible harms, and the NHS has a duty to make that clear.’

‘It uses the ideologically driven language of “chestfeeding”’, he said.

‘Most worryingly, it normalises breast binding, which studies have shown can cause significant physical health problems.’

‘This is utterly irresponsible. The NHS should not be recommending breast-binding under any circumstances, but for breastfeeding it is verging on criminal,’ she said.

Dr Karleen Gribble, an expert in nursing and midwifery from Western Sydney University in Australia, said the NHS page was ‘misleading’.

She said the advice on binding was ‘unclear’ and failed to highlight the risks of mastitis.

‘The literature that has considered binding and lactation universally says that this is not something that should be attempted early in lactation and that if it attempted later on there needs to be great caution taken.

‘They are not doing anyone any favours by not saying that it is not recommended or by not linking to the NHS web page that deals with mastitis in detail.’

Dr Gribble added there has been very little research on the affects of testosterone in breastmilk.

Considering the unknowns she said it was good that people are being asked to speak to a health professional about the issue, but added there were so many unknowns it was difficult to know what guidelines to follow.

‘It’s good that people are being referred to their doctor or midwife but the question I would have is, where are these health providers going to get information to support them?’, she said.

‘The information seems to suggest that it is okay in some circumstances for testosterone to be taken, but if so, what are those situations?’.

An NHS spokesperson said: ‘The NHS website provides information for everyone, and we add pages to the site to keep it in line with the best clinical evidence and make it as helpful as possible to everyone who needs it.’

The report, from the LGBT Foundation, made the recommendation after surveying 121 trans Britons on their experience of pregnancy. 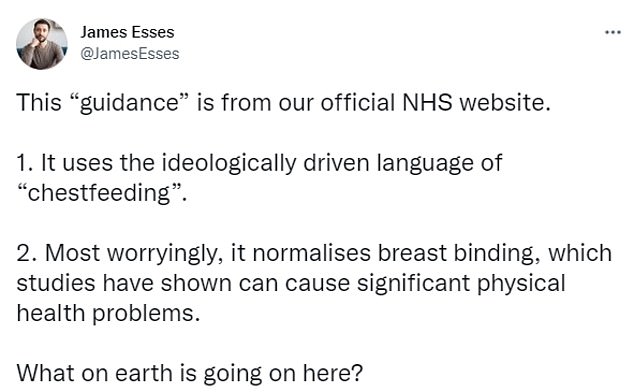 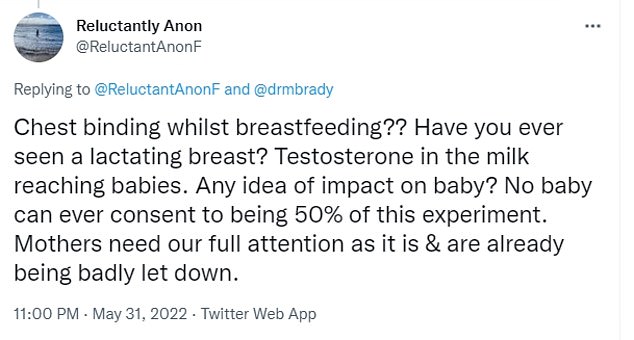 A female-to-male trans person, a transman, can still become pregnant and give birth as long as they are fertile and their womb has not been removed.

However, they may struggle to breastfeed if they have had surgery to remove their breast tissue, known as breast reduction or top surgery.

Male-to-female trans people, transwomen, cannot give birth as they were not born with a womb.

However, scientists believe it is theoretically possible to impregnate a trans woman using IVF, when the eggs are fertilised outside the body and then inserted.

But it would require a healthy womb for the child to grow in, and transplant operations are years if not decades away from making that a reality.

There are no accurate estimates on how many trans people there are in the UK, however the Government estimates there are between 200,000-500,000.