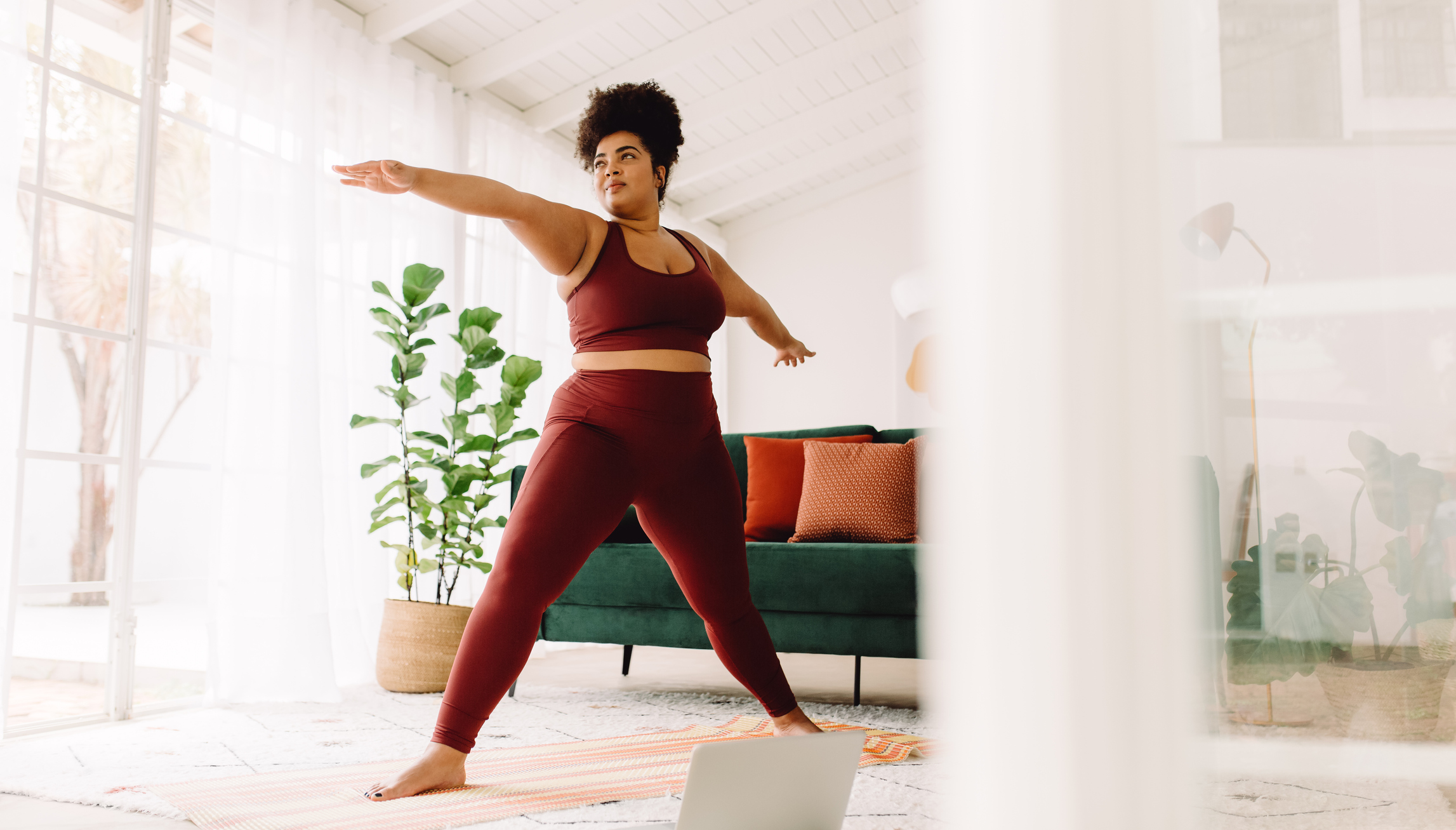 It has recently been said that ‘heroin chic’ is back.

This look was popularised by models such as Kate Moss in the early 1990s thanks to their waif-like frames, pale skin and dark under-eye circles.

However, even the suggestion that this negative body image could make a resurgence is being slammed.

Thin is most definitely out – and let’s hope it never returns.

‘I think there has been a real shift in body positivity over the past few years,’ says therapist and author, Marisa Peer.

‘This has really helped to challenge stereotypical “ideals” of how a woman should look and highlight how all women’s bodies are different and beautiful. Social media is an important part of the awareness-raising process, but I think we still have a long way to go in an age where influencers, reality TV stars, and filtered photos still fill our newsfeeds.’

Body positivity is definitely on the rise and the UK has been revealed as the third most body confident country in the world, according to Cult Beauty. The online beauty retailer analysed Google searches, Instagram hashtags and online articles about body confidence, placing the UK in third position after India and the US, respectively.

The data also shows that Brits are responsible for the second highest number of Instagram posts using body positive hashtags, behind Australia.

The latest research from David Lloyd Clubs backs this up with 30 per cent of women saying they feel it’s important to prioritise their wellbeing over how they look  and 52 per cent saying their motivation for exercise is  to feel healthier.

In a bid to embrace body acceptance, Pinterest banned weight loss ads last year, reporting this summer that searches for ‘body positivity’ had since doubled and ‘accept your body’ quotes had tripled.

Instagram, meanwhile, has updated its ‘sensitive content control’, allowing users to block diet and weight loss ads from their feeds – and Facebook says: ‘We don’t allow advertisers to run ads that imply or attempt to generate negative self-perception in order to promote diet, weight loss, or other health-related products.’

Body positivity is moving in the right direction and according to Marisa, the key to embracing your body starts in your mind.

‘Stop comparing yourself to others and instead focus on the features you most like about yourself,’ she adds.

‘Reframe your perceived flaws as positives. The lines around your eyes are signs you have smiled, laughed and enjoyed life, while stretch marks on your stomach reflect the fact you carried a tiny life.

‘Unfollow anyone who makes you feel bad, exercise for your mental wellbeing rather than weight loss goals, embrace your curves by wearing whatever you want to and be proud.’

Health and fitness comes in all shapes and sizes, so we asked five women to share their thoughts and feelings about their bodies.

PT and founder of It’s So Simple

Online fitness coach Rachael, 43, the mother of three young children, wants women to feel good about themselves without worrying about body stereotypes.

‘Women should feel comfortable in their own skin, irrelevant of the scales or dress size,’ she says. ‘Fitness should be about improving your life, not weight loss.

‘When I was younger I turned to every fad diet under the sun and developed an unhealthy relationship with exercise and food. When my weight reached 85kg I was constantly tired and lethargic. I wasn’t able to be the mum I wanted to be – and that was my driving force for my change.

‘Now I train six days a week and try to get my steps in walking wherever I can. I eat a well-balanced diet and don’t avoid any food groups. I would never judge my body size by clothing labels. It’s so important to understand that every brand has a different fit.

‘I was almost 40 before I decided to flip the script. I never want my kids to feel that way. I want them to grow up learning the importance of fuelling your body in a healthy way. The importance of becoming strong, not skinny. Working out to help improve their strength. Not because they have to, but because they want to.’

At 100kg+, Beth wants to encourage women of all shapes and sizes to take up physical activity and regularly posts videos of herself squatting 130kg. ‘When I was a teenager, I was heavily influenced by figures like Effy from Skins and Kate Moss,’ says Beth, 30.

‘I desperately wanted to be thin, but I have quite a big frame and it’s something my body could never achieve. After a bipolar diagnosis my doctor suggested healthy eating and exercise, so I got into powerlifting and loved it.

‘I qualified for the English championships this year which I’m proud of and I recently cleaned (lift from the ground to shoulder height) 110kg which I never expected. Appearing on SAS Who Dares Wins was the most physically and mentally challenging thing I’ve done, but my battles with mental health have given me lots of tools to manage mentally tough situations.

‘I get a lot of hate comments telling me to “put down the donuts/cookies/pizza” and when I was struggling again with my eating disorder, my training suffered. But I realised I needed to stop focusing on losing weight and more on health, fitness and being strong.

‘I’m a UK size 18 and a lot of clothes aren’t structured to fit muscular bodies, which I find hard, but I’m so proud of the strength of my body. I think it’s cool that I can lift the equivalent of two large men on either side of a barbell.

‘Body positivity has helped me reject all toxic beauty standards and live a full, exciting life regardless of how I look.’

A national-level gymnast, international swimmer and second ever female to complete in the Individual Elite category at the CrossFit Games, Lucy came 16th – earning herself the title of 16th Fittest Woman In The World and Fittest in the UK.

‘I can’t remember a time when I haven’t done sport,’ says the 26-year-old. ‘I was frequently told to lose weight when I was swimming. I felt like I didn’t fit in. I was too strong to be a distance swimmer and too fit to be a sprinter.

‘Then I discovered CrossFit and the things women were doing looked incredible and it started to change my view on how I wanted to look. As a professional athlete, I train anywhere from three to six hours a day and this is comprised of weightlifting, gymnastics, strongman and cardio capacity work.

‘I’ve had some difficulties with disordered eating in the past so I’m careful to prioritise a good relationship with food, but it’s vital for me to get enough food to fuel my training and recovery.

‘With regards to weight loss, I only worry about it if I feel like it’s going to benefit my performance, and that is a conversation I have with my coach.’

After studying dance at university, Emily went on to become a personal trainer and is very open on her social accounts about the pressures of mental health within the industry.

‘I was always quite slim and had very little muscle tone,’ says the 29-year-old. ‘I hated being small, but had a fast metabolism and found it hard to build muscle and increase my weight. People used to think I ate salad constantly, but I’ve always eaten a lot of carbs. I used to be a swimmer so I couldn’t function without them.

‘I can eat anything between 2,000 to 3,000 calories a day. I do a lot of CrossFit now, training three days a week, with a conditioning class on another day. Now I love how strong I am for how petite my frame is. I have strong legs and they are my favourite part of my body.

‘My biggest achievement is having the mentality I do now. I train if and when I feel like it. I think society has massively improved in its expectations around the desire to be slim.

‘Body confidence means being confident in your own skin and personally, I want to be strong.’

Kat was thrust into the spotlight as an England sports star and has received trolling online about her muscular appearance. She is now on a mission to make female strength more accepted.

‘My dad encouraged me to try rugby and I fell in love with the game,’ says the 36-year-old. ‘Winning the Rugby World Cup is the highlight of my career and because I was so dedicated to sport, any comments I received about my appearance felt pretty good.

‘I might get guys commenting on the size of my arms on a night out, but I’d just think, “Of course I am big, I’m an England rugby player.” Interestingly, when I retired from rugby, I had to adjust my mindset as I no longer had that “purpose.”

‘For a while I would wear clothes that would hide my shoulders or upper body, but now I try to show off my hard work. Not just being strong, but also feeling strong, makes me happy.

‘We recently had a pool table delivered to our house, and the driver made a comment about, “You can probably carry it yourself.” At times in my life, I would have felt self-conscious, but yes, I am strong, and now I am not ashamed of it.

‘The trolling comments about my body were hurtful and I have thought about coming off social media. However, I feel it is important to address and highlight the issue, rather than shy away from it. I want to make female strength more standardised. It’s all about being proud of your body.’

Get in touch by emailing [email protected]