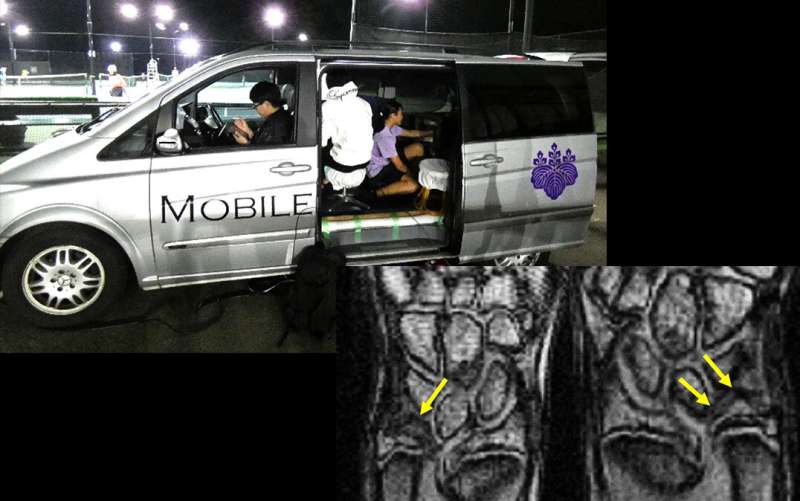 For some sports such as tennis, the wrist is frequently under stress, and an injury to the wrist can prevent an athlete from competing. To aid in the early detection of wrist injuries, researchers at the University of Tsukuba have developed a portable MRI system that enables athletes to be screened for injuries before they exhibit any symptoms.

Athletes have a risk of sports injuries, which can influence their ability to continue training and competing. For injuries such as cartilage tears, early detection and treatment are important for enabling athletes to continue playing sports, because a lack of treatment may affect their ability to compete. Whole-body MRI scanners can identify cartilage injuries; moreover, MRI scans of asymptomatic patients have shown a high rate of cartilage damage, meaning that MRI scans can identify injuries before athletes are even aware of them. When an injury is detected early, treatment can be started before the injury becomes more problematic. Unfortunately, using a whole-body MRI scanner, which is large and expensive, is not realistic for screening athletes outside of healthcare settings.

To address this problem, the research team at the University of Tsukuba recently developed a portable MRI system for baseball elbow injuries. “Because this system is portable, athletes can be quickly screened at a remote location, such as their practice field,” explains Professor Yasuhiko Terada. “Thus, this device can eliminate the need for players to go to a hospital for diagnosis.”

Now, the research team has improved upon their previous device and specifically developed a system to diagnose wrist injuries. Their improvements include an effective shielding method for obtaining high-quality images and an outlet-free power system, so there is no need for a commercial power supply.

The investigators employed their MRI scanner at a tennis school, where they imaged the wrists of male and female tennis players aged 8–18 years old. Among the athletes screened, several were found to have cartilage damage, even though some of these athletes had no other symptoms of an injury. Thus, this device can provide an early screening tool that is convenient for athletes and can help to prevent further injury or damage.

“As future work, further devices can be developed for other joints, such as the ankle or knee,” says Professor Terada. Owing to its convenience, this newly developed device may lead to the development of similar systems for preventing and treating injuries among athletes in all types of sports.