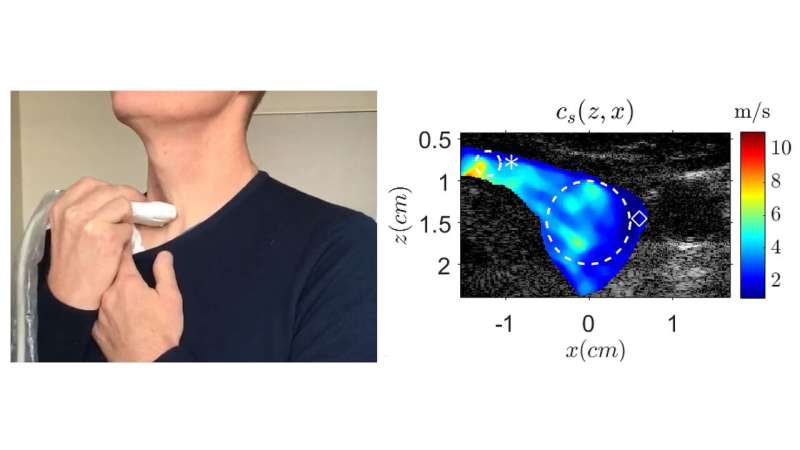 Singing may be the next-generation, noninvasive approach to determining the health of a patient’s thyroid.

Typically, a fine needle is used to detect the presence of a tumor in the thyroid, which most commonly affects children and younger women. However, this method can only detect about 5% of thyroid cancers.

“Developing noninvasive methods would reduce the stress of patients during their medical exams,” said Steve Beuve, one of the authors. “Having to sing during a medical exam can perhaps help release some of the nervous tension even more.”

When a person sings, the vibrations from their voice create waves in the tissue near the vocal tract called shear waves. If a tumor is present in the thyroid, the elasticity of its surrounding tissue increases, stiffening, and causing the shear waves to accelerate.

Using ultrasound imaging to measure the speed of these waves, the researchers can determine the elasticity of the thyroid tissue. This method, which the authors call vocal passive elastography, is an extension of passive elastography, a shear wave propagation tracking technique used in seismology.

“The propagation of shear waves gives us information about mechanical properties of soft tissues,” Beuve said.

Because the elasticity of biological tissues depends on the speed of the shear waves, by asking a volunteer to sing and maintain an “eeee” sound at 150 hertz, approximately the frequency of D3, the group was able to characterize the thyroid and find any abnormally stiff areas.

A key benefit of V-PE is how quick and easy it is. It requires no specialized or complex equipment added to the ultrasound scanner and only needs about one second of data acquisition to complete. Analyzing the data is the longest step, but a computer program that the team developed does the computation automatically.

The group is working on improving the user friendliness of the computer interface and potentially expanding V-PE to include other areas near the vocal tract, such as the brain.