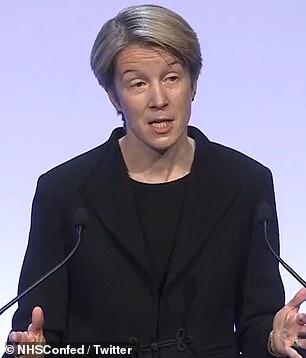 The boss of NHS England today admitted the current state of A&E and GP services is ‘unacceptable’.

She also acknowledged the record waits in emergency departments faced by tens of thousands of Britons each month, saying it ‘underlined the issue’.

It comes after a shocking video emerged last week of patients being told they could be waiting 13 hours to be seen at an Essex A&E.

Latest NHS figures show 24,000 people are waiting 12 or more hours in emergency units before being seen each month — three times the NHS target.

The crisis has been partly blamed on desperate patients turning up at A&E because they can’t get a face-to-face appointment with their GP.

But Sajid Javid warned there was ‘no quick fix’ and insisted the Government would not keep throwing money at the problem.

Ms Pritchard, chief executive of NHS England, also warned the next two years ‘could be tougher’ for the health service than the pandemic. 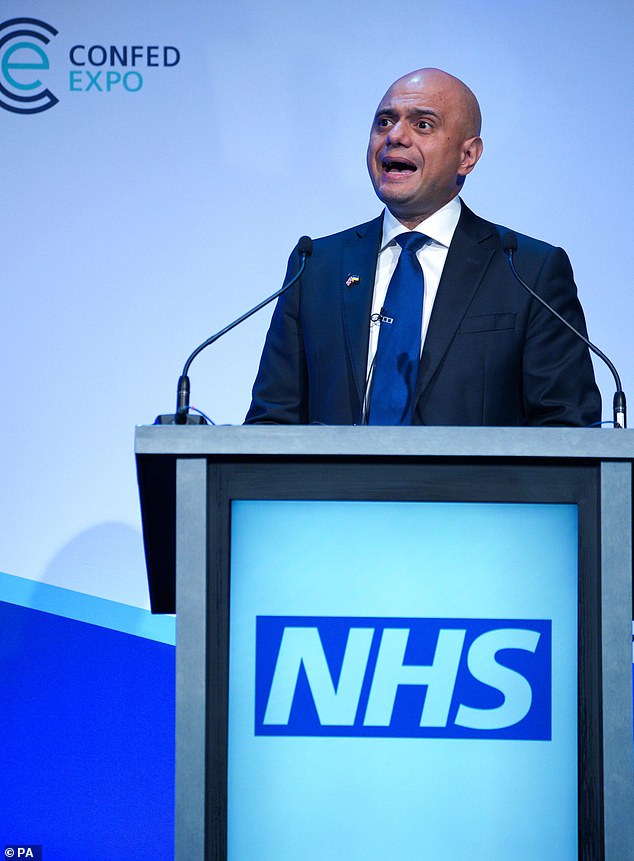 Sajid Javid, the Health Secretary, admitted the current state of emergency and GP services was ‘not working’. But he insisted ‘the answer to all the challenges that we face in healthcare cannot always be more money’

She said doctors were already under as much pressure now as they would normally face during a bad winter.

The cost of living crisis will widen health inequalities and hit those who are vulnerable hardest, she claimed.

‘Experience tells us that these factors and more will show up through NHS services over the coming months,’ Ms Pritchard added.

The NHS in England will not get a penny more in public money despite cries for billions more investment.

Sajid Javid, the Health Secretary, admitted the current state of emergency and GP services was ‘not working’.

But he insisted ‘the answer to all the challenges that we face in healthcare cannot always be more money’.

The NHS is currently enjoying a £12billion a year funding boost — raised through a controversial 1.25 per cent National Insurance hike.

But there are still calls for more cash among NHS leaders.

Mr Javid said: ‘With money, first of all the funding going into the NHS is right, it’s increasing, it was increasing massively even before the pandemic, with the investment through the long-term plan.

‘And because of the pandemic, record amounts of funding was going in.

‘The money that’s being raised through the levy, the vast, vast majority of that is going in to the NHS and that’s right, because first thing is the NHS needs more resources.

‘And that’s why it’s getting them over the next few years, is getting the extra resources that it needs, including for capital.

‘My point about money more generally is that the answer to all the challenges that we face in healthcare cannot always be more money. I think it’s essential that we improve productivity.’

He added: ‘Growing health spending at double the rate of economic growth over the next decade, as I’ve heard some propose, is neither sustainable, desirable nor necessary.

‘I don’t want my children, anyone’s children, to grow up in a country where more than half of public spending is taken up with healthcare at the expense of everything from education to housing.

‘That’s not a fair deal for the British people, particularly young people.’

She made the comments at an annual health service conference in Liverpool today, where the Health Secretary also acknowledged the dire state of GP and emergency services.

Mr Javid told the conference: ‘I don’t think our current model of primary care is working.

‘That won’t be a surprise to you. I know, you know, and I think patients and everyone working in primary care knows, we need a plan for change.’

Around 60 per cent of appointments with GPs are currently in-person, with the rest done virtually, compared to more than 80 per cent pre-pandemic.

Campaign groups, Tory MPs and senior medics have warned that poor access to GPs is partly behind the surge in emergency departments.

Latest NHS England data shows 2million people in England were treated in A&E  departments in April — on par with the highest number ever.

Just 70 per cent of people were seen within the health service’s own four-hour target — the second-lowest rate since records began in 2010.

Ms Pritchard told the conference: ‘General practice will always be the bedrock of the NHS.

‘GPs and the rapidly growing team of other primary care professionals provide treatment, advice and support to more than a million patients every day.

‘But it’s clear isn’t it that the current model of general practice isn’t working as well as it could.’

On pressures in emergency care, she said: ‘Frankly, the situation we see at the moment in emergency departments and ambulance services is as challenging as any winter before the pandemic.

‘April was the busiest ever for ambulance services in terms of calls and Category 1 incidents, and the second busiest for Accident and Emergency departments.

‘But demand isn’t the whole story. The unacceptable rise in 12-hour waits for admission from A&E underlines that the issue is flow.

‘You can trace the line from delayed discharges, to A&E crowding, all the way through to slower ambulance response times.

‘It’s difficult to see social care capacity being significantly expanded ahead of winter, so the NHS must do everything in its power to tackle this.’

She said that NHS is working on an emergency care strategy which will be published by the autumn.

Mr Javid admitted there was no silver bullet to fix the problem but insisted the answer was not more public money.

The NHS is already enjoying a £12billion a year funding boost — raised through a controversial 1.25 per cent National Insurance hike. 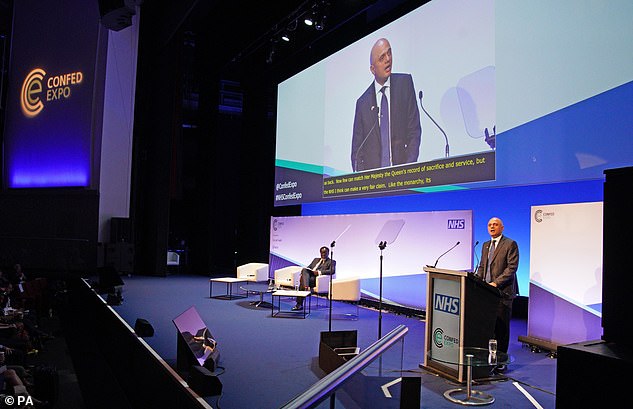 He warned ‘we can’t let it go any higher’, adding: ‘The answer to all the challenges that we face in healthcare cannot always be more money.

‘Growing health spending at double the rate of economic growth over the next decade, as I’ve heard some propose, is neither sustainable, desirable nor necessary.

‘I don’t want anybody’s children to grow up in society where more than half of spending is taken up by healthcare, that’s not a fair deal for the British people, particularly young people.’

Massive new housing estates cropping up across England are only making the GP crisis worse, a Tory MP claimed today.

Speaking at Prime Minister’s Questions, the Conservative said the matter was a ‘life and death issue’.

He told how a 51-year-old father, from his constituency, was diagnosed with terminal bowel cancer after he struggled to get a GP appointment.

Boris Johnson said ensuring new housing areas get proper medical infrastructure is ‘a very important issue’, insisting he ‘will take it up personally’.

The push to develop new housing formed a part of No10’s manifesto pledge to build 300,000 new homes a year.

Yet it sparked warnings that English villages were being ‘swallowed up’ by sprawling towns.

Ministers have been forced to water down their planning reforms to appease Tory voters furious about developers wrecking neighbourhoods and the green belt.

Thousands of patients are struggling to secure appointments, forcing many to go straight to already under-pressure A&E departments.

It comes despite pleas from within the health service for salary hikes to address workforce shortages.

Mr Javid claimed the pandemic was the root cause of the mounting crisis, highlighting that record numbers were now coming forward for urgent treatment after staying at home during lockdown.

Mr Javid also defended his comments likening the NHS to the defunct video shop Blockbuster in the age of Netflix.

Standing by the comparison, he said the NHS must be ‘smarter’ with its funding, by growing the workforce and improving leadership.

‘There are a great deal of things we can do before we even think about turning to the taxpayer again,’ he added.

Mr Javid said he was ‘horrified’ after watching footage taken at the A&E in Princess Alexandra Hospital Trust in Harlow, Essex.

He said: ‘Like most of us, I watched that recent video from the Princess Alexandra hospital at the A&E and I watched it with a mixture of a emotions.

‘There was horror of course at the thought it could be me waiting in that A&E, it could be my children, your children.’

Mr Javid also suggested senior NHS bosses could be sent to failing hospitals in a bid to improve standards.

The review, headed by former military officer General Sir Gordon Messenger, concluded there was an ‘institutional inadequacy’ in the way leadership and management in the sector was trained, developed and valued.

Mr Javid said senior NHS managers should not stay in the ‘walled gardens of England’s best-performing trusts’ and should be incentivised to move to underperforming hospitals.

He told the NHS ConfedExpo conference: ‘We know that in some regions, poor leadership is a constant challenge. That’s an injustice we’re not prepared to tolerate any more.

‘So I’ll make no apologies for encouraging top talent to areas facing more problems, especially some of our most deprived communities.

‘We need the best people in the hardest jobs and getting the right leaders in the right places takes the right incentives.

‘Reform partnerships will be a central way we can spread good leadership to those places.

‘I want to explore whether we make being part of a reform partnership a requirement for underperforming trusts. I believe this could be another powerful way to ensure that the leadership we need doesn’t stay in the walled gardens of England’s best-performing trusts but is there to help turn trusts around.’

Mr Javid said the NHS will have ‘zero tolerance on discrimination, bullying and blame cultures’.

‘The examples of Nottingham, Shrewsbury and Telford and Mid Staffs shows the extremes where this behaviour can take us – standards not being met, complaints being ignored, lives needlessly lost.

‘I was also moved by the insights on culture in the workplace.

‘They found, and I quote the report, ‘too many reports to ignore’ of poor behaviour and that we’ve reached a point where, in some parts of the system, bullying and discrimination are, and I quote, ‘almost normalised’.

‘All of us know, from our own careers, just how toxic this can be because when even just a tiny minority behave that way it can be contagious for behaviour and morale.’