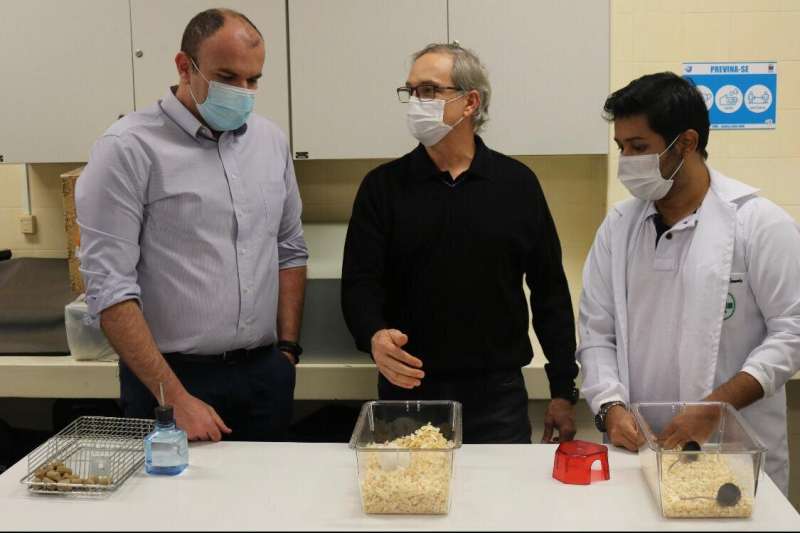 The study was supported by FAPESP and involved collaboration between researchers at São Paulo State University (UNESP) and Brain4care, a startup based in São Carlos. It could result in novel treatments for intracranial hypertension and its complications, including stroke. The main findings are reported in the journal Hypertension.

Intracranial pressure typically increases because of a tumor, encephalitis, meningitis, aneurysm or similar problems, but the researchers showed that chronic high blood pressure can also impair cerebral compliance, leading to a rise in intracranial pressure.

In the study the researchers used vascular clips to simulate renal artery obstruction in rats, restricting the flow of blood to one kidney. The reduced irrigation triggered the pressure-controlling renin-angiotensin system, leading the kidney to release peptides, enzymes and receptors that constrict the blood vessels and raise blood pressure throughout the organism. In the third week of monitoring, when the rats were considered hypertensive, blood pressure rose even more, causing fluid retention and above all boosting cerebral blood flow.

“If the hypertension isn’t treated, the disorder can worsen,” Colombari said. “The rise in intracranial pressure caused by systemic hypertension impairs the brain’s ability to stabilize the pressure [cerebral autoregulation]. This can also lead to blood-brain barrier rupture. Our study showed that the rats’ blood-brain barrier was compromised in the third week. When the barrier is breached, substances and products from the renin-angiotensin system as well as pro-inflammatory substances present in the blood vessels can enter the interstitial space, where the neurons reside, especially regions important to integrative neurohumoral adjustment, such as the cardiovascular, respiratory, and renal systems, among others.”

Blood-brain barrier disruption endangers areas of the nervous system that are important to control cardiovascular pressure as a whole. “How is intracranial hypertension treated now? By inducing a coma or administering a diuretic to resolve fluid retention in the skull. These methods are relatively unspecific and highly systemic. Deeper understanding of the link between high blood pressure and intracranial hypertension points to the possibility of a new field of study in pharmacology,” said Gustavo Frigieri, Brain4care’s scientific director.

Part of the study involved a comparison between intracranial pressure measured by the non-invasive sensor and by the invasive method. The wearable sensor developed by Brain4care has been used to measure intracranial pressure in patients with systemic impairments and has been licensed by the National Health Surveillance Agency (ANVISA) in Brazil and the Food and Drug Administration (FDA) in the United States.

Frigieri also sees plenty of opportunities for applications in basic research. “By comparing the non-invasive and invasive methods, we validated our technology for use in scientific research with small animals,” he said. “It can close gaps left open owing to the aggressiveness of the conventional method, which entails a significant risk of infection because a hole is drilled in the skull to insert a sensor.”

In the sixth week of the experiment, before administration of any drugs, blood pressure was high (190 per 100 mmHg) and intracranial pressure had risen significantly. The researchers discovered alterations in the intracranial pressure pulse waveforms. Each heartbeat (systolic or diastolic) pumps blood to the brain, originating the first peak (P1). A second wave (P2) correlates directly with intracranial arterial volume and cerebral compliance, important factors observed immediately before ventricular diastole.

According to the researchers, the second wave is associated with brain tissue compliance and arterial elasticity in the skull so that the energy of the first wave is absorbed. However, blood-brain barrier disruption and loss of cerebral compliance hinders control of P2, and the first wave becomes stronger than the second.