The Welsh Ambulance Service has the worst delays in the UK, according to official records.

One patient waited more than 62 hours for an ambulance – more than twice as long as the longest delay in any other NHS area.

And a total of four patients in Wales were left waiting for more than 50 hours – over two days – for medical help, Freedom of Information figures have shown.

The Patients Association called the delays ‘extremely concerning’ as it was revealed three English NHS trusts recorded waits of over 24 hours between 2017 and 2018.

Some of those waiting for more than a day for an ambulance to arrive were suffering from mental health or breathing problems.

But NHS bosses say the ‘extreme’ long waits do not reflect the overall quality of ambulance services and millions of pounds are being invested in paramedic care. 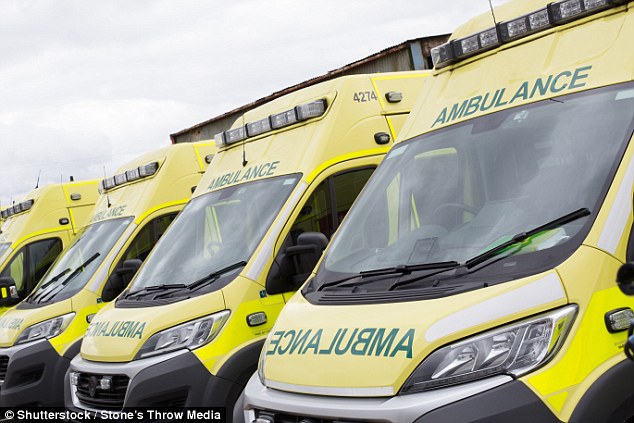 Ambulances in Wales have the longest delays of any service in the UK, according to official figures uncovered by the BBC, which revealed four people waited more than 50 hours for emergency help

An investigation found the Welsh Ambulance Service, which is controlled by the country’s Labour government, has the longest delays of any NHS trust.

Freedom of Information requests by the BBC revealed the longest ambulance waits across the UK, with Wales bottom of the list and the North West the fastest.

But the trusts have insisted the longest delays were for ‘less serious calls’ that were bumped back due to ambulances responding to calls with a higher priority.

Calls for people in life-threatening or urgent conditions are prioritised, whereas those whose illness is less serious are kept waiting longer, officials say.

The new figures show that between 2015 and 2017 the total number of 999 calls for ambulances increased by 15 per cent.

THE REGIONS WITH THE LONGEST AMBULANCE WAITS

Most trusts said they met the national target of responding to the most serious calls in an average of eight minutes or less.

A spokesperson for the Welsh Ambulance Service said: ‘This is a case of the data not telling the full story.

‘The challenges of the 2017/18 winter across the whole NHS system are well documented and we fully accept that a number of patients waited far longer than anyone would like.

‘Similarly, we fully understand how distressing any wait for assistance can be.

‘That said, these figures represent the extreme end of the waiting time spectrum and are neither typical nor do they explain the circumstances of these individual cases.’

The trust argues that people who were left waiting were not urgent cases and some were people simply waiting for a hospital transfer, and were being looked after while they waited.

Other waits may have been caused by bad weather but the NHS insists it does not ignore people who are calling for help.

‘At the Welsh Ambulance Service, we take the care of our patients extremely seriously and have looked in detail at each of the cases to which these data refer,’ the spokesperson added.

‘Many of these are cases which involved hospital transfers where patients were safely in the care of medical teams.

‘In other cases, extreme weather conditions had an inevitable impact on response times, but the majority of patients received support and advice from our clinical contact centre staff and clinicians in the interim.

‘We continue to work hard to deliver the best possible service to our patients.

‘While recognising that there is always more to do, we would like to reassure the public that cases with waits of this magnitude are highly unusual and are generally the result of a specific set of circumstances which is not always evident from the raw data.’

Patients’ rights charity the Patients Association said the waits are concerning and that people are entitled to quality emergency care.

Lucy Watson, from the Patients Association, said: ‘Everybody should be getting the services that they need.

‘We know that demand has gone up on all health services as our population is getting older, and we need to see the level of investment increasing so our ambulances can respond in a timely way.’

An NHS spokesperson added: ‘The NHS recently introduced an Ambulance Response Programme to help services continue to meet the significant increase in demand and ensure that the sickest patients receive the fastest response.

‘An additional £36 million of funding recently announced will boost paramedic crews and improve the quality of NHS ambulance fleets.’