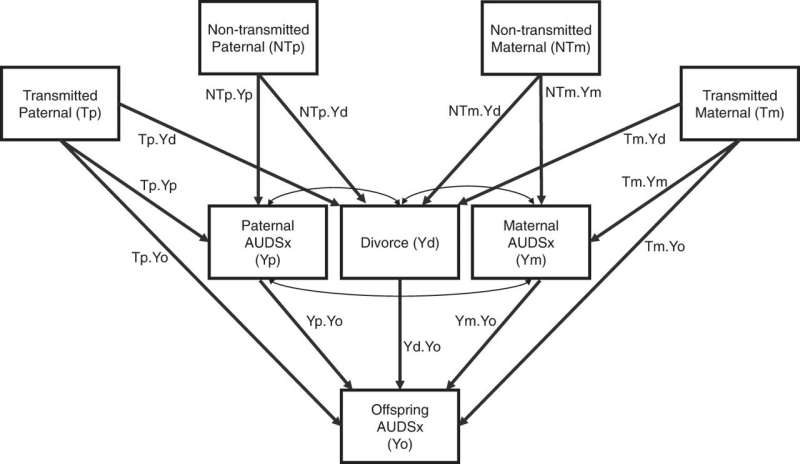 Parents can transmit a genetic risk for alcohol problems to their children not only directly, but also indirectly via genetically influenced aspects of the home environment, such as marital discord or divorce, according to a Rutgers researcher.

The study, published in Molecular Psychiatry, found that children’s exposure to parents’ relationship discord or divorce is associated with the potential for alcohol use disorder as adults.

“Previous research has shown that genes that predispose people to alcohol use disorder also predispose them to experience more conflict in their close romantic relationships,” said Jessica Salvatore, coauthor of the study and an associate professor and director of the Genes, Environments and Neurodevelopment in Addictions Program at Rutgers Robert Wood Johnson Medical School.

“Based on this, we hypothesized that children who are exposed to divorce or parental relationship discord also inherit a genetic predisposition toward alcohol problems—and that experiencing these family adversities might be one pathway through which genetic risk for alcohol problems is passed from parents to their children.”

The researchers used The Collaborative Study on the Genetics of Alcoholism—a large-scale family study designed to identify genes that affect the risk for alcohol use disorder and alcohol-related behaviors—and analyzed data from 4,846 people of European ancestry and 2,005 people of African ancestry who were interviewed when they were approximately age 30.

They assessed whether participants had any symptoms of DSM-5 Alcohol Use Disorder and studied predictors in their parents, including relationship discord, divorce and alcohol use disorder symptoms as well as a measure of their genetic predispositions for alcohol problems.

“The conventional understanding is that genetic risk for alcohol problems is passed in families from parents to children through the sharing of alleles, or variations of genes, from across the genome. What we found is that parents with more alleles for alcohol problems were also more likely to divorce or experience relationship discord, which in turn was associated with greater alcohol use disorder symptoms in their adult children,” Salvatore said.

“Genes can shape our environment: Parents’ genes contribute to the types of environment that they create for us. Thus, one of the ways that genetic inheritance works is through our home environment. And these family adversities can turn the dial on our risk of experiencing alcohol use disorder symptoms later on. In other words, it’s not ‘nature’ or ‘nurture,’ but rather nature [genes] contributing to nurture [family experiences].”

In families of European descent, researchers found evidence that parental alleles associated with increased risk of alcohol problems also increased the likelihood that children in those families would experience parental relationship discord and divorce, which were in turn associated with riskier alcohol behaviors from drinking at earlier ages to greater lifetime maximum drinks to a greater likelihood of developing alcohol use disorder symptoms.

Importantly, these effects were observed even when parents’ own alcohol use behaviors were statistically controlled for in the model.

The study did not find this evidence in people with African ancestry, and Salvatore said further research is needed to determine why.

Salvatore said the findings can lead to new avenues for treatment beyond medication. “One implication of our study findings is that even if someone’s risk for alcohol problems is, in part, grounded in their genetic makeup, the intervention could be environmental and not necessarily pharmaceutical,” she said.