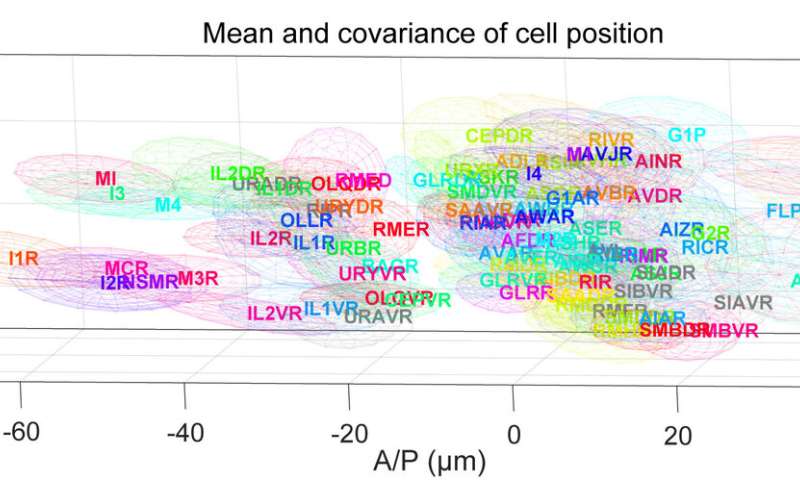 Researchers working to understand the brain at a high-definition, single-cell level of detail have designed a new computer program to identify each nerve cell in fluorescent microscope images of living worms. Previous attempts to automate the identification of individual nerve cells have been thwarted by the fact that the same cell can be in vastly different locations in different worms.

The worms are C. elegans, tiny roundworms common in soil and research labs around the world. Each of the 959 cell types in the animals’ transparent, 1-millimeter-long bodies has been identified, named and mapped, including their 302 nerve cells.

Scientists completed the first map of the C. elegans nervous system in 1986 and have been improving it ever since. More recent projects include OpenWorm, an ongoing global effort to design a cell-by-cell and behaviorally accurate virtual C. elegans—a research-worthy version of a Tamagotchi pet.

Despite their value, generalized brain atlases, so-called connectome maps, are still not helpful for identifying neurons in individual live worms. “Imagine if you knew the names of all the cities on a map, but the cities moved each time you looked. That is what it’s like, trying to compare current brain atlases to living organisms,” said Professor Yuichi Iino from the University of Tokyo, co-author of the recent research paper published in BMC Biology.

Iino’s research group wants to identify and map each nerve cell in living C. elegans so that they can chart the pathways of electrical impulses that make behaviors, learning and memory possible.

C. elegans brain neurons are not trapped in a skull, instead forming a loosely packed group of 150 neurons in the head region of the animal. “The neurons are tiny, and in the head of C. elegans they are surrounding this large bulb that’s part of the digestive system, so they get pushed and pulled around a lot as the animal moves or eats,” explained Iino.

Researchers began by finding unique combinations of genes that, when artificially attached to fluorescent protein tags, would cause 35 small groups of neurons to glow under a microscope. These new genetically modified strains of C. elegans made all of the researchers’ subsequent image studies and computer programming work possible.

The researchers identified individual neurons in 311 worms in total, about 10 worms for each of the 35 neuron groups, and measured the distances and relative positions between pairs of neurons in the microscopy images.

Although neurons were known to shift within each worm, no one expected the neurons to have different “home base” locations in different individuals. The positions of the central cell body of some neurons can vary by more than 0.02 millimeters between different animals, a significant distance for an animal only 1 millimeter long. 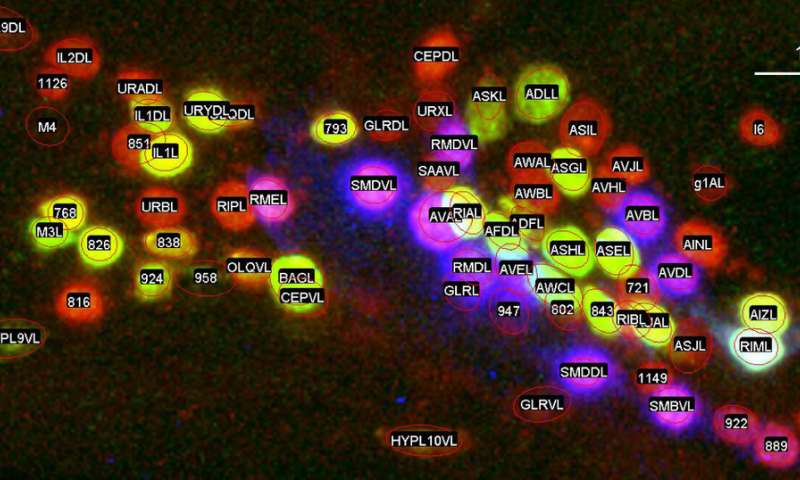 “Individual C. elegans are thought to be uniform because they all have almost the same cell lineages and a stereotyped neural circuit. It was really surprising, though, how large the positional differences are between individual animals,” said Assistant Professor Yu Toyoshima, a co-first author of the recent research paper and member of the Iino lab.

The research team then used their new position variation data and the C. elegans connectome brain atlas to develop a computer program to automatically identify neurons. The program uses a mathematical algorithm to analyze a microscopy image of the C. elegans brain and assign the statistically most likely identity to each neuron based on that neuron’s position in relation to other neurons.

“The algorithm is only 60 percent accurate, which is too low for fully automatic cell identification, but it speeds up our work enough to make other projects possible to understand neural networks based on whole-brain imaging data,” said Toyoshima.

Part of what made this project possible in C. elegans is that every neuron was already known and named. Using a similar technique in other animals would require fine-tuned genetic manipulation to cause groups of neurons to glow under a microscope and knowing how many neurons need to be identified.

This Guy Had Painful Diarrhea After Trying the Carnivore Diet for 2 Weeks
Copyright © 2020 dailytophealth.com.
We and our partners use cookies on this site to improve our service, perform analytics, personalize advertising, measure advertising performance, and remember website preferences.Ok