Well, according to a new study published in the journal Medicine & Science in Sports & Exercise, there are HUGE benefits to be had by doing diminutive workouts. Meaning just a few reps of exercise every few hours could substantially better your health.

Researchers recruited eight men and women and asked them to spend an entire day seated – rising only to eat or for trips to the toilet. The next morning, they consumed a high-fat brekkie shake of melted ice cream and half and half milk, while their metabolic responses were monitored.

On a different occasion, the participants sat again. This time, however, they sprinted as fast as they could on a stationary bike for four seconds each hour (resting for 45 seconds before repeating the sequence five times.) Once again, they downed the breakfast shake the following morning, though this time their metabolic responses totally changed.

Not only did they burn more fat the second time around, their blood triglyceride levels were 30 per cent lower before and after the sprinting sessions. Put simply? Breaking up stints of sitting with frequent, intense and extremely short bursts of exercise had counteracted some of the effects of being sedentary.

Sure, there are many limitations to this study (for example, the small sample size and short-term nature of the experiment.) But as Dr. Ed Coyle, the study’s lead author and a professor of kinesiology and health education explains, these efforts are achievable – especially while working from home.

“When you find yourself sitting for most of the day, try to rise frequently and move, preferably intensely, as often during the day as possible and for as many seconds as you can manage,” he said. 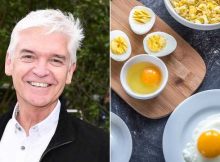