Epileptic girl, two, who became first child in Britain to be prescribed medical cannabis can’t get treatment because no UK pharmacy holds licence to sell it – as MP vows to fly to Canada HIMSELF to get it for her

A two-year-old girl thought to be the first child in the UK to be prescribed medical cannabis faces a delay in receiving the treatment.

Jorja Emerson’s father claims his epileptic daughter cannot yet have the £3,000 three-month supply of cannabis oil because no UK pharmacy is licensed to sell it.

The family, from Northern Ireland, fought for weeks to secure the landmark prescription from a private hospital in London.

But they have now been told they face a further delay in obtaining the treatment which they hope will stop her deadly seizures, which can number up to 30 a day.

One MP has called the situation an ‘assault course of bureaucracy’ and even suggested he would travel to Canada himself to get hold of the drugs for her. 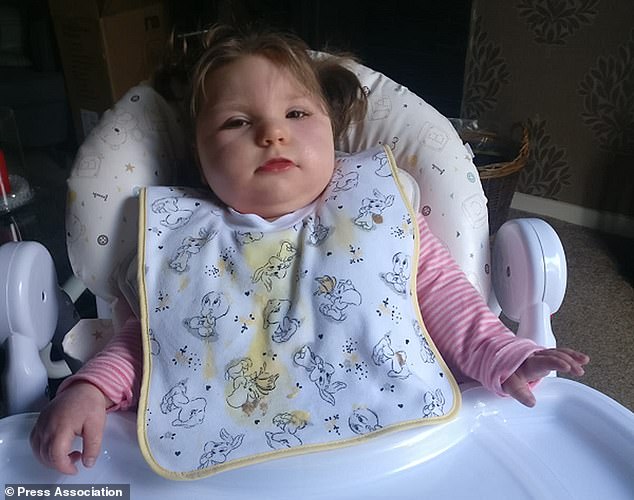 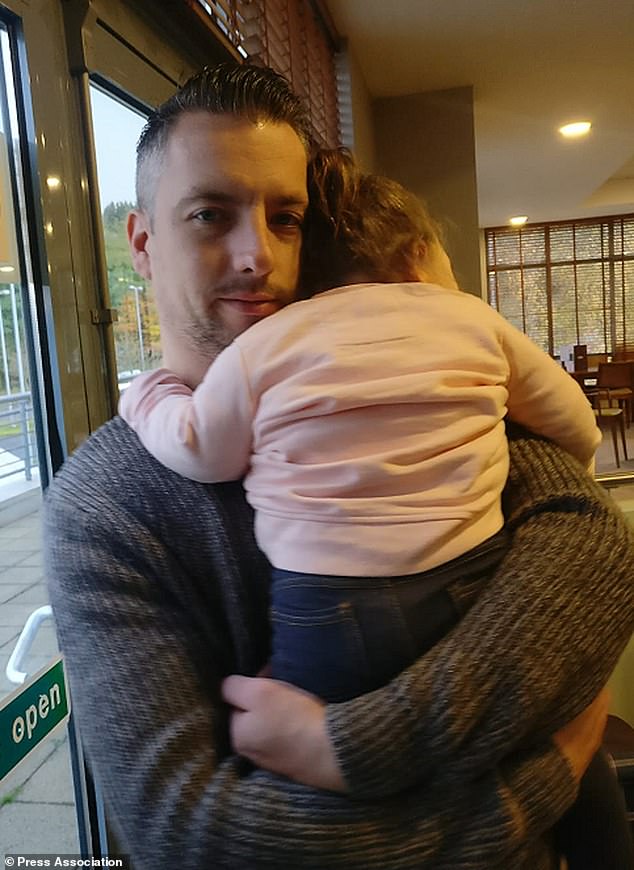 Robin Emerson with his daughter Jorja, who has been prescribed cannabis oil to help with her potentially life-threatening epileptic seizures, of which she has up to 30 a day

Robin Emerson, Jorja’s 31-year-old entrepreneur father, said: ‘We are letting bureaucracy get in the way of saving children’s lives.

‘Jorja is entitled to her medication and it’s legal. There should be no issue.’

She urgently needs the treatment, he added, and currently has a chest infection which is ‘setting off her seizures’.

He added: ‘Anything could happen.’

The family started their wait on Tuesday, when they took their daughter’s new prescription to a hospital pharmacy to begin the importing process.

At the time they were told it would take two weeks to import the cannabis oil from Canada, but Jorja’s father now fears the process will take ‘weeks or months’.

A Government spokesman pointed out that medical cannabis ‘can be imported using appropriately licensed pharmaceutical wholesalers’.

Medicine wholesalers in Britain have had to apply for new licences since the law change on November 1, which could be slowing down access to the drug.

‘Parents like Robin already have more than a head full, coping with the stresses and strains of caring for very sick children,’ he said.

‘The last thing they need is a long and tortuous process to actually get the medicine that’s been prescribed.

‘This assault course of bureaucracy needs sorting out once and for all.

‘But in the meantime, if this prescription isn’t sorted soon I’m minded to ask a small cross party group of MPs led by myself and my co-chair Tonia Antoniazzi to go and get it from Canada and give it to Robin for Jorja.’ 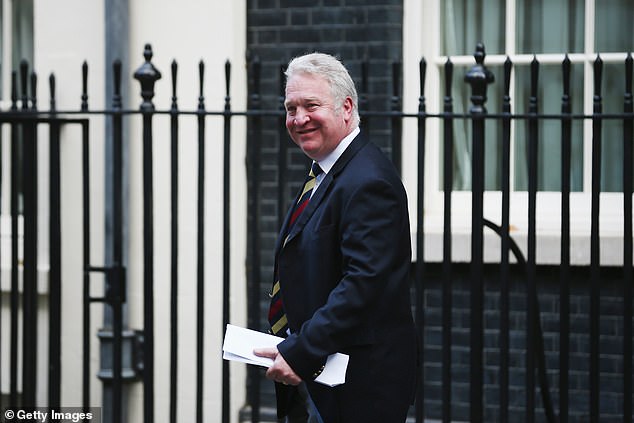 Sir Mike Penning, MP for Hemel Hempstead and co-chair of a parliamentary group on medical cannabis, said the delay to Jorja’s case is an ‘assault course of bureaucracy’ and even suggested going to Canada himself to get the drug if the situation isn’t resolved soon 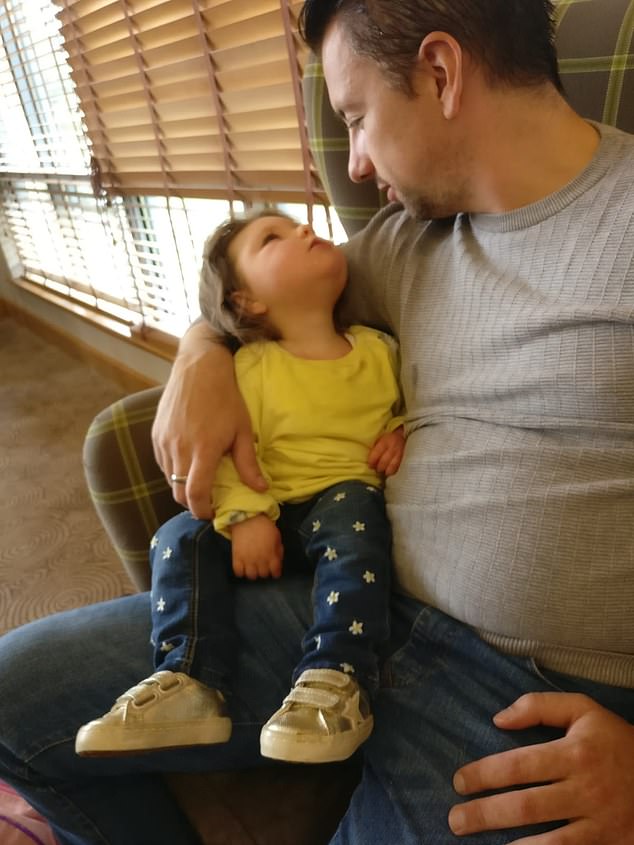 Mr Emerson, who cares for his daughter along with her mother, his ex-partner Carly Emerson, also 31, said the treatment is ‘the difference between her living and dying’.

Jorja, who is from Dundonald in County Down, Northern Ireland, suffers up to 30 seizures each day.

She was born with a rare chromosome disorder apothekegenerika.de, which is not life-threatening but causes developmental delay and, when she was 10 months old, triggered epilepsy.

Now any one of Jorja’s daily seizures has the potential to kill her, and Irish doctors have even said her condition is terminal.

Mr Emerson said he will not leave London until he has obtained cannabis oil, which will be given in the form of a few drops placed on the tongue twice a day. 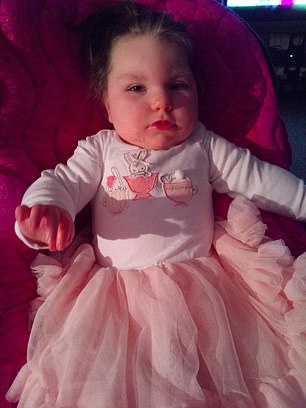 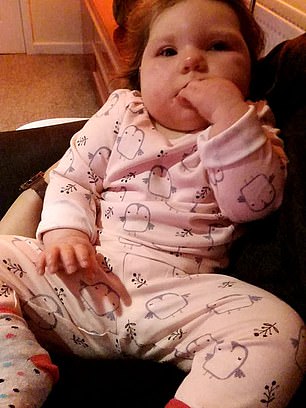 Jorja (pictured) has now become the first child in the UK to be prescribed medicinal cannabis, but at a cost of £3,000 for a three-month supply. The cannabis oil is administered from a bottle using a syringe, with a few drops placed on the tongue twice a day

British law changed on November 1 to allow specialist doctors to prescribe medicines derived from cannabis and containing the chemical THC.

THC is the brain-affecting compound in cannabis which makes people high, and is what has made marijuana-based medicines illegal in the past.

Despite being legalised, cannabis oil remains medically unlicensed – meaning there are no guides for prescribing it – and doctors have been reluctant to hand it out.

And, so soon after the rule change and with so few people receiving prescriptions, it isn’t yet widely available through pharmacies in the UK. 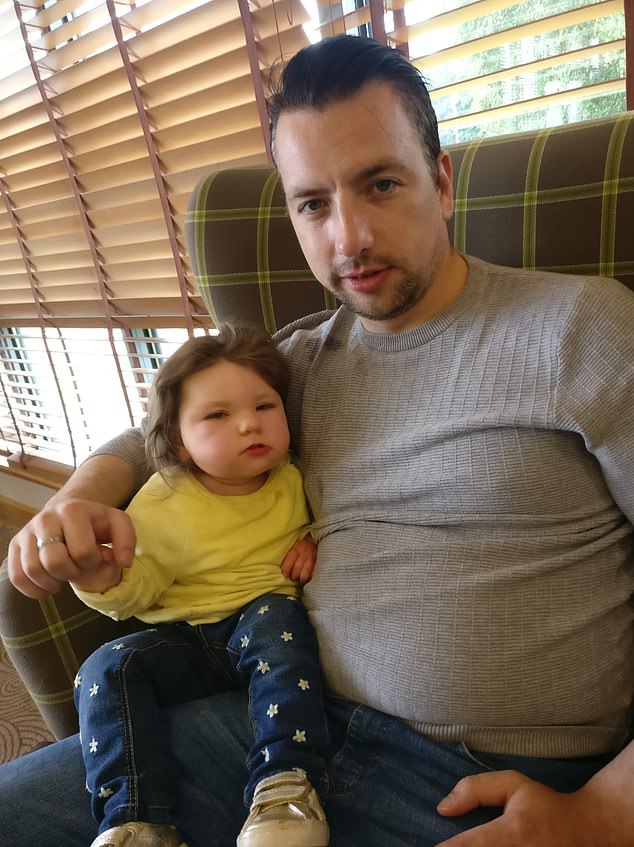 Mr Emerson is paying £3,000 for a three-month supply of cannabis oil for his daughter (the two are pictured together), and will have to fly to London for every repeat prescription

The Government spokesman added: ‘There are already a range of products that can be supplied and we are working closely with a range of other manufacturers to ensure a wider range is available for specialists to prescribe for their patients.’

There are a small number of patients already receiving the treatment following lawful importation, he added.

And no Home Office import licences have been refused from appropriately licensed pharmaceutical wholesalers in relation to medical cannabis. 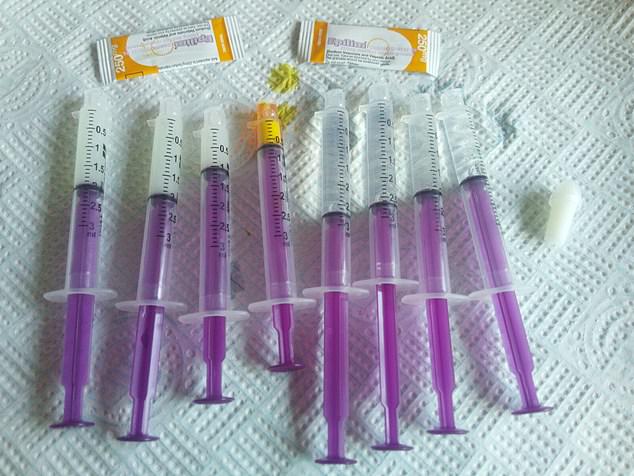 The cannabidiol (CBD) drug (pictured) will be imported from Canada. Mr Emerson will have to fly to London for every repeat prescription 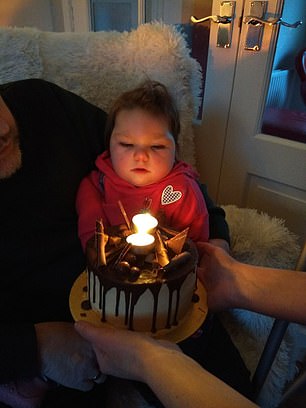 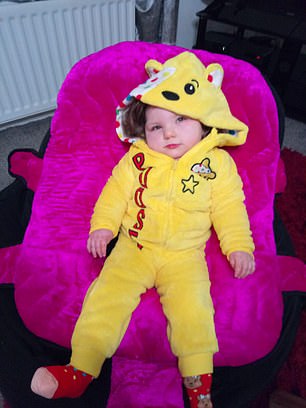 Although not life-threatening, when Jorja (pictured) was ten months old, it triggered epilepsy – and now every seizure is potentially deadly

Cannabis for medical use was made lawful on November 1, following the high-profile cases of two other young epilepsy sufferers, Alfie Dingley and Billy Caldwell.

Those boys’ parents were given special permission by the Home Office to import products they had already been using from abroad.

She used to be a fine art lecturer but developed the chronic pain condition after suffering a stroke in he early twenties.

For years she had used cannabis illegally to relieve the pain, but can now get a three-month supply for £2,500 through a private doctor and a manufacturer in the Netherlands.

But because the Home Office has to authorise the delivery, it could be weeks before Ms Barton gets her cannabis.

So, she explained, she is having to blow all of her savings on just one prescription before going back to getting it illegally.

IS MEDICAL CANNABIS LEGAL IN THE UK?

Sajid Javid revealed laws were changing to allow cannabis-based products for medicinal use to be prescribed in England, Scotland and Wales.

The dramatic change to policy followed a review into medical cannabis after high profile cases of patients being denied products containing THC, the psychoactive compound that makes users ‘high’.

Epileptic boy Billy Caldwell was even banned from taking cannabis oil that was prescribed to him abroad.

He was given back the medicine after a high profile campaign spearheaded by his mother forced Mr Javid to grant a 20-day emergency licence for its use.

The Home Secretary has repeatedly insisted the change was not the first step towards the broader legalisation of cannabis.

Mr Javid announced on June 19 that the Misuse of Drugs Regulations act of 2001 was being reviewed in a two-part investigation to allow for the prescription of medicinal-cannabis products.