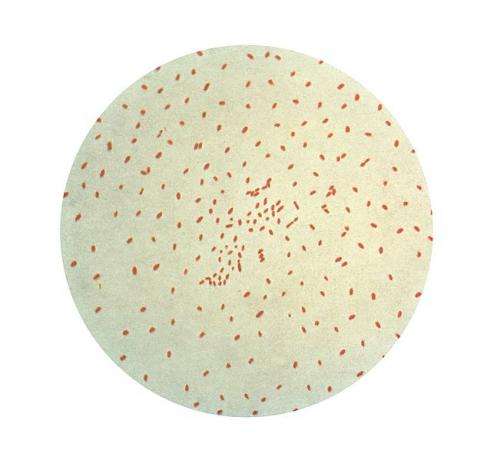 In an unusual new study involving thousands of bacterial sequences across five continents, scientists have tracked Bordetella pertussis—the bacteria that cause whooping cough—covering the pathogen’s evolution and spread worldwide since 1935.

Aside from producing a first-of-its-kind understanding of the bacteria, the analysis of samples from 23 countries also illustrates how changes in vaccine policy have impacted a variety of B. pertussis strains. The switch from whole-cell DTP vaccines to DtAP inoculations apparently played a role in how the bacteria have mutated and spread.

Writing in Science Translational Medicine, an international team, led by scientists at Insitut Pasteur in Paris, emphasize that population immunity to any pathogen is thought to drive that infectious agent’s evolutionary dynamics. And human immunity to B. pertussis is a prime example of how the immune response to it has helped shape genetic changes in various strains of the bacteria and their spread globally. Despite vaccination, the bacteria still cause 160,000 whooping cough deaths worldwide each year.

“This work provides a detailed view of the strength of spatial structure and rate of geographic spread for a pathogen that is responsible for tens of thousands of deaths each year, highlighting how B. pertussis spread is a globally interconnected issue,” Dr. Noémie Lefrancq and colleagues assert in the journal.

The study’s findings carry potent implications for the management of pertussis and address a core question in infectious disease research by explaining how human population immunity can influence the genetic diversity of pathogens.

Lefrancq and colleagues sought to define the major drivers that have influenced the spread and evolution of B. pertussis strains since the Great Depression. The researchers began by examining 3,344 whole-genome B. pertussis sequences from 23 countries on five continents, starting in 1935. They identified an average of 28.1 transmission chains within subnational regions, and observed that specific strains of the bacteria took 5 to 10 years to homogenously spread throughout Europe and the United States.

The first pertussis vaccine was introduced in the 1940s and was made from the whole bacterium, hence the term whole-cell vaccine. The form in use for decades was the DPT vaccine—diphtheria, pertussis, tetanus—which prompted long-term immunity against B. pertussis.

A problem with the whole-cell pertussis component of the vaccine was its tendency to cause fevers, and albeit rarely, seizures in some babies. In the 1980s, irate U.S. parents blamed the DTP vaccine for injuring their children. Their lawsuits forced several pharmaceutical companies out of the vaccine business. The cause of the adverse reaction was traced to a potent immune system stimulant called an endotoxin, which is contained in the cell membrane of pertussis bacteria.

A newer “acellular” version of the shot was then developed and administered for the first time in the 1990s. The trouble with the acellular inoculation, part of a vaccine called DtAP—diphtheria, tetanus and acellular pertussis—is that the pertussis portion isn’t as durable as the pertussis component in the old DPT vaccine. Children have developed post-vaccination whooping cough.

Additionally, the switch from whole-cell to acellular pertussis vaccines at the end of the 20th century led to a rise in hardy B. pertussis strains that lacked pertactin—a virulence factor. The emergence of this strain has reduced the hardiness of other forms of the bacteria, a development that scientists trace directly to pertussis vaccination policies.

“Our findings highlight the role of vaccine policy in shifting local diversity of a pathogen that is responsible for 160,000 deaths annually,” Lefrancq wrote. “As with other pathogens, competitive interactions between Bordetella pertussis strains drive infection risk.”

Pertussis is a serious and sometimes deadly respiratory illness that affects people of all ages, but is particularly deadly among babies. The bacteria attach to the tiny, hair-like extensions lining the upper respiratory system—the cilia—and release cilia-damaging toxins, which can lead to swelling of the airways, according to the U.S. Centers for Disease Control and Prevention.

Affected adults develop a persistent hacking cough that is difficult to shake, but they can pass the bacteria to children and infants in aerosols. Babies may not have a cough at all, but instead, struggle to breathe, and may even stop breathing. In the era before the vaccine, whooping cough was a serious childhood infection and cause of death.