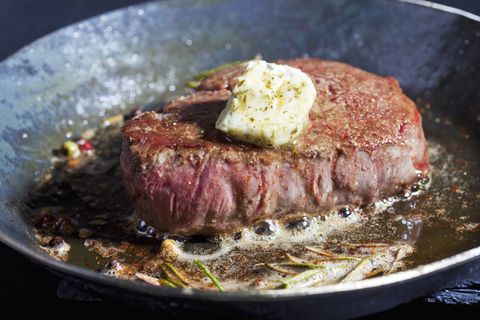 Recently I had a client tell me that she and her husband were eating more than two pounds of bacon a week—usually three strips for breakfast and one or two with a salad for dinner. I’ve been a dietitian for almost 20 years. Few things surprise me. But I had to ask: “Why?”

She told me that her husband had heard about a new diet on TV, the keto diet, and they decided to try it. Six months and countless packages of bacon later, her husband had lost 20 pounds and said he felt more energetic.

I’m beginning to hear more and more people lecture me about the benefits of the ketogenic diet. “Keto burns fat fast! It turbo-charges your energy! It fights disease! You can eat all the bacon you want!” But as is so often the case with diets, underneath all the initial excitement, there’s a gut check. Here’s everything you should know about the ketogenic diet and whether or not you should try it for yourself.

What the heck is ketosis anyway?

Ketogenesis has existed as long as humans have. If you eat a very low amount of carbohydrates, you starve your brain of glucose, its main fuel source. Your body still needs fuel to function, so it taps into your reserve of ketones, which are compounds the liver creates from fat when blood insulin is low. This process is known as ketosis: It’s like when a hybrid car runs out of gas and reverts to pure electricity.

“Your liver produces ketones all the time, but the rate depends on carbohydrate and protein intake,” says Jeff Volek, Ph.D., R.D., a professor of human sciences at Ohio State University. When the majority of your diet is made up of of carbs and protein, ketogenesis slows. Replacing carbs and protein with fat will put your body into ketosis, thus ramping up ketone production. This takes about three days to induce.

Can’t you take ketone supplements? No. While it is possible to elevate ketones by taking them, “without the low-carb stimulus, there is no net increase in ketone production, no decrease in insulin, and no net increase in fat oxidation,” says Volek. Don’t trust trainers or “body hackers” who say you can induce ketosis quickly without changing your diet.

What can you eat on the keto diet?

A ketogenic diet requires that fat comprise 60 to 80 percent of your total calories. Protein makes up about 20 percent, while 10 percent comes from carbs. Generally speaking, it’s best to eat between 20-30 grams of carbohydrates per day in order to maintain ketosis. That’s the equivalent of about half a medium bagel.

If this sounds like Atkins, it’s close, but “ketogenic diets tend to be more severe in carb restriction and have a more moderate protein restriction,” says Spencer Nadolsky, D.O., author of The Fat Loss Prescription.

Though you can eat bacon on a ketogenic diet, the rest of the spectrum is limited. Starchy vegetables like potatoes, corn, and squash are too high in carbs. Same with most fruits. Milk, beans, rice, pasta, bread: nope.

However, bacon is still heavily processed and has been linked to an increased risk of cancer and heart disease, so you may not want to eat it at every meal. To stay as healthy as possible, keto dieters should eat plenty of low-carb vegetables like red bell pepper, kale and cauliflower.

The rules of keto impact more than just mealtime, too, since juices, sodas and alcohol will knock you out of ketosis.

A sample day on a ketogenic diet:

Most men consume nearly half of their calories from carbs, according to the Centers for Disease Control and Prevention, which means cutting your intake to less than 10 percent will be a challenge.

Are the benefits worth scaling back on all that starchy goodness?

What are the benefits of the keto diet?

Although studies have shown that the keto diet can reduce seizures for children with epilepsy, there is no evidence indicating that keto helps with other brain disorders or improves mental cognition, according to Harvard Health Publishing. Some studies show that keto may lower blood sugar for people with type 2 diabetes, but there is not enough long-term research to determine whether it’s safe and effective for diabetics.

When it comes to weight loss, “there is no question that ketosis does work in the short term,” Dr. Konstantinos Spaniolas, Associate Director of the Stony Brook Metabolic and Bariatric Weight Loss Center in New York, previously told MensHealth.com.

Anecdotally, lots of men have told MensHealth.com that the keto diet helped them lose large amounts of weight.

According to Spaniolas, keto helps with weight loss by reducing cravings.

Unfortunately, there’s no long-term data on ketogenic diets versus other diets. In a 2015 Italian study, those on a ketosis diet lost 26 pounds in three months. About half of the participants stayed on the diet for a year but lost little additional weight in the next nine months. People in a 2014 Spanish study who followed a very-low-calorie ketogenic diet lost an average of 44 pounds in a year—but a third of them dropped out, possibly because it was too hard to maintain.

What are the side effects of the ketogenic diet?

People who begin the diet often develop “Keto Flu,” as their bodies get accustomed to eating fewer carbs. During this time you may experience headaches, nausea, fogginess, muscle cramps and fatigue. Symptoms last about a week, but staying hydrated and getting ample sleep will help with cramps and exhaustion.

Aside from Keto Flu, you may notice a few other unpleasant side effects. Acetone — yes, the ingredient in nail polish remover — is one of the compounds found in ketones, so your breath may be stinkier than normal. Pooping may be difficult since cutting carbs will lower fiber intake, but a fiber supplement will help keep you regular.

Is the ketogenic diet for you?

This may sound like a cop out, but the best diet is the one you stick with. For Volek, who’s been following an ultra-low-carb diet for two decades, it works.

If you can’t stick to it, then it probably won’t.

“This is the problem I have with all of these fad diets,” registered dietitian Andy Yurechko, MS, RD, of Augusta University Medical Center in Georgia, previously told MensHealth.com. “A healthier type of diet is something you can do every day of your life.”

Since maintaining ketosis requires strict carb counting, this diet works best for people who are diligent.

Still, there are a few healthy habits from the keto diet that are easy to adopt:

Instead of thinking about the overall number of carbs you’re eating, assess what those carbs provide to you. Do the majority of your carbs come from fruit and vegetables, with a payload of fiber and disease-fighting antioxidants? Fantastic. Or are you consuming them in the form of added sugars (cookies, candy, soda) or refined flour? If you are, you know what to do.

The ketogenic diet may seem like the Jekyll to the Hyde-like low-fat craze of the 1990s. The bulk of current research finds that the middle ground between the two extremes is more beneficial for overall health. Make it easy for yourself: Eat at least two servings a week of fatty fish (salmon, sardines, mackerel) and cook with a variety of quality fats (olive oil, canola oil, avocado oil) throughout the week.

Oh, and you might be wondering—how’d things turn out with the bacon beaus? Their experiment worked until life changed. They had a kid. They made a big move. They stopped the diet. “It was too hard to maintain,” she told me. Proof that all the bacon you can handle even grows boring after a while.