An anti-ageing pill could be in the making after scientists found a way to double the lifespan of a worm.

Switching off a gene believed to trigger the body’s decline made roundworms live more than twice as long as usual in an experiment.

And the same long-lived worms also gave birth to healthier, more fertile offspring suggesting the benefits would pass down through generations.

Experts say finding the equivalent internal process in the human body could make the science apply to us, too. 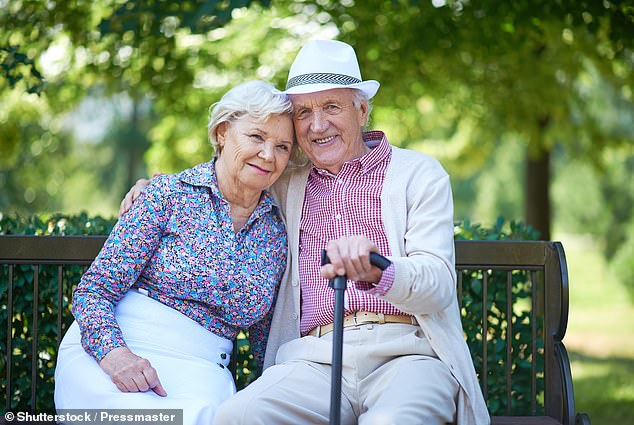 People could one day live longer with the help of gene-editing which can turn off the gene which causes ageing to damage the body, according to researchers (stock image)

Researchers from the University of East Anglia stopped the function of a gene called DAF-2 in a group of Caenorhabditis elegans – 1mm-long worms.

By stopping this gene the scientists more than doubled the average life of the tiny creatures, which are found in soil.

They believe this is because the chemical stimulated by that gene is one which controls growth – while it necessary to help the animals reach maturity to be able to reproduce, it continues to age them without any benefits in later life.

Reducing quantities of the chemical once the worm reached adulthood slowed down its life cycle, the study suggests, putting off the inevitable decline of its body.

‘It is often thought we age because of a slow accumulation of unrepaired cellular damage in our bodies,’ said Dr Alexei Maklakov, study co-author.

‘And that ageing is the result of energy trade-offs between growth, reproduction and survival.

‘But we now know that switching off the function of certain genes in adulthood can increase longevity without a reproduction cost.

HOW WE ARE ATTRACTED TO PEOPLE WITH SIMILAR LIFESPANS

Researchers have found people are unwittingly drawn to those with a similar life expectancy to them.

And, according to experts at the University of Edinburgh, humans also seem to unconsciously select mates who share similar risks of illnesses such as high blood pressure or heart disease.

This, they say, could help explain why long-term couples often suffer from the same ailments in later years and can have similar life spans.

Scientists examined data from the UK Biobank – a major study of genes and lifestyle factors linked to health which involves more than half a million people.

The similarities are greater than would be expected by chance, experts said, suggesting people inadvertently choose a mate who shares the same disease risks as themselves.

Given that many ailments are not visible when people choose their partners, experts say the surprising finding is most likely a result of choosing a mate with shared lifestyle factors that are genetically linked to disease.

The research was published in the journal Heredity.

‘An emerging new theory is the genes that age us are programmed to make us grow and reproduce in early life, but when their function “runs-on” unabated in later life it starts causing problems.

‘If this is true, then we should be able to stay younger for longer by reducing high levels of gene signalling – or “shutting down” these genes in later life.’

The key to keeping a creature alive for longer, Dr Maklakov’s team suggests, is turning off the ageing gene at the right time.

When past research has managed to lenghten the lives of worms, they also destroyed the animals’ ability to have children – an unacceptable trade-off.

But the worms in this study in fact had healthier children, suggesting human lives could be safely extended by manipulating their genes in the same way.

The worms used in the study have an average life span of three weeks, with some living for six weeks or more in the experiment – their genes are 80 per cent the same as humans’.

Dr Maklakov added: ‘Ageing can result from accumulation of unrepaired damage with age.

‘However, it can also result simply from suboptimal regulation of gene expression in late-life.

‘Understanding the importance of these two processes is important both for our understanding of the evolution of ageing, and for the applied programmes aimed at lifespan extension.

‘We want to establish which of the two processes is more prevalent across the tree of life.’

The research was published in the journal Evolution Letters.