Heartwarming footage shows a puppy running to the fridge and fetching his chronically-ill owner a sports drink when she is suffering from life-threatening blood sugar low.

Mel Lucas, 25, from Tampa, Florida, suffers from the hyper-mobility disorder Ehlers Danlos Syndrome (EDS), as well as hypoglycemia, which can cause her blood-sugar levels to fall so low she is at risk of seizures and even death.

She adopted the now seven-month-old Golden Retriever Godric last April when he was just weeks old before quickly training him to pick up things she dropped and even soothe her migraines by performing his own version of a massage.

Godric also helps to calm Miss Lucas, who suffers from PTSD, and will eventually help her walk when her EDS leaves her immobile.

She said: ‘Godric saves my life every single day. We’re the best of friends. He’s my entire world and I don’t know what I would do without him. We do everything together.’ 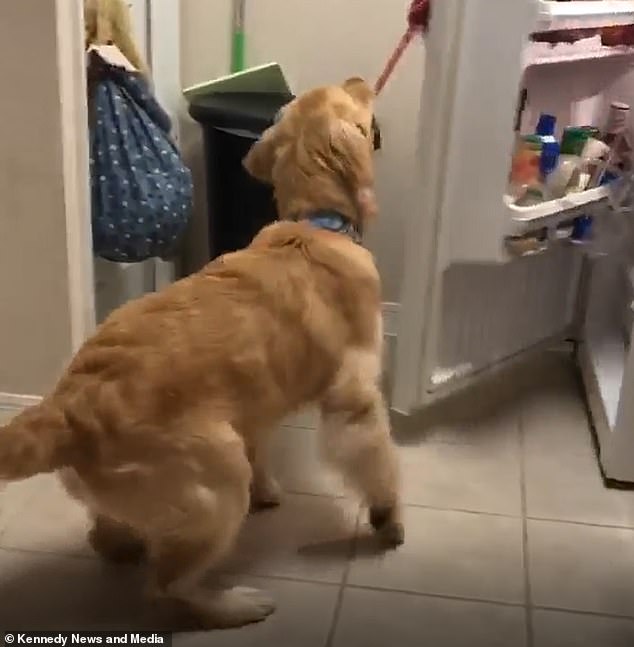 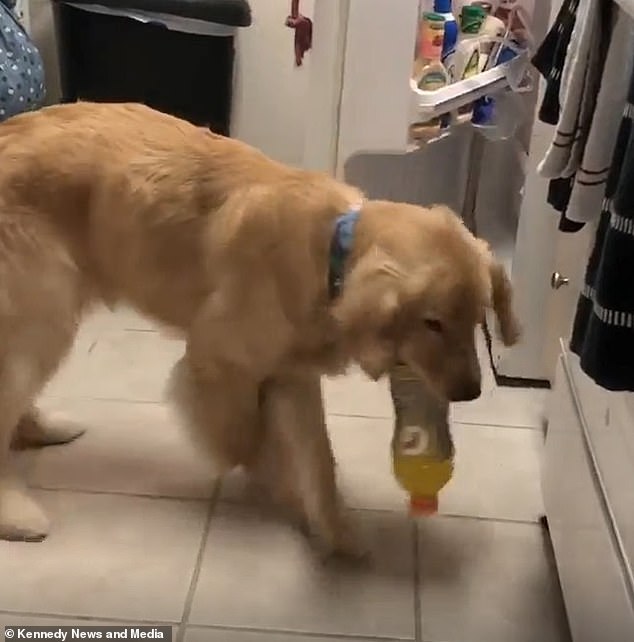 The puppy can read his owner’s blood sugar monitor, which tells him to grab the drink. Although Godric was not adopted to be a service dog, it took him just two days to learn the skill 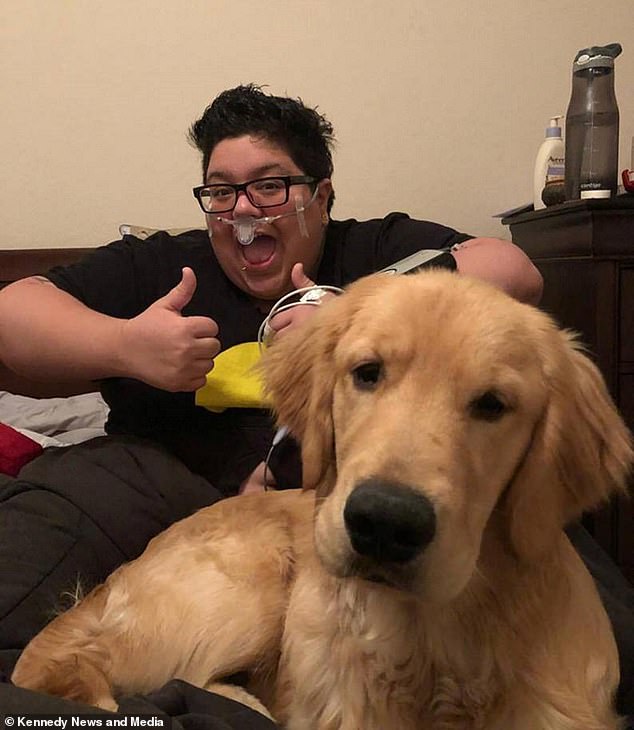 His owner Mel Lucas suffers from the hyper-mobility disorder Ehlers Danlos Syndrome, as well as hypoglycemia, which can cause her blood-sugar levels to fall so low she is at risk of death

Speaking of her disorders, Miss Lucas said: ‘I have been diagnosed with EDS, post-traumatic stress disorder (PTSD) and hypoglycemia, all in the last couple of years.

‘As well as joint hyper-mobility, EDS can also affect the internal organs such as the liver, lungs and heart, and result in low blood sugar and elevated heart rate.

‘I’ve gotten pretty good at managing it on my own but Godric helps when i have a flare up.

‘My blood sugar drops three times a week now compared to the 10-plus times it used to be a year ago.

‘He’s still learning to catch onto blood sugar drops, but out of the three times, he notifies me twice. Once, he did it while driving and I was able to pull off into a gas station and get a quick snack.’

Although Miss Lucas did not adopt Godric with the intention of him being a service dog, it took him just two days to learn to retrieve things from the fridge. 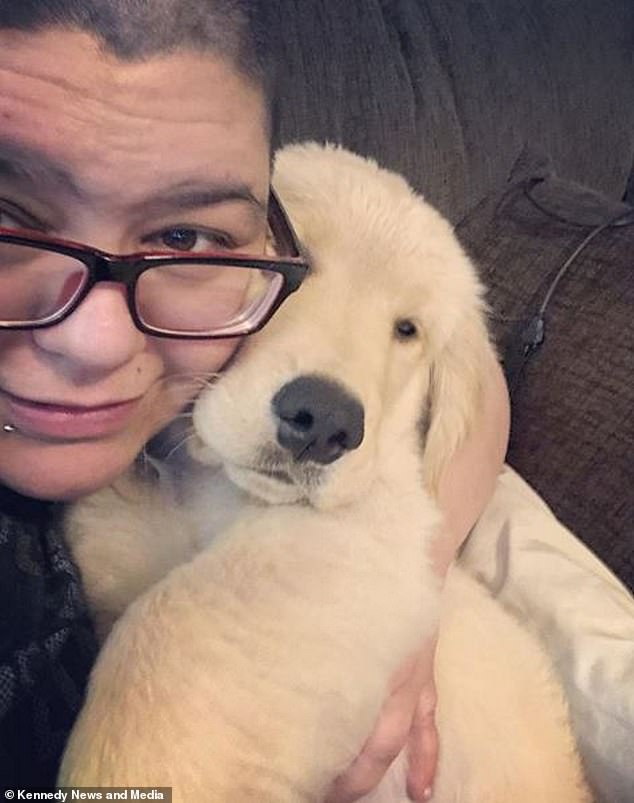 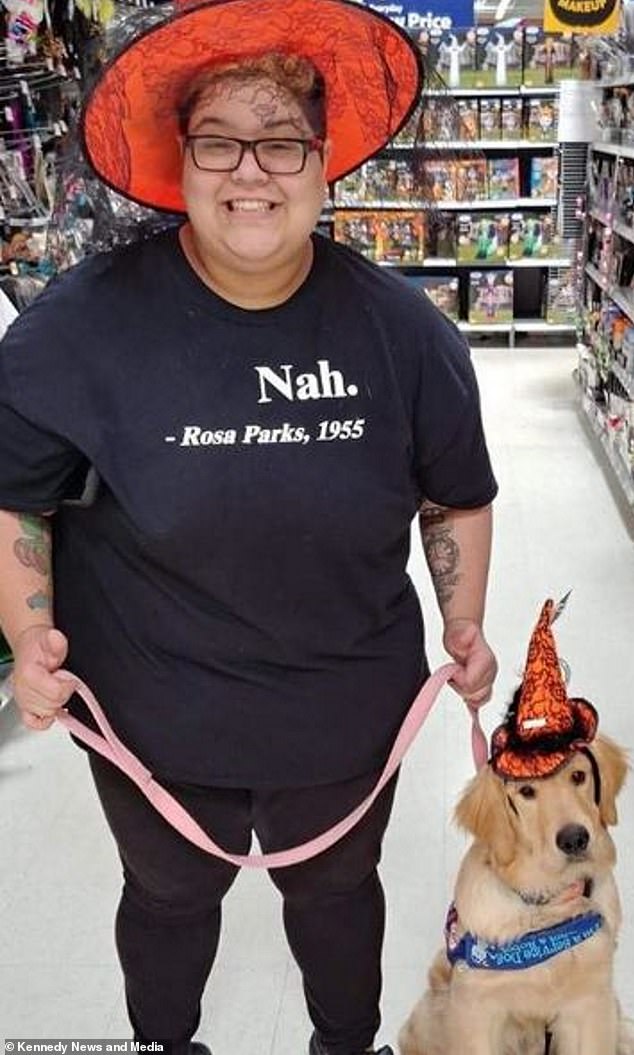 When Miss Lucas’ mobility disorder progresses, she will rely on Godric to help her get about 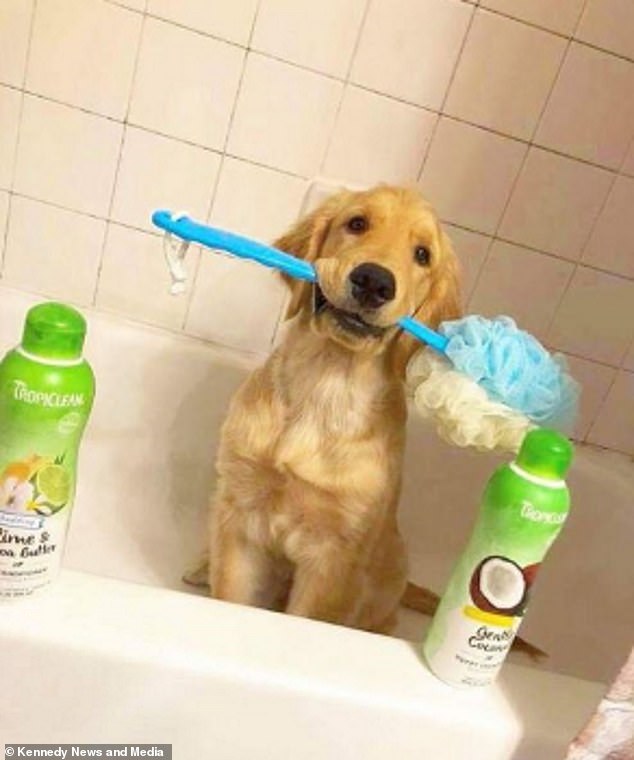 The puppy even picks up things for Miss Lucas, making everyday tasks like showering easier

Godric not only saves Miss Lucas’ life regularly, but also lies on her different pressure points to help control her pain.

The clever puppy can even sense changes in his owner’s brain chemistry that help him warn her of migraines half an hour before they start to become painful.

Miss Lucas said: ‘I don’t get them often but he will let me know 30 minutes beforehand by nudging and licking my hands or face. Dogs pick up on migraines by a chemical change in the body that they can smell.

‘Deep pressure therapy is basically where the dog lays on specific pressure points on the body to help release the serotonin chemical from your brain which soothes and calms me.

‘Once he is older he will be helping with forward momentum pull to help me walk.

‘He’s still working on learning to respond to the nightmares and panic induced by my PTSD.’

Although he has taken on much more responsibility than other puppies his age, Miss Lucas admits he still enjoys getting up to mischief.

She added: ‘He’s still very young so he does get into trouble from time to time, especially when he’s bored. He’s responsible when he needs to be – but he can be a puppy too.’