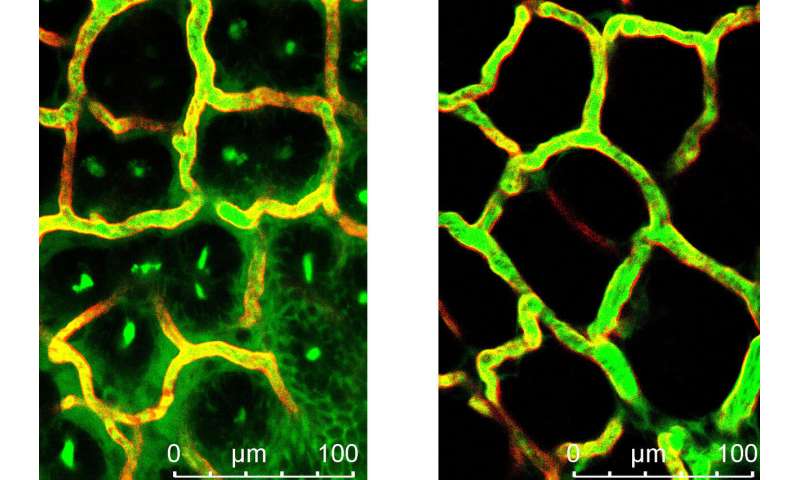 In Germany alone, there are around 400,000 patients who suffer from chronic inflammatory bowel diseases. For the first time, researchers at Universitätsklinikum Erlangen have discovered that dysfunctions in blood vessels play a significant role in the development of such diseases. In experimental model systems, the progression of the disease slowed down significantly by eliminating these dysfunctions. The researchers have now published their results in the Journal of Clinical Investigation.

Diseases in humans are often caused by malfunctioning cells. Epithelium cells, which form the barrier between the bowel and surrounding tissue, and inflammatory cells have been the focus of investigations of the mechanisms of chronic inflammatory diseases of the bowel. While it is well known that inflammatory cells can only reach the relevant tissue via blood vessels, the role of blood vessels in chronic inflammatory bowel diseases has not been very well researched. A group of researchers in molecular and experimental surgery at the Department of Surgery and interdisciplinary collaborators have now conducted an in-depth investigation of the role of blood vessels.

The interdisciplinary cooperation project, which was primarily implemented by Victoria Langer as part of her doctoral thesis, discovered that the blood vessels of patients with chronic inflammatory bowel disease are especially permeable. In molecular analyses, the researchers identified the cause as a malfunction in the cell-to-cell interaction in endothelial cells. Endothelial cells form the lining of blood vessels and are responsible for maintaining vessel wall impermeability. The dysfunction is caused by a specific cytokine known as interferon-γ, which is present in higher concentrations in chronically inflamed intestinal tissue. The increased permeability of blood vessels was proven in various experimental models and in patients with chronic inflammatory bowel diseases.

The significance of blood vessel permeability was demonstrated using genetic methods in experiments in animal models, as the ability of endothelial cells to react to interferon-γ was inhibited, which significantly slowed down the progression of the disease. A significant clinical finding is that the drug Imatinib (Glivec), also inhibits vessel permeability, significantly suppressing disease progression. Imatinib (Glivec) is currently used to treat cancer.