Concussions are more damaging to athletes with ADHD: Study finds a greater risk of depression and long-term anxiety

Concussions are more likely to cause depression in athletes with ADHD than in those who do not have the disorder, a new study has found.

Head-hits are known to increase the risk of mental health issues and neurological disorders, including CTE which causes dementia and suicidal thoughts.

But a new study on college athletes by the University of South Carolina warns that this risk is heightened in athletes diagnosed with attention deficit hyperactivity disorder, which is incredibly common in sports.

Lead author Dr Robert Davis Moore warns the findings show a desperate need for more comprehensive mental health screening post-concussion, since the current standard assessment only involves one question (‘do you feel depressed?’), and most athletes answer ‘no’ regardless of their mental health status. 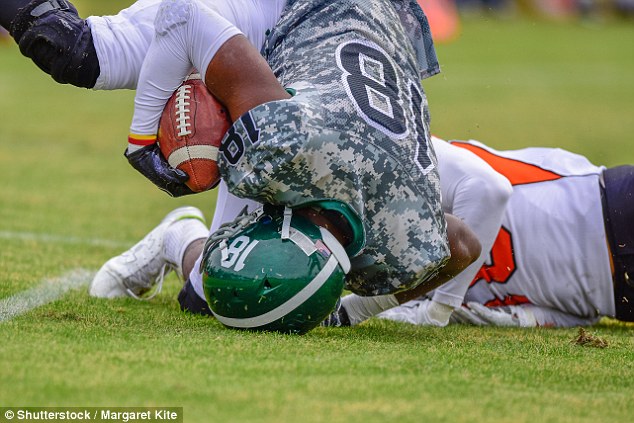 ‘Mental health issues are very serious among athletes, particularly college athletes who are working out all the time, competing, and going to school,’ Dr Moore told DailyMail.com.

‘We know that ADHD not only predisposes athletes towards injuries but also multiple injuries, and that it takes them longer to heal. We wanted to look at how this affects mental health.’

The rate of ADHD diagnoses has soared in the US population in recent years. A CDC report released in February found 6.1 million children (9.8 percent) had been diagnosed with the disorder – an increase of about five percent a year since 2003. Most of them (around 5.4 million) still struggle with symptoms.

There are no conclusive figures on the rate of ADHD among athletes, but the condition is widely discussed in sports. Olympic swimmer Michael Phelps, NFL’s Andre Brown, and Michael Jordan – among others – have shared their battles with the condition.

Studies have shown a reciprocal relationship between the two, particularly in men’s sports. ADHD is three times more common in males than it is in females. Exercise helps to bring symptoms of impulsion, aggression and hyperactivity under control. Whether for that reason or otherwise, one recent study showed people with ADHD are drawn to sports.

‘While some sports activities require intense concentration, however, that’s not the case with every sport,’ Dr Leah Lagos, a New York sports psychologist who was not involved in the new study, told DailyMail.com.

‘In many sport disciplines, performance happens instantaneously and with powerful bursts. So, it makes sense that individuals with ADHD can thrive in specific sports positions and disciplines, as well.’

In recent years, pressure on professional leagues to deal with the specific risks facing ADHD-affected athletes has intensified. The spike in diagnoses appeared to correlate with a spike in athletes being suspended for taking performance-enhancing drugs (Adderall, commonly prescribed to control ADHD symptoms, falls into that bracket). Research has also shown a link between traumatic brain injury and ADHD in athletes, suggesting repeated head hits could cause delayed onset of the disorder.

However, Dr Moore says this conversation has neglected to address mental health.

‘I am passionate about expanding all injury assessment to include mental health assessment,’ he said.

‘Currently, the recommended concussion evaluation only asks one question about depression and anxiety. Normally all athletes say “no”. Then, when you give them an actual evaluation, you find some of them do have anxiety or depression.’

To investigate the links between ADHD and mental health conditions, Dr Moore’s team studied 979 NCAA Division I college athletes at the University of South Carolina.

Using medical records and questionnaires from the start of the season, they established which athletes had ADHD, a history of concussion, anxiety, depression, or a combination of all or any of them.

They then surveyed the athletes again, screening them for depression and anxiety, at least six months after any concussions.

At the outset, Dr Moore said, he expected to see an increased risk of depression and anxiety in all three of the affected groups. That wasn’t the case – concussion alone, and ADHD alone, did not have a statistically significant impact on their mental health risks. A combination of the two, however, did.

The athletes with both ADHD and concussion had much higher scores on the tests for anxiety and depression than any of the other groups.

The fact that these differences were evident more than half a year after any injury is enough of an indication of the clear correlation, Dr Moore said.

The study deliberately excluded any athletes taking medication, but Dr Moore’s next study, already under way, will be looking specifically at the mental health impact of injuries on medicated athletes versus their non-medicated peers.

‘Among athletes, but particularly among students, there is ubiquitous use of medications such as Adderall and other amphetamines to improve their performance, so it’s something we need to understand,’ Dr Moore said.

For now, he hopes the findings will spur on sports leagues – both amateur and professional – to implement more comprehensive mental health screening.

He urges parents not to panic about the findings. ‘Don’t be afraid,’ he insists, ‘just be aware and make sure that your child gets the right evaluations, and to repeat these evaluations over time, because lots of these differences re-emerge months later.’