Doctors are being told to resist patients who try to stock up on prescription medicines in fear of running out after Brexit.

The Department of Health and Social Care (DHSC) has warned GPs that they should not over-prescribe in the lead up to March 29.

Medics have reported feeling pressured by worried patients who believe they will be left short of vital medication if there is no Brexit deal.

Experts suspect Brexit has ‘exacerbated’ usual medicine shortages and the Government has this week admitted there could be six months of disruption if transport routes are disrupted next month. 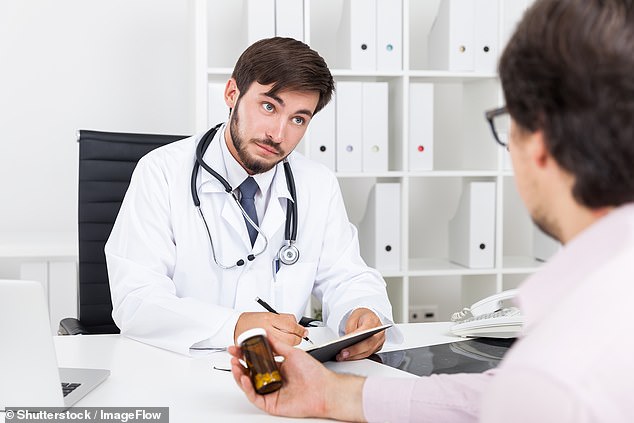 The DHSC has insisted there will be a big enough supply of drugs thanks to contingency plans – but warned that GPs need to play by the rules.

A spokesperson told the BMJ: ‘We are confident that, if everyone does what they should do, the supply of medicines should be uninterrupted in the event of a no-deal EU exit.

‘Patients should not stockpile medicines, and GPs do not need to write longer NHS prescriptions.

‘We are working closely with pharmaceutical companies to ensure patients can continue to access the medicines they need, including asking many of them to ensure a minimum of six weeks’ additional supply of medicine over and above usual buffer stocks by 29 March.’

However, the British Medical Association revealed GPs are facing patients who believe a possible no-deal situation could affect their health.

People who rely on daily medication for conditions such as diabetes, blood pressure, heart problems or cancer are of particular concern, the organisation said.

Patients are reportedly asking doctors for longer repeat prescriptions so they can build up a stash of the medicine in case they can’t get it after March.

‘I CAN PROBABLY LAST ONE TO TWO WEEKS WITHOUT MY MEDICATION’

Patients with serious medical conditions have spoken of their fear that a no-deal Brexit would leave them without vital medication.

Writer Jennie Kermode, 45, from Paisley, has mixed connective tissue disease with elements of lupus, scleroderma and polymyositis – a condition that means her immune system attacks her skin, muscles and kidneys.

She told the Press Association: ‘I’ve lost so much muscle that I can no longer walk, but I’m not now losing more at a significant rate, and my kidneys are stable.

‘This is thanks to a drug called tacrolimus which is manufactured in Turkey.

‘Unfortunately, due to production issues, tacrolimus is already in short supply in the UK so there’s no pre-Brexit NHS stockpile.

‘If I can’t get it, there’s a chance that I’ll be able to successfully transfer to another immunosuppressant, if that’s available, but doing so will be risky and all the others in existence will make me much more sick than the tacrolimus does.’ 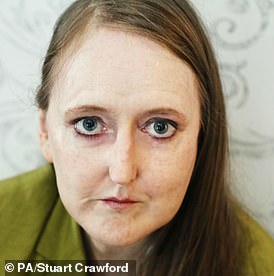 Jennie Kermode, from Paisley in Scotland, relies on medication made in Turkey which is already in short supply, and fears Brexit could make this worse. Ms Kermode said she could ‘probably last one to two weeks without my medication’

‘I can probably last one to two weeks without my medication before my kidneys fail,’ Ms Kermode said.

She added: ‘I’ve spoken to my consultant rheumatologist who said: “Don’t worry, somebody will think of something”.

‘I wasn’t very reassured by that. I’m not aware of anybody working on any remotely practical solution.’

Kieron Smith, 38, from Northumberland, takes medication to control his epilepsy.

He said he has spoken to his pharmacist ‘on a number of occasions’, but believes ‘the uncertainty is already tangible’.

‘Unfortunately they are as in the dark as the general public,’ he claimed.

‘Even they have no idea what the deal is, despite chasing for info themselves.’

He said the medication ‘allows me to live a normal, unrestricted life free from both grand mal and petit mal seizures’.

‘I have a full-time job and a young family and the ability to function without the shadow of epilepsy is critical in maintaining these things.

‘There are many more serious cases than mine I’m sure, but the difference in my life without the ability to fill my prescription would be profound, my work and family life would become untenable.’

Krishna Kasaraneni, executive member of the BMA’s General Practitioners Committee, said: ‘One example is thyroxine for three months rather than the standard one monthly supply, as they are worried about their health.

‘It’s a difficult conversation to have, as GPs have responsibility for individual patients as well as the collective needs of all their patients.’

The Department of Health revealed in January its stocks of 80 drugs were low, including blood pressure pills and anti-inflammatories.

Sandra Gidley, a former Liberal Democrat MP who is chair of the English Pharmacy Board of the Royal Pharmaceutical Society, told BBC Radio 4’s Today at the time: ‘This has been a problem for some time. It is fair to say that recently the shortages have been worse than ever.’

Global demand, a spike in the cost of ingredients and new regulations were suggested reasons for pharmacies struggling to get hold of certain medications.

Medical boards including the BMA and The National Pharmacy Assocation (NPA), the trade body for independent pharmacies, have expressed their concerns that Brexit was ‘exacerbating’ the shortages, according to the BMJ.

‘Brexit is bringing to a head a number of issues that should have been grappled with years ago,’ a spokesman for NPA said.

The DHSC maintains its stance that Brexit is not creating a shortage and instead it was ‘due to manufacturing or distribution issues’.

GPs should communicate with local pharmacies if they have concerns they are running out of medicine, as reserving medication could disrupt the wider supply, officials have said.

Rob Hendry, medical director at the Medical Protection Society, said: ‘Our main message to the GPs would be to follow the guidance to prescribe as normal. If some people did stockpile, that would reduce the supplies for others.

‘But it would be a good opportunity to engage with local pharmacies because should there be a problem, or should a patient complain, it would be useful if they could demonstrate steps they’ve taken to address that.’

Andrew Green, clinical and prescribing policy lead for the General Practitioners Committee, said it was tempting to help patients who were anxious about their medication.

‘However,’ he said, ‘even in normal times the supply chain does not have great reserves, and if early prescriptions are provided shortages will be created where none need exist’.

It was revealed by the health minister Stephen Hammond that transportation routes through Dover and Folkestone could be disrupted for up to six months, GP Online has reported, rather than the previous estimate of six weeks.

In a letter to the House of Lords EU affairs subcommittee he said: ‘The possible border delays indicated in the updated planning assumptions would impact any import of medicines, including prescription-only and pharmacy medicines, critical to the continuity of patient care.

‘It would also impact UK manufacturers of medicines that may rely on the import of raw materials from or via the EU. Therefore, we have asked all suppliers to consider their supply routes and whether any re-routing to avoid the short straits is necessary.’

The UK imports 73 per cent of its pharmaceutical products from the EU, reflecting 37million packs of medicines.

More than two million prescriptions are filled every day in England.