The coronavirus disease 2019 (COVID-19) pandemic continues to take a heavy toll on life and health and the economic development and prosperity of nations around the world. COVID-19, which is caused by infection with the severe acute respiratory syndrome coronavirus 2 (SARS-CoV-2), has spread rapidly and extensively, which has led to the emergence of new variants that show the ability to resist neutralization by antibodies elicited by earlier strains and current vaccines.

This phenomenon has led to rising rates of breakthrough infections among the vaccinated. Meanwhile, the proportion of unvaccinated people remains high, especially in developing countries. Therefore, these factors make it all the more necessary to evolve effective treatments against SARS-CoV-2.

In a new study published on the preprint server medRxiv*, researchers prevent evidence on the efficacy of neutralizing monoclonal antibodies (nmAb) in treating COVID-19. 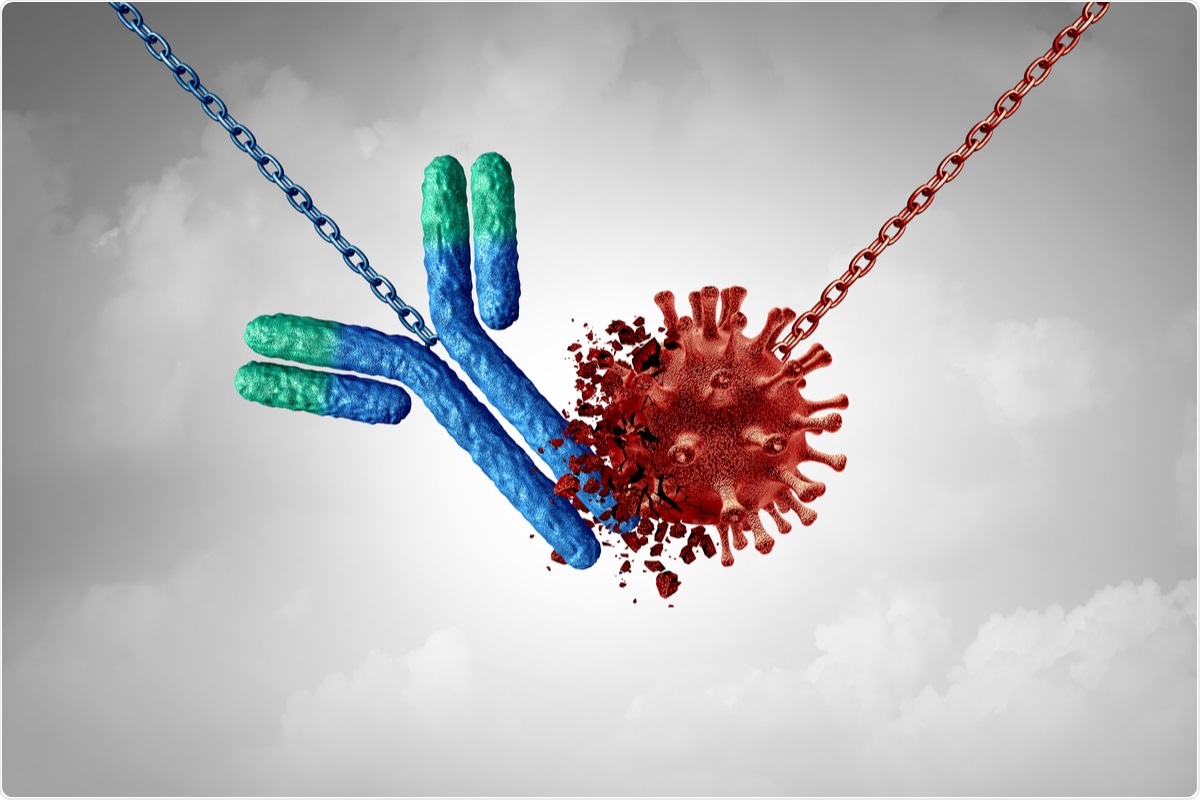 Several nmAbs are currently used to treat early symptomatic COVID-19 to prevent progression to severe disease. However, despite their widespread use, researchers are still unsure of the efficacy of nmAbs against the SARS-CoV-2 Delta variant, whether they work well in vaccinated patients, and whether they actually prevent mortality.

It has been challenging to answer these queries definitively due to the hesitance of patients to receive this treatment and because many physicians may deem it wrong to randomize patients to a placebo. As a result, most data on the efficacy of nmAbs has been obtained from observational data.

The current study aims to evaluate the effectiveness of nmAbs using a robust platform that makes use of real-world data. Carried out on a cohort of adult COVID-19 patients who were not hospitalized, the study utilized electronic health records available within a state-level healthcare system, in addition to state-wide vaccination and mortality records.

The study included over 9,500 infected patients, matching each patient who received nmAbs (n=2,675) to 2.5 non-nmAb patients (n=6,677). Over 40% of the study participants were 65 years of age or older, half were overweight or obese, and three-quarters had one or more underlying illnesses.

The results showed a lower rate of hospitalization from any cause at 4% among nmAb recipients as compared to 7.7% for non-treated patients, thereby implying that the odds of hospitalization were cut in half in those who were administered nmAbs. Deaths from any cause were also reduced by 90% in patients who received nmAb therapy. These differences were visible by 28 days and persisted until day 90.

By day 90, the risk of hospitalization was reduced by about 50%, with the odds of death reduced by over 80% in those treated with nmAbs. While treated patients visited the emergency department more often, fewer of these visits resulted in hospitalization. 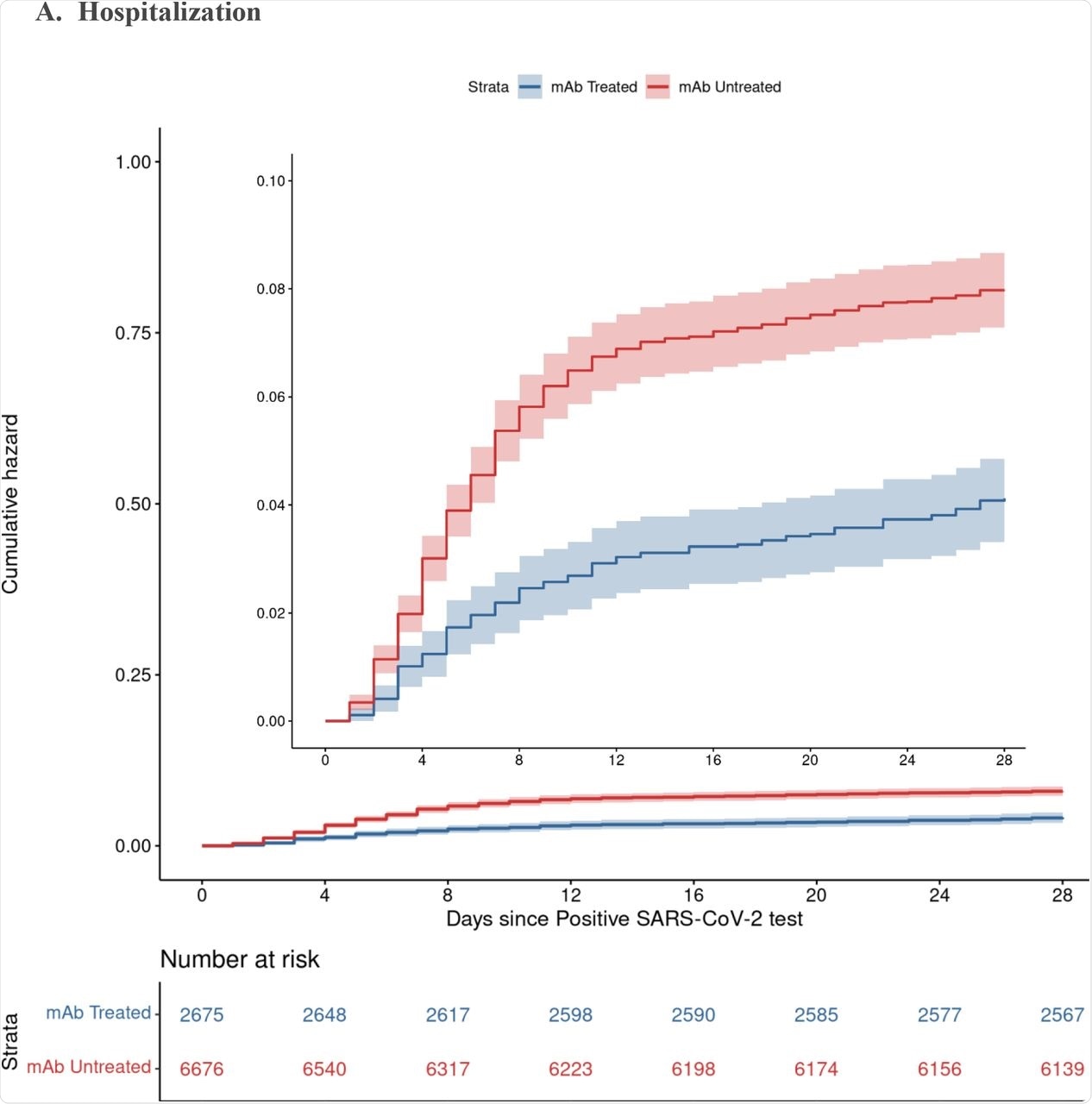 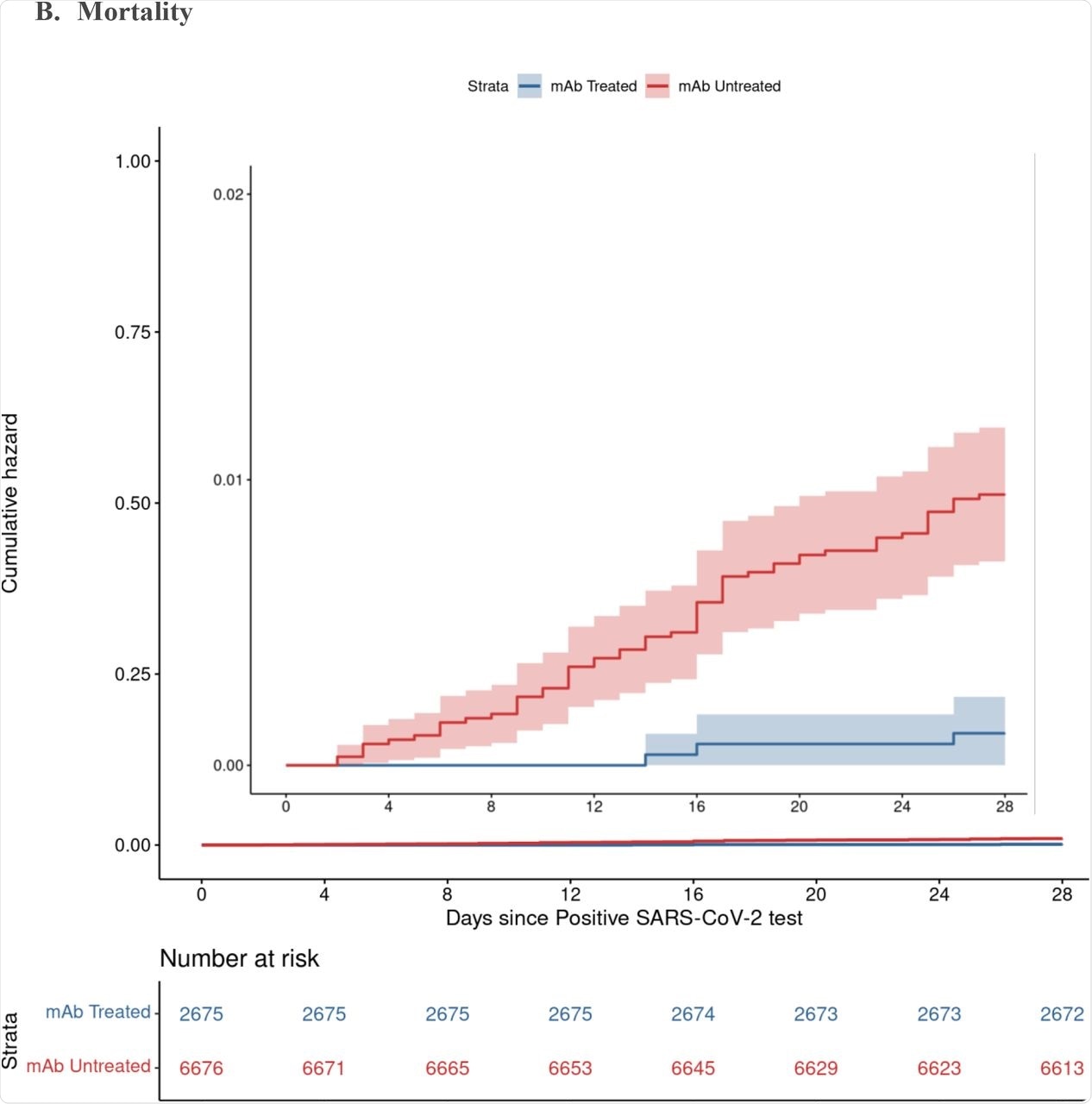 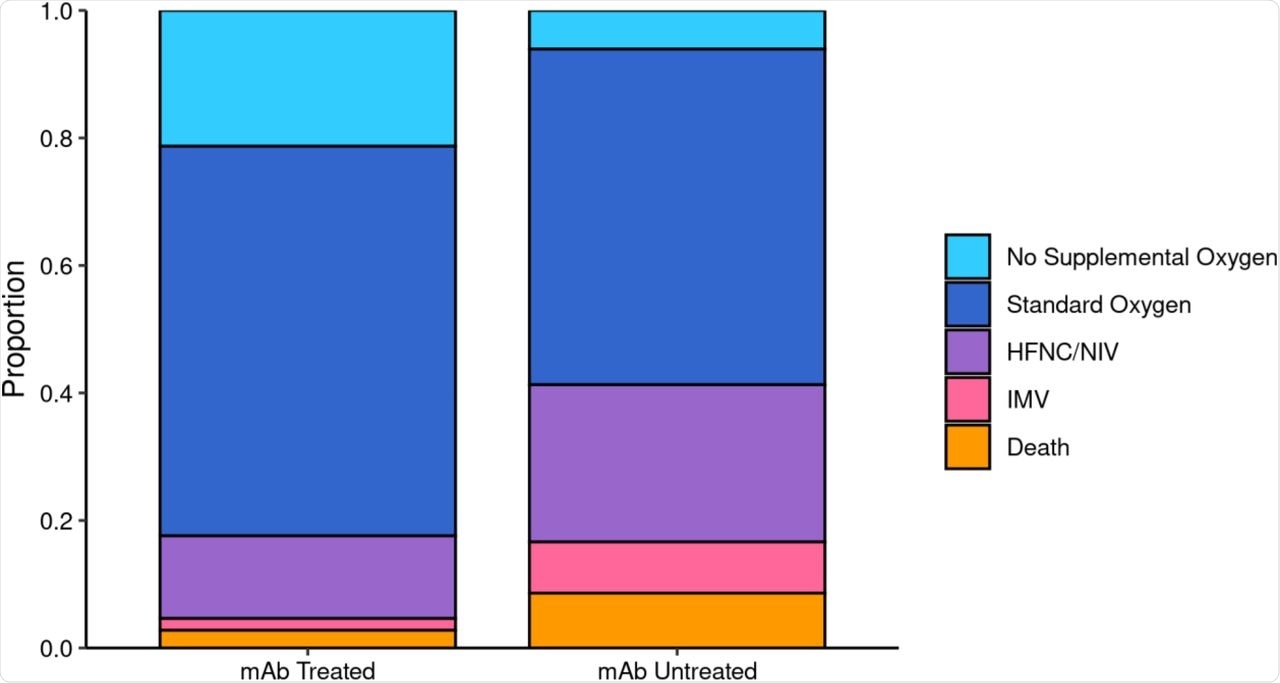 For ICU patients, the length of stay was less than 4 days as compared to over 8 days among the nmAb and non-treated group, respectively. The overall data show a less severe form of the disease in the treatment group.

The efficacy of nmAbs appears to persist during the Delta phase, with the risk of hospitalization being reduced by 65% in the treatment group as compared to a reduction of 35% with the Alpha variant. Both one and two doses of current messenger ribonucleic acid (mRNA) vaccines appeared to reduce hospitalizations to the same extent by about 55%.

None of the patients who had received two vaccine doses and nmAb treatment died.

The value of this study lies in the use of real-world data which demonstrates the major utility of nmAb therapy in reducing the rates of hospitalization during the period when the Delta variant was the dominant circulating strain of SARS-CoV-2. The use of these agents reduced 28-day mortality by 90%. Taken together, the current study successfully evaluated the effectiveness of this therapy against the Delta variant in terms of mortality reductions.

“Early outpatient treatment with mAbs should be prioritized, especially for individuals with highest risk for hospitalization…Our findings suggest the most efficient use of limited mAb infusion capacity to alleviate strain on hospitals is to preferentially administer mAbs to patients at highest baseline risk for hospitalization, including those who are older, not fully vaccinated, or with multiple comorbid conditions.”

Vaccination combined with nmAb treatment was associated with a less than 5% hospitalization rate. This was three-fold greater than the 2% rate with fully vaccinated nmAb recipients and was greater than that among the vaccinated but non-treated subgroup.

medRxiv publishes preliminary scientific reports that are not peer-reviewed and, therefore, should not be regarded as conclusive, guide clinical practice/health-related behavior, or treated as established information.

Dr. Liji Thomas is an OB-GYN, who graduated from the Government Medical College, University of Calicut, Kerala, in 2001. Liji practiced as a full-time consultant in obstetrics/gynecology in a private hospital for a few years following her graduation. She has counseled hundreds of patients facing issues from pregnancy-related problems and infertility, and has been in charge of over 2,000 deliveries, striving always to achieve a normal delivery rather than operative.