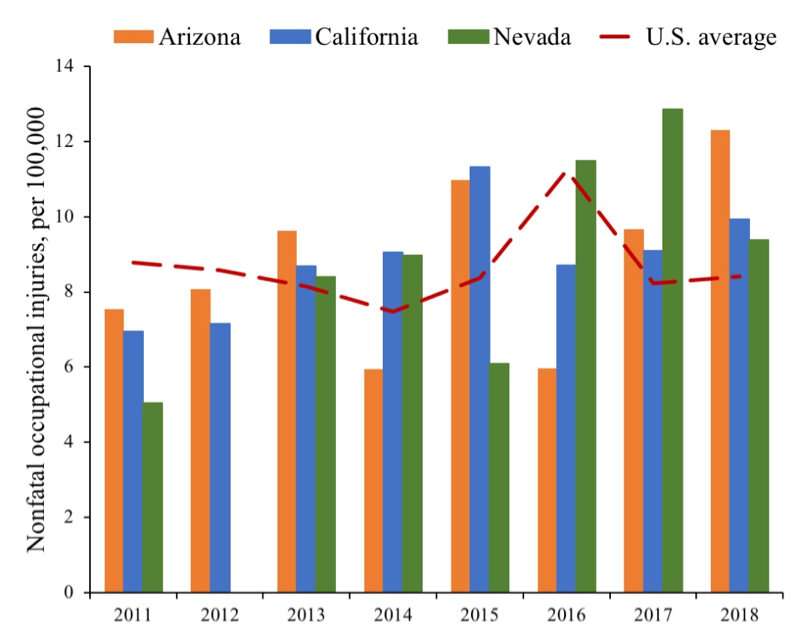 Working outdoors during periods of extreme heat can cause discomfort, heat stress, or heat illnesses—all growing concerns for people who live and work in Southwestern cities like Las Vegas, where summer temperatures creep higher each year. But, did you know that female outdoor workers are experiencing disproportionate impacts? Or, that more experienced outdoor workers are at higher risk than those with fewer years on the job?

In a new study in the International Journal of Environmental Science and Technology, scientists from DRI, Nevada State College, and the Guinn Center for Policy Priorities explore the growing threat that extreme heat poses to workforce health in three of the hottest cities in North America—Las Vegas, Los Angeles, and Phoenix. Their study results hold important findings for outdoor workers, their employers, and policymakers across the Southwestern U.S.

To assess the relationship between extreme heat and nonfatal workplace heat-related illness, the study compared data on occupational injuries and illnesses for the years 2011-2018 with heat index data from Las Vegas, Los Angeles, and Phoenix. Heat index data combines temperature and humidity as a measure of how people feel the heat.

“We expected to see a correlation between high temperatures and people getting sick—and we found that there was a very clear trend in most cases,” said lead author Erick Bandala, Ph.D., assistant research professor of environmental science at DRI. “Surprisingly, this type of analysis hadn’t been done in the past, and there are some really interesting social implications to what we learned.”

First, the research team analyzed changes in heat index data for the three cities. They found a significant increase in heat index at two of the three locations (Phoenix and Las Vegas) during the study period, with average heat index values for June-Aug climbing from “extreme caution” in 2012 into the “danger” range by 2018. Over the same period, data from the Bureau of Labor and Statistics showed that the number of nonfatal heat-related workplace injuries and illnesses in each of the three states increased steadily, climbing from below the national average in 2011 to above the national average in 2018. 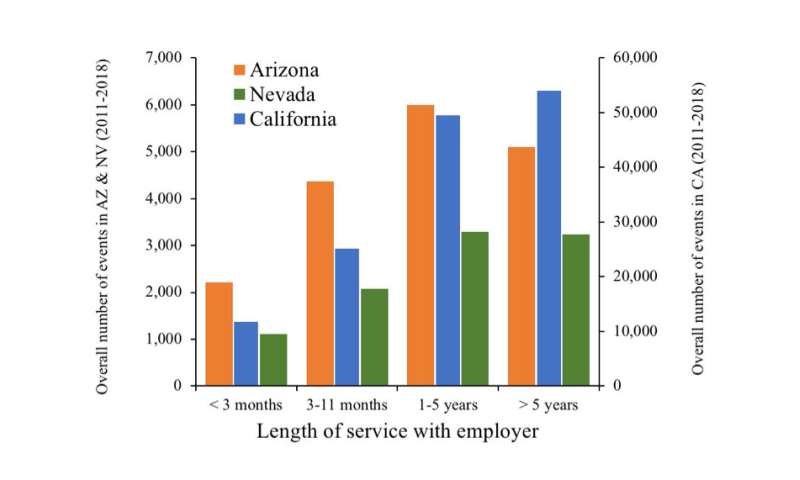 “Our data indicate that the increases in heat are happening alongside increases in the number of nonfatal occupational injuries across these three states,” Bandala said. “Every year we are seeing increased heat waves and higher temperatures, and all of the people who work outside in the streets or in gardens or agriculture are exposed to this.”

Study authors believe that the reason for this increase may be due to more women entering the outdoor workforce, or it could be related to the vulnerability of women to certain heat-related effects, like hyponatremia—a condition that develops when too much plain water is consumed under high heat conditions and sodium levels in blood get too low.

“As the number of female workers exposed to extreme temperatures increases, there is an increasing need to consider the effect of gender and use different approaches to recommend prevention measures as hormonal factors and cycles that can be exacerbated during exposure to extreme heat,” said study coauthor Kebret Kebede, M.D., associate professor of biology at Nevada State College.

The authors examined other variables, such as the length of an employee’s service with an employer. They found that the number of heat-related injury/illnesses tended to increase as the length of service with the employer increased, and that those with more than five years of service were at greater risk than those with less than one year of service. This may be due to employees with more years of service having a reduced perception of risk, or could be a cumulative effect of years of chronic heat exposure on the well-being of outdoor workers. 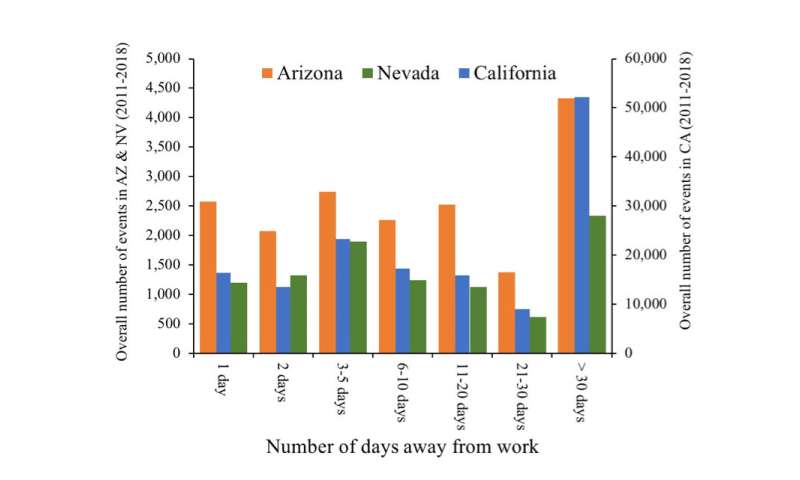 In severe cases, heat-related illness or injury can cause extensive damage to all tissues and organs, disrupting the central nervous system, blood-clotting mechanisms, and liver and kidney functions. In these cases, lengthy recoveries are required. The authors found concerning evidence that heat-related injuries are keeping many outdoor workers away from work for more than 30 days.

“These lengthy recovery times are a significant problem for workers and their families, many of whom are living day-to-day,” Bandala said. “When we have these extreme heat conditions coming every year and a lot of people working outside, we need to know what are the consequences of these problems, and we need the people to know about the risk so that they take proper precautions.”

The study also explored connections between heat-related injuries/illnesses and the number of hours worked, the time of day that the event occurred, and the ethnicities and age groups that were most impacted.

“This study underscores the importance of and the need for the work the Nevada Occupational Safety and Health Administration (OSHA) is doing to adopt a regulation to address heat illness,” stated Nancy Brune, Ph.D., study co-author and senior fellow at the Guinn Center.