Good cholesterol may increase the risk of heart disease in women after menopause, according to new research.

Hormonal changes during menopause can cause the ‘healthy’ HDL blood fat to become harmful – by enlarging the particles, say scientists at the University of Pittsburgh.

This increases the risk of blood clots due to hardening of the arteries – which can trigger heart attacks or strokes.

The finding adds to growing evidence that women’s heart disease rates rise dramatically after the menopause because even good cholesterol becomes bad. 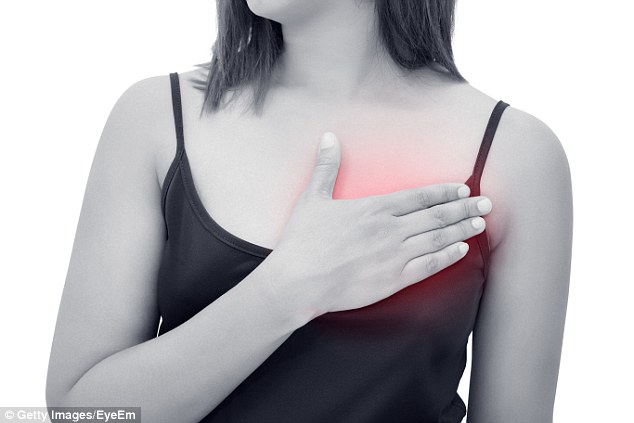 But the Pittsburgh team says postmenopausal factors have an impact on its heart-protective qualities – because it is made up of tiny particles that vary in size and contents.

Cholesterol tests only measure total levels of ‘good’ cholesterol that doctors use to prescribe drugs such as statins or recommend diet and changes to exercise to help boost levels.

Lead author Professor Samar El Khoudary, of the University of Pittsburgh, said this may have to change – at least for postmenopausal women.

Her team found calculating good cholesterol levels is not enough because the quality is as important as the quantity.

How much a middle aged or elderly woman has does not necessarily reflect its overall concentration, uneven distribution or make up and function.

Women are subject to a variety of physiological changes in their sex hormones, lipids, body fat deposition and vascular health as they transition through menopause.

The researchers say the decrease in estrogen, a sex hormone that boosts the heart, along with other metabolic changes may trigger chronic inflammation over time – altering the quality of HDL particles.

Epidemiologist Prof El Khoudary said: ‘The results of our study are particularly interesting to both the public and clinicians because total HDL cholesterol is still used to predict cardiovascular disease risk.

‘This study confirms our previous work on a different group of women and suggests clinicians need to take a closer look at the type of HDL in middle aged and older women, because higher HDL cholesterol may not always be as protective in postmenopausal women as we once thought.

‘High total HDL cholesterol in postmenopausal women could mask a significant heart disease risk that we still need to understand.’

Her latest analysis focused on 1,138 women across the US aged 45 to 84 enrolled in the Multi-Ethnic Study of Atherosclerosis (MESA) that began in 1999 and is still following participants today.

It found the traditional measure of good cholesterol fails to portray an accurate picture of heart disease risk.

The study published in Arteriosclerosis, Thrombosis, and Vascular Biology observed two specific measurements of HDL to show it is not always protective – or not as ‘good’ as expected.

This included the number and size of the HDL particles and total cholesterol they carried.

Large ones were linked to an increased risk of cardiovascular disease around the time the women went through their menopause.

During this period, the quality of HDL may be reduced, increasing the chance for women to develop hardening of the arteries, known as atherosclerosis, or cardiovascular disease.

As women get older, the quality of the HDL may restore – making the good cholesterol cardio-protective once again, said the researchers.

Women who went through the menopause later than usual and had high levels of good cholesterol were also more likely to develop atherosclerosis ten years or more later.

On the other hand, a higher concentration of total HDL particles was associated with lower risk.

Additionally, having a high number of small HDL particles was found beneficial for postmenopausal women – irrespective of age and how long it had been since they went through it.

Prof El Khoudary said: ‘We have been seeing an unexpected relationship between HDL cholesterol and postmenopausal women in previous studies, but have never deeply explored it.’

Previous research has demonstrated the heart-protective effects of good cholesterol. It carries fats away from the heart, reducing the build-up of plaque and lowering the potential for cardiovascular disease.