Gymnast, 14, CHOSE to have her foot removed and refitted backwards after developing bone cancer: Aspiring athlete turned down a prosthetic leg to carry on with the sport she loves

A teenage gymnast who developed an orange-sized tumour above her right knee chose to have the lower part of her leg removed and refitted backwards at her hip so she could continue to perform the sport she loves.

Emma Neagu, now 14, from Toronto, was diagnosed with a form of bone cancer known as osteosarcoma in 2016.

The teen endured nine months of grueling chemotherapy, which caused her to suffer nausea, mouth sores, headaches and hair loss.

After overcoming her treatment, Emma opted to have the groundbreaking surgery, know as rotationplasty, which involves removing cancerous bone before rotating the lower leg 180 degrees and reattaching it at the hip.

This gives the appearance of a short leg with a foot on backwards and enables greater mobility than a metal implant due to the ankle acting as a knee joint.

Her mother Claudia, 41, a former teacher, said: ‘I said, “But they can save both legs. Why are you choosing to cut one off?”

‘She told me, “I don’t need two identical legs. I just want to be able to do what I love.”

Emma, who uses a prosthetic to get around, is speaking out to encourage other cancer sufferers to pursue their dreams, saying: ‘I want other people to know that, so long as you believe and put your mind to it, you can achieve anything you want.’ 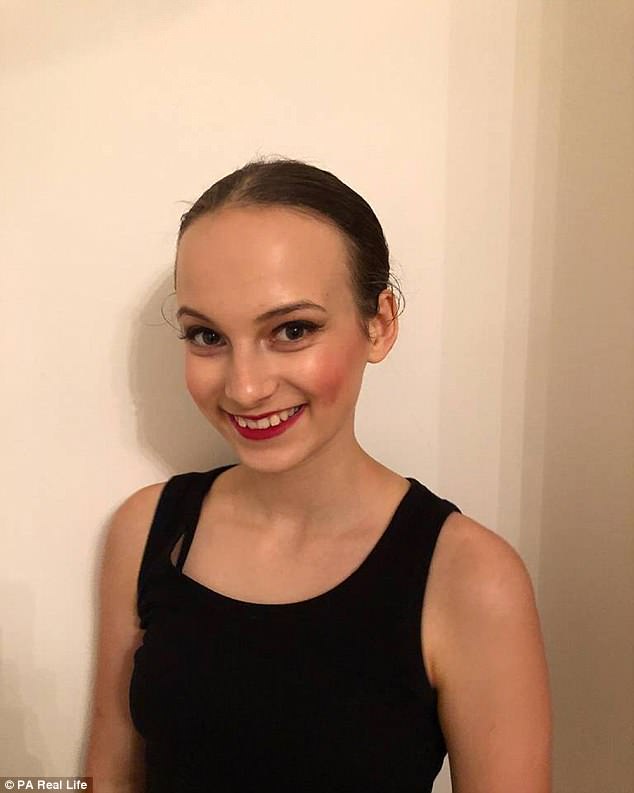 After developing an orange-sized tumour above her right knee, Emma Neagu chose to have the lower part of her leg removed and refitted backwards at her hip so she could do gymnastics 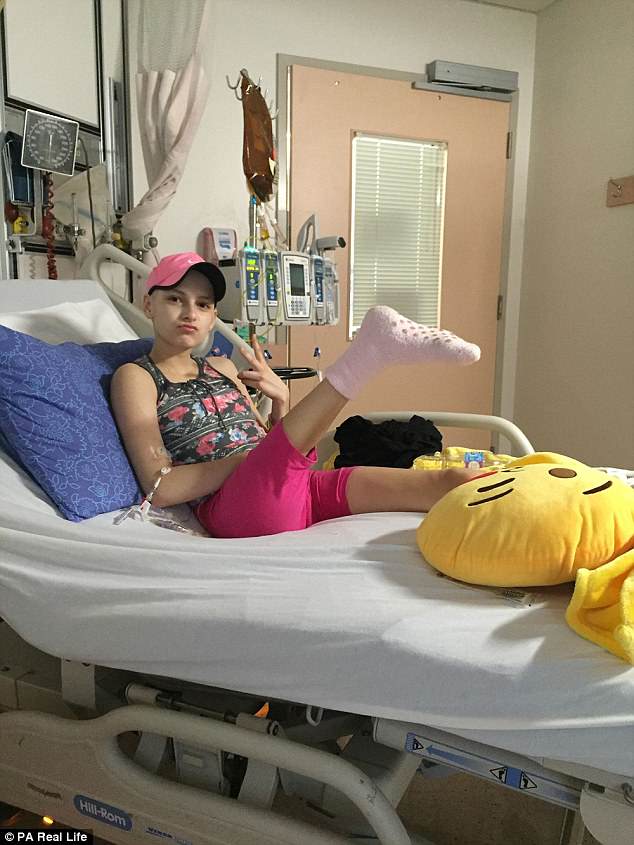 Emma (pictured after the surgery, known as retinoplasty) had her cancerous bone removed. Her lower leg was rotated 180 degrees and reattached at her hip so her ankle acts as a knee 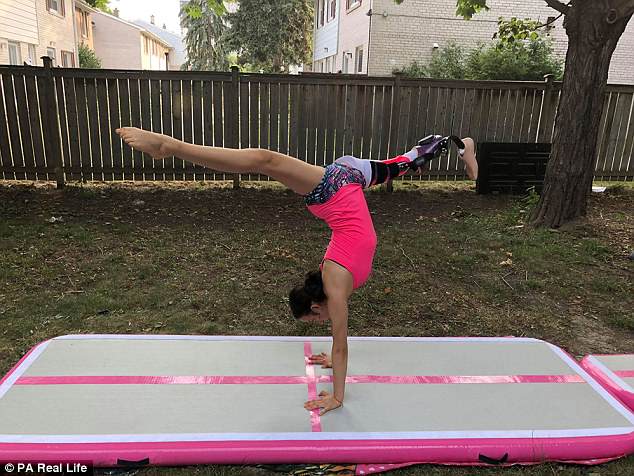 After recovering from the operation, Emma had a custom-made prosthetic fitted (pictured) which allows a greater range of movement for gymnastics than metal implants

Osteocarcoma is the most common type of bone cancer, usually diagnosed in teenagers and young adults.

It occurs when the cells that grow new bone form a cancerous tumor.

The cause of the cancer is unknown but it is thought to be related to rapid bone growth, such as adolescence.

If the cancer has not spread, the long-term survival rate is between 70 and 75 percent.

If osteosarcoma has already spread, such as to the lungs or other bones at diagnosis, the long-term survival rate is about 30 percent.

There are a few treatment options for osteosarcoma.

Often administered before surgery, chemotherapy uses drugs that help shrink and kill cancerous cells. The length of treatment varies and may depend on whether the cancer has spread to other parts of the body.

In most cases, surgeons can save the cancerous limb. The tumor and surrounding bone are removed and the missing bone is replaced with an artificial one.

A rotationplasty is where the bottom of the femur, the knee, and the upper tibia are surgically removed. The lower leg is then rotated 180 degrees and attached to the femur.

‘It meant my leg would still be functional’

Speaking of her decision to have the operation, Emma said: ‘It looked strange, but it meant my leg would still be very functional.

‘It involved amputating part of my leg, before reattaching the ankle to the femur backwards, to act as a new knee.

‘I was nervous, but I went into that operation knowing I’d made the best choice for me.

‘With the limb salvage surgery, my leg would look the same as before, as if nothing had happened, but I would have limited mobility. The rotationplasty definitely suited me better.’ 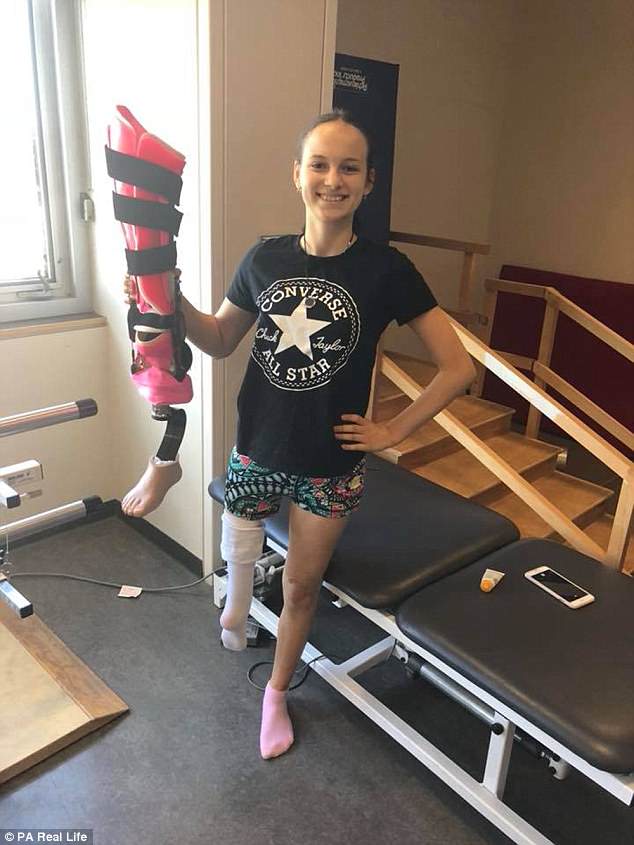 Day-to-day, and for gymnastics, Emma wears a prosthetic (pictured holding the artificial limb) 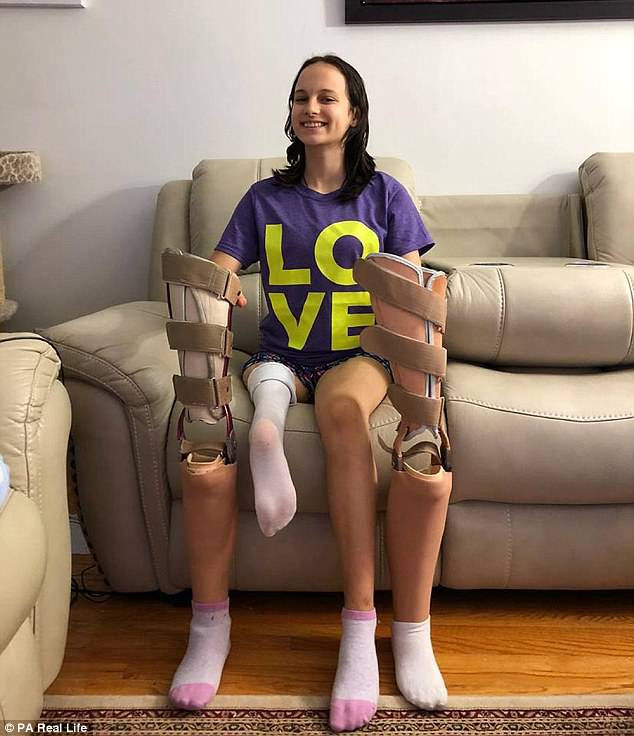 Emma has several copies of prosthetics, which she can bend due to her ankle acting as a knee 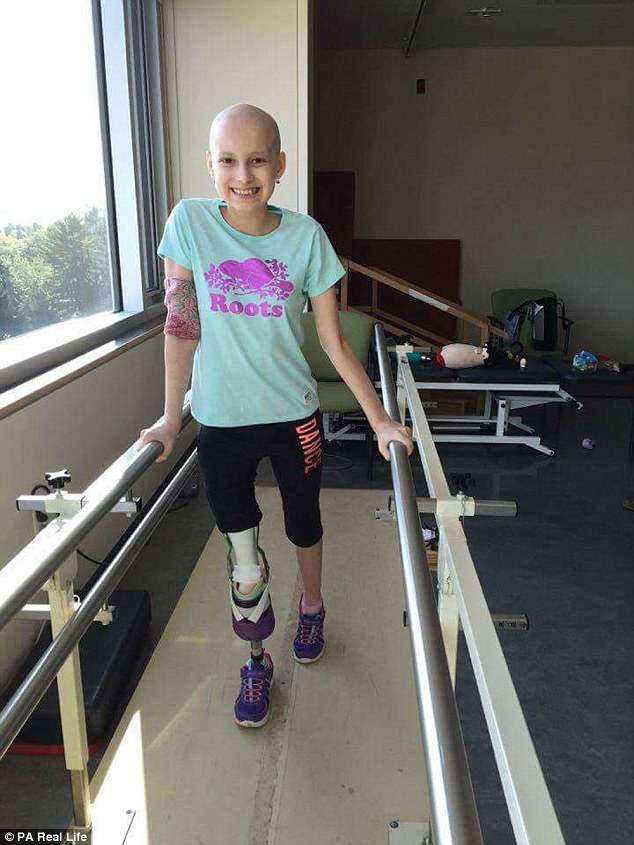 Emma started wearing the prosthetic while she was still undergoing chemotherapy. After lots of rest, the teenager started to perform gymnastics while wearing the limb over 18 months

Rotationplasty is a surgical procedure often offered to children with bone cancer around their knee joints.

The operation involves removing cancerous bone, as well as some healthy bone to ensure a ‘clear margin’.

The lower leg is then rotated 180 degrees and reattached.

This gives the appearance of a short leg with a foot on backwards.

The foot and ankle then function as a knee joint, which allows the patient to wear more functional below knee prosthetics.

Advantages include children being better able to perform sports and everyday activities.

Emma first experienced pain in her right knee in December 2015, which she put down to an injury from gymnastics or dance.

Yet later that month Emma fell and banged her knee while performing, leaving her in agony.

She said: ‘I’d fallen before and it’d only hurt for a second or two. But this was different.

‘It was so painful and swelled up so it looked all bumpy. I later found out I’d landed almost right where the tumour was.’

When the swelling failed to go down after two days, Emma visited a doctor, who put the pain down to a simple sports injury and encouraged her to continue peforming.

She said: ‘The word “cancer” literally never crossed my mind.’

Emma’s pain continued to get worse over the next month, prompting her doctor to perform a scan.

Receiving the results at Toronto’s Sickkids Hospital, the teenager was told she had osteosarcoma.

Emma said: ‘They didn’t outright use the word cancer, but my mum understood what they were saying and explained it to me.

‘They said to me it wasn’t an injury, or because of gymnastics, and it wasn’t my fault, nor had I done anything to cause it.

‘I was praying they were wrong, because before that, I’d been the healthiest kid.

‘It was very hard to hear I’d lose my long brown hair, too, and I was terrified what it’d mean for my gymnastics. I thought I’d never do a flip again.’ 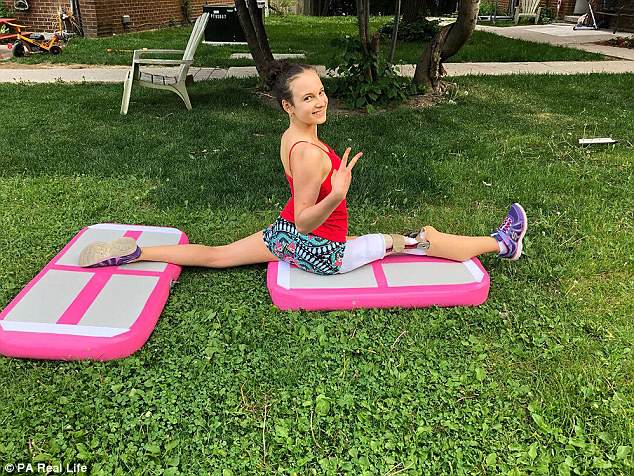 Emma’s backwards, shortened leg and bendable prosthetic means she can still do the splits 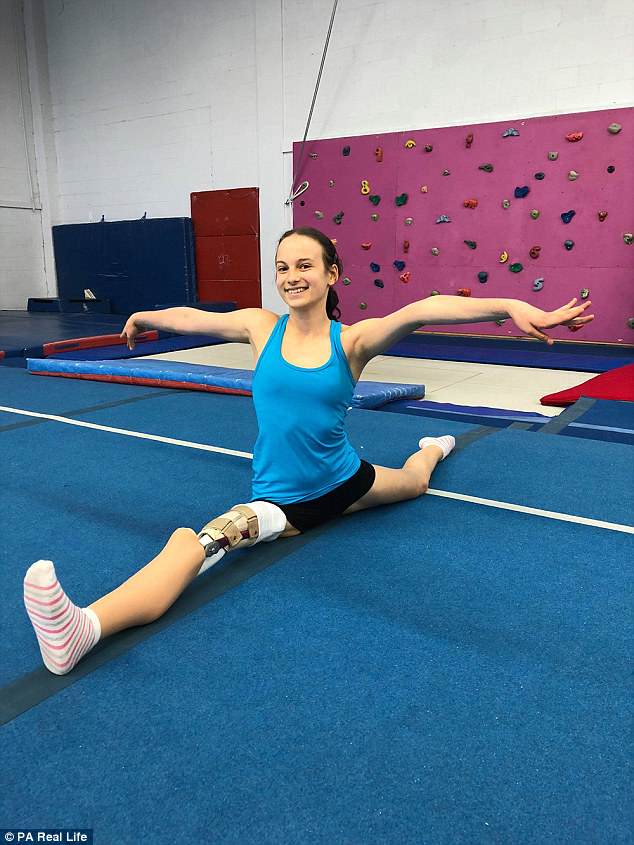 In March 2016, after further tests revealed the cancer had spread to her lungs, Emma began chemotherapy.

After also enduring surgery to remove cancerous spots from her lungs, Emma underwent the 12-hour rotationplasty operation, which took place at Sickkids.

Speaking of the procedure, Emma said: ‘I remember surgeons crowding around me, but they were being very gentle and kind. I was showing them how I wanted my leg to be when I came round.

‘Waking up, I knew what to expect and had accepted my new leg. It looked weird, but it was the right choice for me.’

Emma’s mum Claudia added: ‘I will never forget the doctor explaining the surgery choices and Emma opting for the rotationplasty.

‘I said, “But they can save both legs. Why are you choosing to cut one off?” As her mum, the idea scared me to think about.

‘But she told me, “I don’t need two identical legs. I just want to be able to do what I love.” The doctors were all very supportive of her choice, too.

‘Emma was so positive throughout her treatment. I’ve never seen anyone handle something that difficult like it. 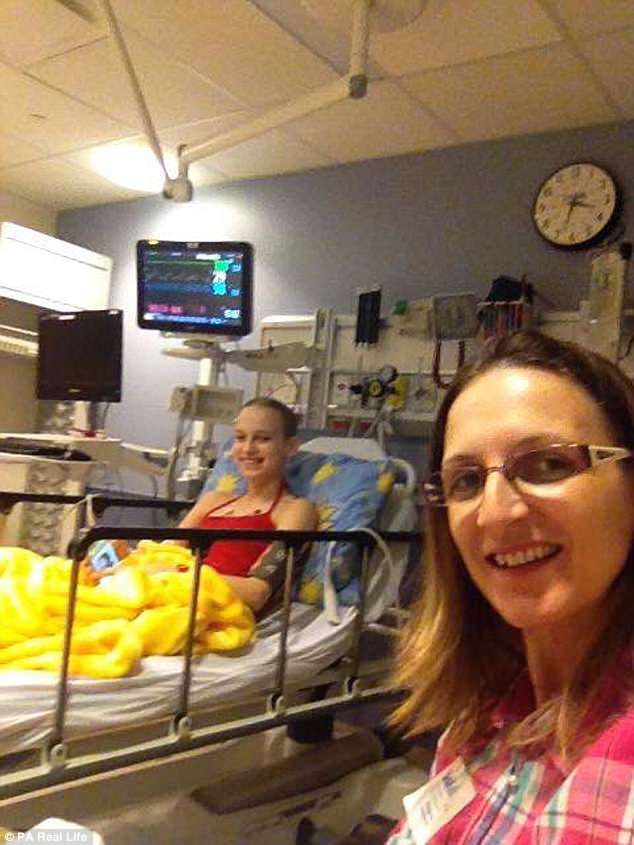 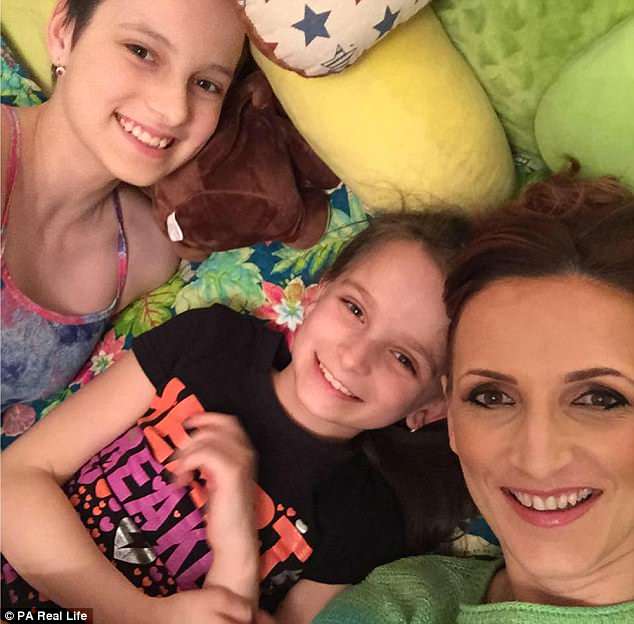 As well as her mother, Emma also had the support of her sister Elizabeth (pictured), eight

‘From the start, she was determined to fight’

After spending five nights in hospital, Emma was sent home, where she relied on a wheelchair to get around while she waited for her prosthetic leg to be fitted.

She said: ‘I couldn’t put any weight on it at first, so there was a lot of resting. It took a lot to get used to the fact part of my leg was backwards. Even pointing and flexing my toes was hard to wrap my mind around.’

After receiving her prosthetic in September 2016, Emma spent the next 18 months slowly reintroducing herself to gymnastics, with her chemotherapy ending in December 2016.

Although Emma was declared cancer free, she relapsed in December 2017 when a routine scan detected new spots on her lungs.

Following more surgery to remove a small part of the affected organ, Emma is in remission.

Claudia said: ‘The relapse was emotional, and she now has a lot of anxiety around scans, but her incredible mindset has got her through this.

‘From the start, she was determined to fight. And that’s what she has done.’