That hot lunch delivered to your door? Your health insurer might pick up the tab.

The cleaning crew that fixed up your apartment while you recovered from a stroke? The hospital staff helped set that up.

Health care is shifting in a fundamental way for millions of Americans. Some insurers are paying for rides to fitness centers and checking in with customers to help ward off loneliness. Hospital networks are hiring more workers to visit people at home and learn about their lives, not just their illnesses.

The health care system is becoming more focused on keeping patients healthy instead of waiting to treat them once they become sick or wind up in the hospital. This isn’t a new concept, but it’s growing. Insurers are expanding what they pay for to confront rising costs, realizing that a person’s health depends mostly on what happens outside a doctor’s visit.

“For many people, taking care of their blood pressure or their diabetes is not particularly high on their list when they don’t know where their next meal is coming from,” said Dr. Lori Tishler, vice president of medical affairs with the nonprofit insurer Commonwealth Care Alliance.

Some of this shift is driven by how health plans pay doctors and other care providers.

For decades, they’ve reimbursed mainly for each procedure or service performed, which limits the type of help a doctor can provide. But insurers are shifting more to reimbursement that centers on the patient’s health. That often involves paying providers to coordinate all the help a patient needs to improve their health—and lower health care costs.

“You get a lot more attention to the sickest population,” said Dr. Sam Ho, chief medical officer for UnitedHealthcare, the nation’s largest insurer.

Beyond payment changes, insurers and care providers also are stretching their approach to helping patients, especially those with low incomes or chronic conditions.

Virta Woodard receives weekly calls from her care manager, Armando Contreras, and she gets rides to a fitness center, all covered under a program called “Togetherness” started last year by the insurer Anthem. The 56-year-old, who has diabetes and lives with chronic pain, has lost 34 pounds since joining the program.

“I don’t cry every day like I used to because I don’t want to be telling Armando that,” the Long Beach, California, resident said. “I want to tell him I did something good.”

The thinking behind this program is that people who are more engaged socially will become more involved keeping up their health, Anthem spokeswoman Jill Becher said. 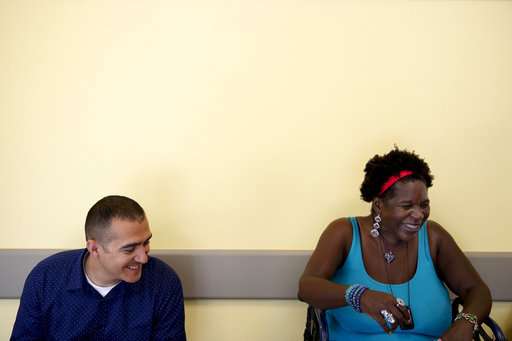 “It gave me a little bit of hope that I can get through this,” Romano said.

The Affordable Care Act expanded coverage to millions of people and increased recognition through the health care system that “just giving someone coverage is not going to be enough to ultimately improve health outcomes,” said Samantha Artiga, a Kaiser Family Foundation researcher.

Only about 20 percent of the adjustable factors that determine a person’s health come from care or access to it, according to a 2016 study in the American Journal of Preventive Medicine. Other factors—where a person lives, their income and their diet—combine to play a bigger role.

Delivered meals tailored to a person’s medical condition can help keep patients out of the hospital, according to David Waters, CEO of Boston-based Community Servings, which provides food to people with serious or chronic illnesses. He said patients who are sick, don’t speak English or have little money to buy fresh food often struggle to follow doctor orders on diets.

Four years ago, no insurers covered meals prepared by Community Servings. They now cover about 20 percent, and Waters expects that to rise to around 50 percent over the next several years.

Commonwealth Care Alliance pays for the delivery of meals low in both potassium and salt to Sister Jeanne Hubert, an 88-year-old nun who must watch her diet after heart valve surgery. For a recent midday meal, that meant roast beef and rice with a side of carrots.

“I think it’s wonderful,” Hubert said. “I never heard of that much help from an insurance company.”

Doctors also like the extra help. Dr. Michael Munger’s practice in Overland Park, Kansas, gets additional revenue to manage care for many of his patients. That allows them to check in to see if anyone is having problems filling prescriptions or making appointments.

The president of the American Academy of Family Physicians said: “It’s really allowed us to expand the care team and not think just about ‘Who’s next on my schedule?'”

The concept works, Munger said, as long as care is coordinated and the doctor remains in charge.

Success also depends on the patient being willing to accept help and on insurers waiting for the payoff. Near-term expenses from primary care visits or food services may rise, but the payoff—preventing a heart attack because of improved health—might be down the road.

Despite those challenges, health care researchers expect this trend to continue.

The U.S. health care system must be redesigned to get away from the idea that more health care equals better health, said Dr. Sanne Magnan, a senior fellow at the think tank HealthPartners Institute.