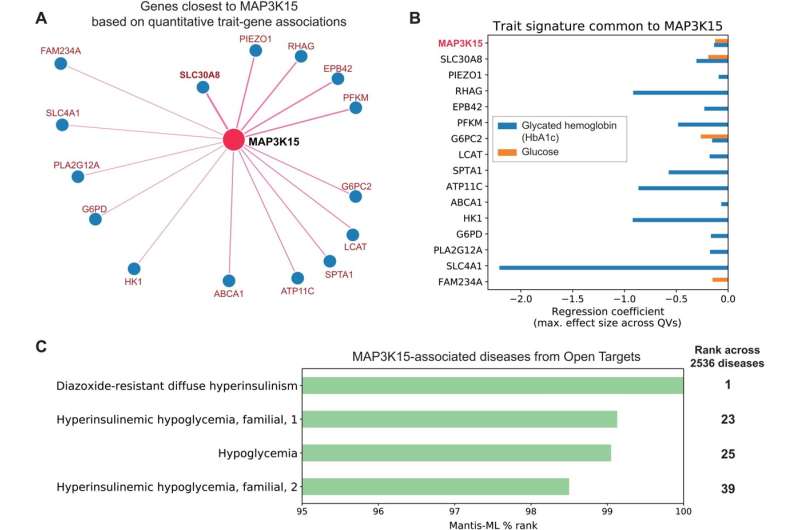 A team of researchers at AstraZeneca, working with colleagues from the University of Mexico and the University of Oxford, has found that a protein tied to the MAP3K15 gene variant may represent a potential target for managing both type I and type II diabetes. The paper is published in the journal Science Advances.

Both types of diabetes have been shown to give rise to multiple health problems, such as heart disease, kidney failure and blindness. And while there is no cure for the disease, many therapies have been developed to prevent some of the damage it can cause.

In this new effort, the researchers looked for commonalities in the genomes of people who have diabetes, as a means for developing new therapies. To that end, they ran search algorithms on data held in the U.K. Biobank.

In all, they found relevant data on 412,000 individuals who had various levels of the disease with a pattern of sorts: higher levels of proteins associated with the MAP3K15 variant. They found that recessive carriers of the variant were 30% less likely to develop diabetes and/or some of the complications that result from the increase in glycosylated hemoglobin levels that are typically seen with the disease.

The researchers suggest that a therapy targeting such proteins could prove useful both in preventing the onset of diabetes and in reducing the harm it causes in those who are afflicted.

The researchers ran the same study using data from the Admixed Americans database used in the Mexico City Prospective Study and also from the FinnGen database. They found similar results, though they also found a link between individuals with the SLC16A11 gene.

The finding, they noted, suggested that treatments developed to target MAP3K15 could be less effective in people with the SLC16A11 variant. They also found that individuals with the MAP3K15 variant who also had the Arg1122 variant were more prevalent in people living in Finland, the country with the highest rate of type 1 diabetes.

The researchers then looked to see if there might be a link between the MAP3K15 variant and a propensity for obesity or elevated cholesterol levels and found none.