A woman traumatised by giving birth in a hospital has devoted her life to helping women give birth at home and reuse their placentas in smoothies and pills.

Jenny Wren, 27, drank her own placenta in a blackberry and pear smoothie and now turns other women’s into pills or liquid medicines which she says are healing.

After training as a non-medical birth helper called a doula, Ms Wren has begun assisting women who don’t want to have their baby in a hospital.

She also produces care packages for new mothers which include placenta capsules and their dried out umbilical cord, which can be shaped into a heart.

Ms Wren, a mother-of-two from Cardiff, says women who eat or drink their placenta report improvements in their mood, energy and milk supply. 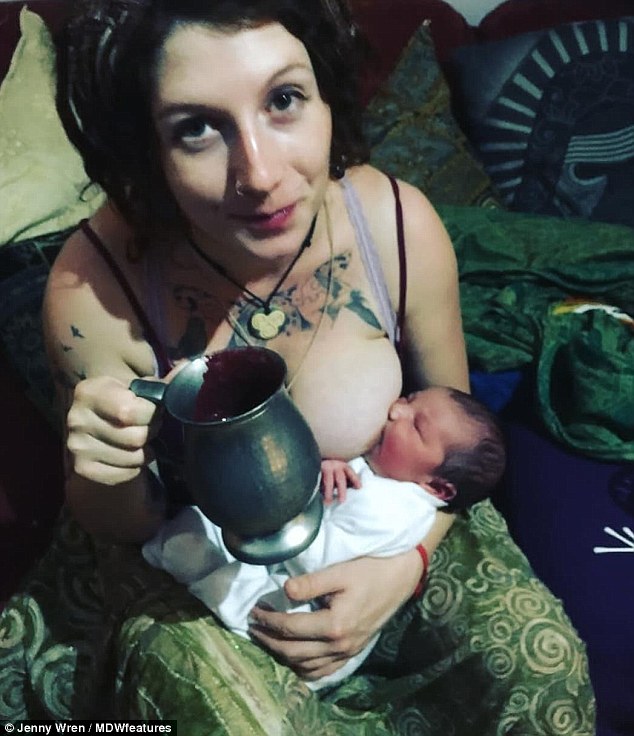 Ms Wren, pictured breastfeeding her daughter Autumn-Violet while drinking her placenta in a smoothie, said: ‘It seems such a waste to dispose of an organ with so many wonderful uses’

The placenta is an organ which develops inside the womb of a pregnant woman and connects the mother and baby’s blood supplies.

Oxygen and nutrients pass from the mother’s placenta to the baby via the umbilical cord, and both the placenta and cord come out when the child is born.

Ms Wren claims eating or drinking the organ – which is reportedly tasteless – gives ‘continuity’ for the mother.

She said: ‘You can make smoothies, have capsules, a tincture, an essence or a homeopathic remedy. Some specialists also make oils and cosmetics.

‘A placenta doesn’t taste of anything – I had a blackberry and pear smoothie from mine, which was delicious. The capsules have an earthy smell but that’s all.

‘After my daughter, I had a few smoothies and encapsulated the rest of it. 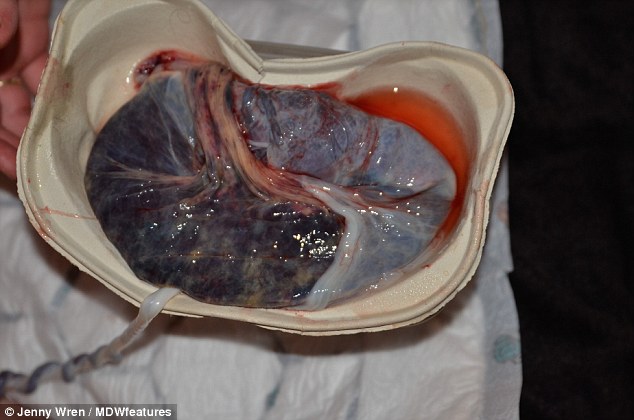 Ms Wren now prepares other women’s placentas for them to swallow in capsules or drink, after first drinking her own (pictured) in a smoothie – she says women report improved mood and better milk supply afterwards 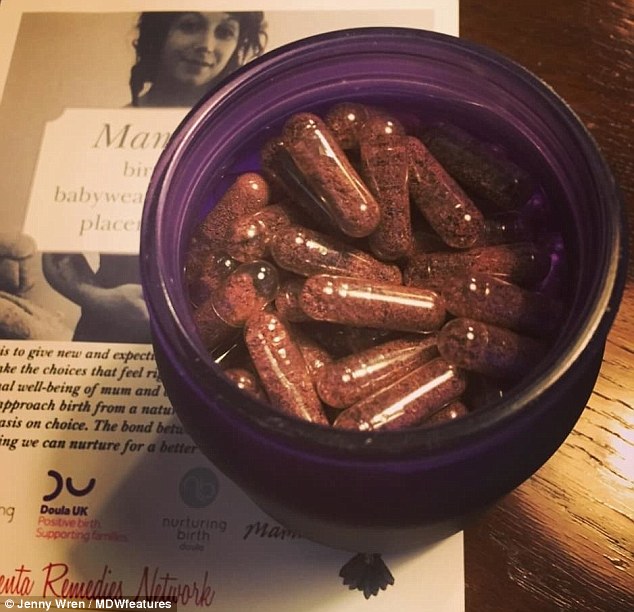 ‘Many celebrities are choosing to have placenta encapsulation done now.

‘For me it’s about providing that continuity for the mother. It’s the organ that nourished your baby and it can then be used to heal you post-natally.

Scientists say there are no benefits to new mothers eating their placentas, and it could actually do harm.

Consuming the placenta has become increasingly popular among new mothers because of claimed benefits such as a lower risk of getting postpartum depression, and increased mood and energy levels.

Health experts led by an obstetrician from New York-Presbyterian/Weill Cornell Medical Center in New York City last year said the risks of eating a placenta could outweigh any potential benefits.

They analysed dozens of studies about placenta consumption and now advise obstetricians to discourage their patients from eating the placenta in any form, according to the study published in the American Journal of Obstetrics and Gynecology.

‘As obstetricians, it’s important to tell the truth,’ said Dr Amos Grunebaum, lead author and obstetrician. ‘And the truth is it’s potentially harmful and no evidence it’s beneficial, so therefore, don’t do it.’

‘Over the last few years, we’ve had an increasing demand from patients who wanted to take their placenta home after delivery in order to eat it.’

The experts feared eating the organ could spread bacterial or viral infections.

‘It’s very much an exchange of energy to me and I feel when I am working with a placenta that I am doing something magical.

‘Mothers tell us that they feel an improvement in mood, energy and milk supply.’

Ms Wren learned how to prepare the organ by training as a placenta specialist a year ago, and is now a member of the Placenta Remedies Network.

She allows her clients to choose what they want to do with the placenta after their baby is born.

‘Women make contact with me when they are pregnant, and I provide them with a cool bag, a box and ice packs,’ Ms Wren said.

‘After the baby is born they put the placenta on ice and I collect it from them fairly quickly.

‘It usually takes me 48 hours to then process a placenta.

‘Women want this – they tell us that it works. I will always believe women. It seems such a waste to dispose of an organ with so many wonderful uses.’

Ms Wren made the decision to become a doula – also known as a birth coach – after the birth of her son Judah, now four.

Judah was supposed to be born via a planned home birth, but there were no midwives available when Ms Wren went into labour so she had to go to hospital. 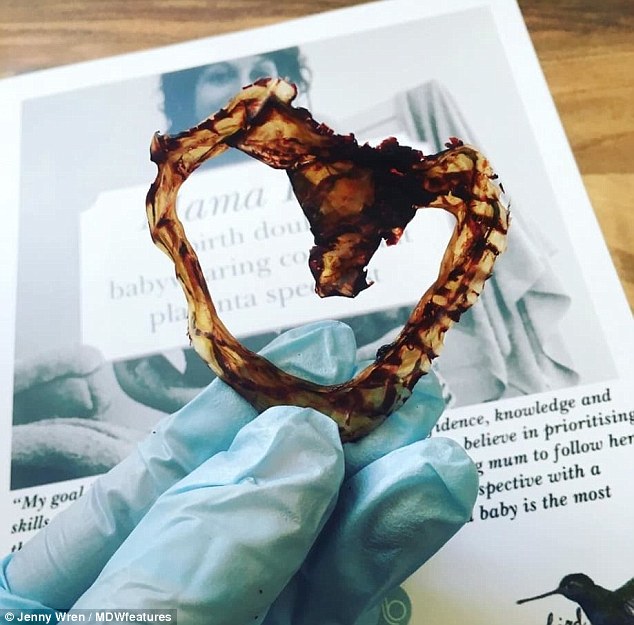 Ms Wren can model women’s dried out umbilical cords into the shape of a heart as a keepsake, as part of a care package she creates for her clients after they give birth

‘I was very disappointed, but I went in,’ she said.

‘He was born fairly easily in the water 16 hours later, but there were so many aspects of the birth that I was unhappy with.

‘I was told that I had to have internal examinations, they made jokes about my vagina during suturing and I couldn’t hold my son straight after the birth.

‘It was an overall positive experience, but I still felt that my autonomy had been taken away from me. 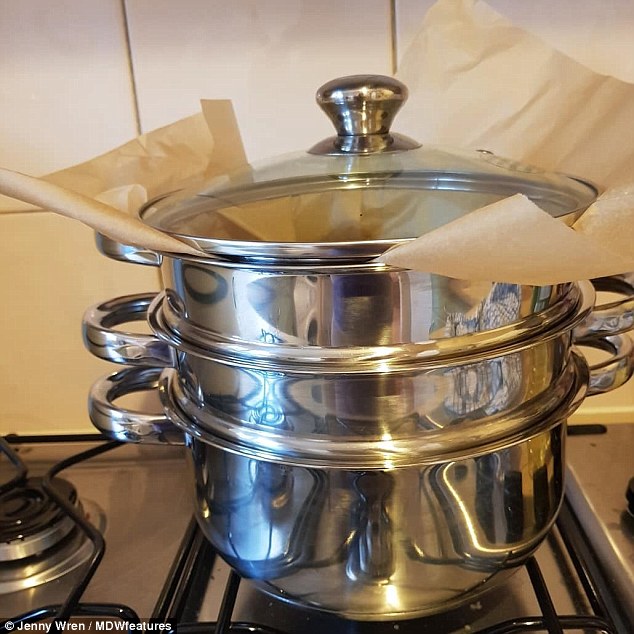 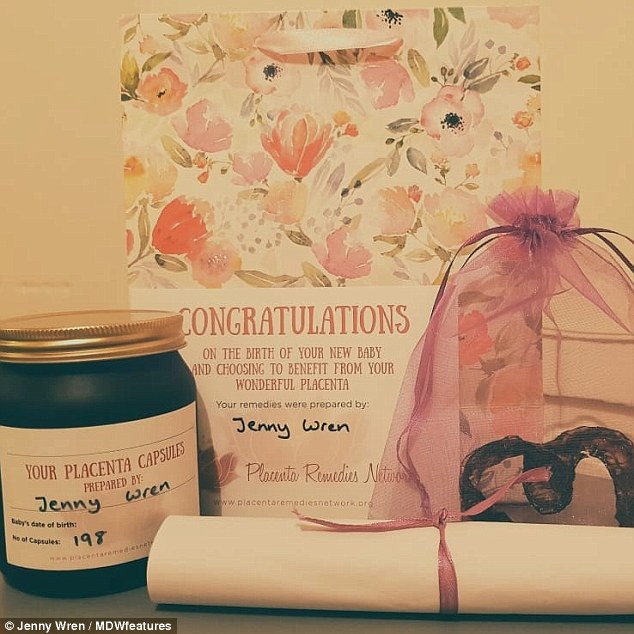 ‘My daughter was born at home with no midwife’

‘Then my daughter, Autumn-Violet, was born at home with a doula and no midwife because that’s what made me feel safest. Her birth was incredible, euphoric and affirming.’

Ms Wren then decided to become a doula herself and help other women give birth.

Although a doula isn’t a medical professional, they provide emotional support and physical aid when required.

‘After my son was born I became fascinated with everything to do with birth and babies,’ she said.

‘I was amazed that all this information was so freely available and yet women were still birthing in situations that worked against basic birth physiology. 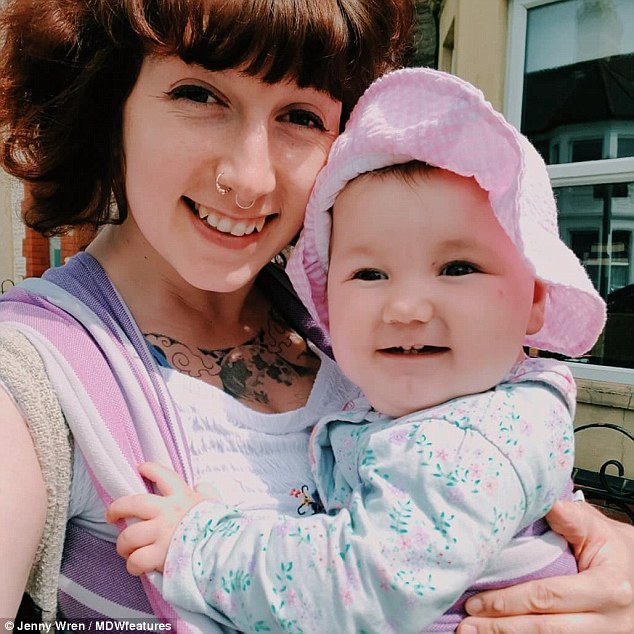 Jenny Wren, 27, pictured with 10-month old daughter Autumn-Violet, drank her own placenta in a blackberry and pear smoothie after she gave birth

‘I want to support other women to have positive experiences’

‘I wanted to support other women to have positive experiences, so I went to university to study maternity care. From there, I trained as an antenatal teacher.

‘I found it difficult preparing women for birth and for them to then be let down and coerced or traumatised during labour.

‘That was when I knew that I wanted to attend births and make a real difference for women.

‘With the internet and social media, it is so easy to access a wealth of information about your birth choices.’

Find out more about placenta encapsulation or doulas by visiting Jenny’s website, Mama Bird Baby, or her Instagram @mamabirddoulaa.

Celebrity mothers who ate their placenta after giving birth

The former Grey’s Anatomy actress took placenta pills after having her son Joshua.

She learned about the possibility of freeze-drying her placenta when a new mother across the hall from her at the hospital did it.

Heigl decided to get placenta pills of her own made once she had her son.

The reality star freeze-dried her placenta after having her youngest son Reign.

She even posted an Instagram photo with the placenta pills in it to broadcast that she chose to take them.

Her caption said: ‘Yummy…PLACENTA pills! No joke…I will be sad when my placenta pills run out. They are life changing! #benefits #lookitup.’

Supposedly Kim Kardashian was going to do the same after her son Saint was born but there has been no confirmation if she did.

On their reality show, the twins drank Tia’s placenta that was mixed with brandy in 2013.

Viewers watched as they poured the mixture into glasses before drinking it together.

Right after they drank it Tia said: ‘Oh my God, I see residue.’ But she admitted later that it didn’t taste bad.

It was indeed a sister, sister moment for the duo.

The Girls star had her placenta chopped up into 20 pieces and frozen.

Every morning she would then grab a piece and toss it into her breakfast smoothie.

The smoothie included her placenta, fruits and milk. She said it helped give her a much needed boost in the morning.