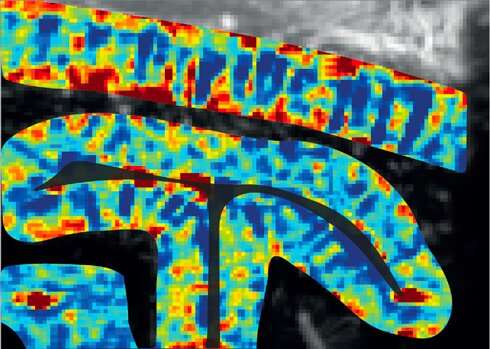 Since its introduction in 2011, functional ultrasound (fUS) imaging is progressively rising as a predominant neuroimaging modality. From this technique, developed by the team of Mickael Tanter (laboratory Physics for Medicine Paris, Inserm/ESPCI Paris-PSL/PSL University/CNRS), has emerged a now fast-blooming research field in neuroscience. Ample evidence of this are three articles, published only a few days apart in high-impact journals (two publications in PNAS, another in Nature Communications), which report major scientific advances on both the fundamental aspect of the method and the applications for preclinical research.

fUS imaging maps the brain activity through the detection of the cerebral blood flow associated with this neuronal activity. The team of Serge Charpak at Institut de la Vision (Inserm/Sorbonne Université) has been studying for several years the neurovascular coupling, i.e. the cellular mechanisms binding the neuronal activity and the vascular flow at microscopic and mesoscopic scales. In collaboration with Physics for Medicine Paris laboratory and the laboratory of Patrick Drew (Pennsylvania State University), the team has studied the link between the ultrasound signal recorded in a single voxel with the neuronal activity within that same voxel, by co-registering fUS and bi-photon microscopy measurements. This has resulted in the establishment of transfer functions, optimized through automated learning, which enable to predict fUS signals from sensory stimulations. “The determination of transfer functions describing the neurovascular coupling is essential, as these functions could enable to improve data processing for human imaging on one hand, and on the other hand, they could be used to monitor the alterations of cerebro-vascular functions over time,” says Serge Charpak.

Revealing a default mode network in the mouse brain

In a study published in PNAS, the team of Zsolt Lenkei at the Institute of Psychiatry and Neuroscience of Paris and the laboratory Physics for Medicine Paris have brought to light the existence of a neural network, known in humans as the default mode network, but so far never observed functioning in mice. Neurons of this network communicate with each other at resting state, and deactivate once a task starts. The function of this network is characteristically affected in brain disorders such as depression, Alzheimer disease, schizophrenia or autism. Studying the default mode network in mice, a major preclinical model, could enable the development of new therapeutic drugs using a translational approach, particularly for the treatment of neuropsychiatric disorders.

The third study, also published in PNAS, associates the laboratory Physics for Medicine Paris with the teams of Pierre Pouget at the Paris Brain Institute and Serge Picaud at the Institut de la Vision (Sorbonne Université/Inserm/CNRS), and shows activation maps of the primary visual cortex in primates at an unequaled precision. fUS imaging, performed on a vigil primate presented with visual stimuli on a screen, reveals very fine activation maps as well as cortical structures carrying the ocular dominance between the left and right eyes. The technology enables to distinguish the differential activation of layers of the primary visual cortex across its entire depth. This unprecedented level of description demonstrates again the exquisite spatial resolution and sensitivity of fUS imaging compared to other existing neuroimaging modalities.

The laboratory Physics for Medicine Paris develops functional ultrasound imaging in close collaboration with Iconeus, a start-up company issued from the laboratory and funded in 2016. “We are living fascinating times for neuro-functional imaging, as we are seeing a real community of researchers, neurobiologists, pharmacologists and clinicians gathering around this new modality,” says Mickael Tanter.