Thousands more NHS patients could have lifesaving liver transplants in the coming years thanks to ground-breaking technology that increases the number of organs available by up to a third.

The National Institute of Health and Care Excellence (Nice), the NHS spending watchdog, has recommended – for the first time – that a technique called machine perfusion be used to keep donated livers alive prior to surgery.

Donor organs are usually chilled to just above freezing once they have been removed. But machine perfusion keeps organs at around body temperature – 37C – and feeds them with oxygen-rich blood. Experts say it is revolutionising surgery because it trebles the time livers last out of the body from eight hours to 24. 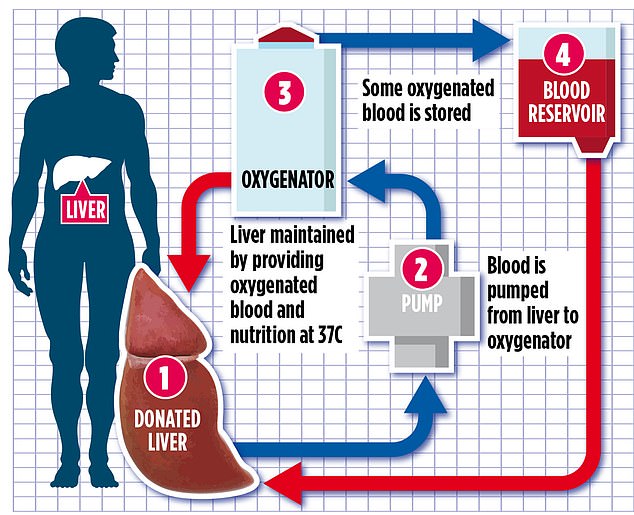 Chris Watson, professor of transplantation at the University of Cambridge, says: ‘This technology represents a game-changer in transplant medicine and is great news for patients on waiting lists.’

Liver disease kills more than 14,000 people a year in the UK.Major causes include excess alcohol intake, obesity and viral hepatitis. About 1,000 sufferers a year undergo a liver transplant but hundreds more die before they get the chance. One reason is a third of donor livers are rejected, often due to existing scarring or disease.Machine perfusion could see many discarded livers put to good use. Once the liver is removed, its major arteries and veins are connected up to the device which pumps body-temperature blood through it.

In April 2018, a study showed livers plumbed into a machine perfusion device called Metra functioned better after transplant than those chilled – especially the most marginal ones.

For more than half-a-century, ‘harvested’ organs scheduled for transplant have been stored on ice to preserve them during transportation. Cooling them from body temperature to as low as 4C was thought to be the best way to limit damage during transportation. But studies now show they do much better if they are kept warm and fed with oxygen-rich blood. Not only does it keep them going for longer but it means doctors can check how they function before they carry out the transplant.

Gemma Jolly, 41, a supermarket cashier from Northamptonshire, was one of the first in the UK to benefit from the new technology.

When she was in her 20s she was diagnosed with auto-immune hepatitis, where the immune system attacks the liver and causes it to become inflamed. After the birth of her children, George and Harrison, in 2001 and 2006, her liver started to pack up completely.

She became progressively ill and in May 2016 had a liver transplant. But it failed and she was put back on the waiting list. Last November, a second matching liver was located and this time doctors at Queen Elizabeth Hospital Birmingham used the Metra machine to keep it alive.

During the six-hour operation, surgeons removed Gemma’s liver before connecting the new one to her blood vessels. Doctors later told her the operation would have failed without the new technology, because there had been a delay getting the donor organ to her.

Gemma says: ‘I’ve got my life back and my boys have got their mum back.’

Now the technique is being rolled out to other types of organ transplant surgery. US firm TransMedics has developed a machine that keeps donor hearts warm and beating during transit. More than 60 NHS patients have so far had transplants where it has been used.

Meanwhile, OrganOx – which developed the liver perfusion system backed by NICE – is now working on a similar one for kidneys.

If it works, the impact could be huge – more than 5,000 people in the UK are on the waiting list for a new kidney.

A perfusion machine for the pancreas is also in the pipeline.