The NHS claims to have saved nearly £294million this year by telling doctors to stop dishing out expensive branded medications.

Health watchdogs encourage the prescription of generic drugs or ‘biosimilars’ – near-identical products which are far cheaper but just as effective.

The crackdown has allowed the cash-strapped NHS to slash its bill for the most expensive drug by £110million alone in the last financial year. 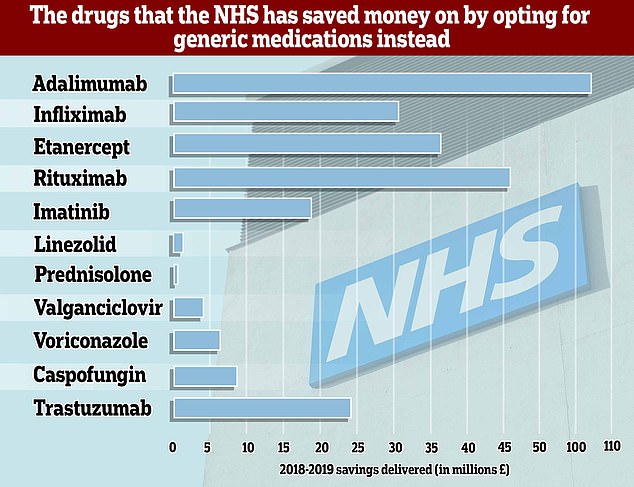 Hospitals spent £290million on adalimumab – a drug primarily used to treat arthritis but also given to patients with Crohn’s disease – in 2018/19.

This is 29 per cent down from the £400million the NHS spent the year before on the medication, which is sold under the brand name Humira.

It came off patent at the end of 2018 – midway through the financial year, paving the way for generic versions of the medication.

The branded form of the drug cost £704 a month or £8,500 annually. Generic medicines and biosimilars normally cost a fraction of the price.

Simon Stevens, chief executive of NHS England, said: ‘The health service is one of the most efficient health services in the world.

WHICH DRUGS DID THE NHS SAVE MONEY ON?

‘But as part of the Long Term Plan, we will continue to drive changes to ensure every NHS pound is spent wisely and patients have access to innovative life changing medicines.’

He added that the crackdown is allowing the NHS to deliver effective treatment for patients ‘while saving the taxpayer hundreds of millions of pounds’.

Figures show the NHS also saved £45million on rituximab – an antibody therapy used to treat some forms of cancer – over the course of the year.

And it saved £36million and £32million on etanercept and infliximab, respectively. Both are given to patients battling auto-immune disorders.

The NHS said the money would be reinvested in other new, innovative and cost-effective treatments but has yet to clarify what these could be.

Last summer the NHS announced it saved £324million over the course of 2017/18 – 10 per cent more than it cut through the same process this financial year.

Health chiefs have previously announced plans to widen the uptake of the scheme, in hope of saving closer to the £500million mark per year by 2020/21.

James Roberts, political director of the TaxPayers’ Alliance, said: ‘Despite the slight relapse since last year, this news will be tonic to taxpayers who worry that the NHS is forever wasting money.

‘NHS treatments don’t come cheap, so it’s refreshing to hear the health service is on course to hit savings targets on tablets.

‘Brits pay for and deserve world-leading public services, with the NHS expected to access the latest technologies, medicines and clinical innovations to get better outcomes for patients and value for money for the public purse.

‘All eyes will be on health chiefs to meet their 2021 targets for savings on pills, so they can prove that they are keeping to the course and cutting down on unnecessary waste.’

HOW DOES THE NHS BUY MEDICINES?

The NHS spent approximately £17.4 billion on medications in 2017, a figure which has been growing by an average of five per cent a year since 2010.

For a medicine to be funded for the NHS, it first has to be approved by the National Institute for Health and Care Excellence.

New medicines then have to have a budget impact test to make sure it is worth the money a pharmaceutical company is charging for it.

How many people will take the drug, the condition it is used to treat, and what alternative treatments are available are all likely to be considered.

After NICE has decided who should be eligible for a medication and has confirmed how much it will cost, the health service can choose to buy it.

NHS England can negotiate directly with suppliers if a drug is going to cost more than £20 million a year during any of the first three years of its use.

In this way, the NHS may be able to secure drugs for below their market rate.

The NHS has also ruled that low value medicines and those which are widely available in shops should not be offered on prescription.

Earlier this year it was revealed laxatives, sun cream, wart treatments, cough mixture and diarrhoea therapies would no longer be funded by the NHS for most patients.