Pfizer is testing a new two-in-one vaccine targeting both Covid and flu amid sluggish uptake of its booster shot.

The first patient was inoculated with the vaccine this week in early clinical trials, with a total of 180 patients expected to get the dose.

Using mRNA technology popularized over the Covid pandemic, the shot targets BA.4 and BA.5 variants as well as four strains of the flu.

Vaccine maker Moderna is also testing a vaccine targeting Covid and flu, as well as one for these viruses and RSV — behind America’s winter wave. None are expected to be ready for this year’s flu season.

Uptake of the updated bivalent booster vaccine is lagging in the US, with just a handful of Americans who are eligible coming forward. 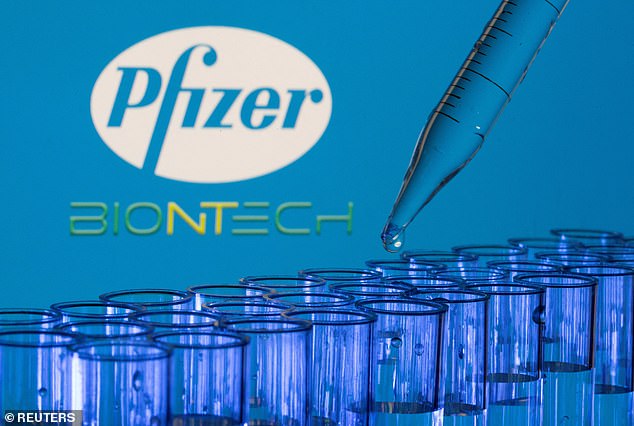 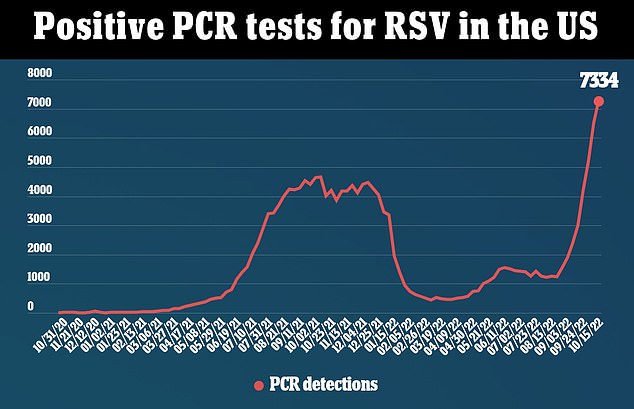 The above graph shows the number of positive tests for RSV viruses by date in the United States. It reveals they have now reached their highest levels since 2020, before the pandemic began. Data is from the Centers for Disease Control and Prevention

Pfizer revealed that the first patient was injected in its Phase 1 trials — the earliest clinical trials — this week.

These tests are to ensure the vaccine is safe and effective, but the new vaccine will need to go throughmore tests before it can be rolled out nationwide.

The trial has recruited 180 people in the US who are between 18 and 64 years old and will be followed for six months.

‘Pfizer is deeply proud of our continued work to explore its potential to protect against influenza and Covid in one combination vaccine,’ she said.

‘We think [this] could simplify immunisation practices against these two respiratory pathogens, potentially leading to better vaccine uptake for both diseases.

‘Even with existing seasonal influenza vaccines, the burden of this virus is severe across the world causing thousands of deaths and hospitalisations every year.’

Currently the flu vaccine is rolled out every year to shore up immunity against the virus among those who are more vulnerable.

Some scientists suggest that Covid vaccines will also be needed every year, because the immunity they spark wanes over time.

So far health officials have suggested that people should get their flu and Covid shots at the same time with one in each arm.

But the tests of the new vaccine by Pfizer are seeking to reduce this to just one inoculation by grouping the two together.

Pfizer has announced its experimental RSV vaccine is highly effective — in a glimmer of hope for parents and doctors.

The pharmaceutical giant announced its shot can reduce the risk of hospitalization among infants up to six months of age infected with the seasonal virus.

If approved, it would be the first vaccine for RSV, which kills between 100 and 500 children under five and hospitalizes about 58,000 each year.

That could prove a lifeline for hospitals which are currently overwhelmed with unseasonably high cases of the virus – which has been blamed on lockdowns suppressing children’s immunity.

The vaccine is administered to pregnant women during the late second to third trimester of their pregnancy. Vaccination during pregnancy allows the antibodies to travel into the placenta, conferring protection to the fetus.

Pfizer’s trial included 7,400 pregnant women in 18 countries who either received a dose of the experimental vaccine or a placebo.

Pfizer expects to finalize its petition for approval from the Food and Drug Administration by the end of 2022, potentially setting up a federal go-ahead before the next respiratory infection season kicks off.