Disowned by his father and ill-equipped to deal with the stigma of HIV/AIDS, a young man who died in the central Indonesian city of Yogyakarta early this year had “effectively committed suicide” by stopping anti-viral medication, according to a doctor familiar with the case.

The 20-year-old man’s shocking death is a sign of an out-of-control but little acknowledged epidemic of HIV among gay men in Indonesia that researchers say is now being fueled by a gay hate climate whipped up by the country’s conservative political and religious leaders.

After the young man died in February at a Yogyakarta shelter, no one from his immediate family took the body, said Sandeep Nanwani, a doctor and HIV outreach worker. The previous year, Nanwani had helped raise funds to move him from Jakarta, the capital, where he’d lost his job due to his deteriorating health.

“The family disowned him. They didn’t want anything to do with him,” said Nanwani. “In the shelter, he felt like there’s nothing, no future. And then he started skipping his medications.”

According to the United Nations, human immunodeficiency virus, or HIV, affects more than a quarter of Indonesian men who have sex with men, a dramatic increase from 5 percent in 2007. In Jakarta and the capital of Bali province, Denpasar, the rate is 1 in 3.

In common with the wider population of HIV-positive people in Indonesia, the majority are not tested for HIV until developing symptoms of illness indicating their immune system has been compromised. Only a small minority receive anti-viral medications that can give people with HIV near-normal life expectancy.

Condom use and testing individuals from high-risk groups for the virus—before it weakens the immune system causing Acquired Immune Deficiency Syndrome, or AIDS—are both crucial to curbing its spread, according to communicable disease experts.

But Indonesia is failing at both and is now making it even more difficult for health workers to reach gay and bisexual men.

Highly publicized police raids targeting gay men and a vicious outpouring of anti-LGBT rhetoric from officials and other influential figures since early 2016 have caused significant disruption to HIV awareness and testing programs, according to a Human Rights Watch report released Monday.

Many of the outreach workers interviewed by the rights group reported “substantial and unprecedented negative impacts on their ability to contact and counsel” gay and bisexual men, the report said.

In Jakarta, raided venues such as saunas and clubs that were among the so-called “hotspots” for health workers to make contact with gay men closed.

“The remaining locations are getting harder and harder to work at,” said a health worker interviewed by Human Rights Watch. “Fewer and fewer guys agree to get tested or take condoms each time.”

Laura Nevendorff, a researcher at the HIV Research Center at Atma Jaya Catholic University, said the police practice of using condoms as evidence against gay men has had a pernicious ripple effect, turning the crucial rubber safeguard into possible grounds for criminal prosecution.

Though deeply frowned upon, homosexuality is not illegal in Indonesia. Police have used an anti-pornography law to prosecute gay men.

“They are afraid,” said Nevendorff. “They think if they are carrying condoms, it could jeopardize their safety.”

Because of conservative morality in the world’s most populous Muslim nation and the intense LGBT backlash, Indonesia’s HIV prevention strategy does not openly target gay or bisexual men, who along with injecting drug users, female sex workers and transgender people are the high-risk groups in the Indonesian epidemic. 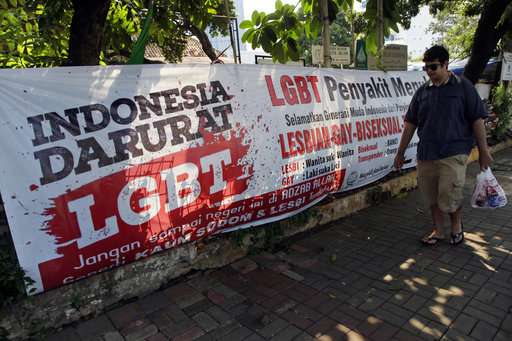 Instead, overtaxed nongovernment organizations are trying to fill the gulf in a climate hostile to their work.

The failure of that approach is clear when compared with Thailand, a neighboring developing country of similar income level to Indonesia that has addressed the epidemic more openly.

Ignatius Praptoraharjo, a public health policy expert and HIV researcher at Atma Jaya, said the epidemic is set to worsen, particularly among young men, who are already dominating new infections.

“We believe the anti-homosexual (rhetoric) will fuel the HIV epidemic among men who have sex with men,” he said.

Among gay and bisexual men aged 24 or younger, the center’s research shows no difference in frequency of condom use between those who have HIV and those who don’t.

Effectively, “they are waiting in turn to be infected,” he said.

Differences in care between Indonesia and Thailand are also stark.

Just 12 percent of people with HIV in Indonesia are taking anti-viral medication, compared with nearly 70 percent in Thailand.

Nanwani said the toll of the health crisis is “hidden” from view.

Frequently, people with HIV/AIDS are dying alone, either afraid to reveal their health status—and in many cases their sexual orientation—to their families or rejected by them when they do.

Nanwani said a community group he is involved with in Yogyakarta paid for about 10 burials last year of people who died from HIV/AIDS because they left no information of family to contact.

In the case of the 20-year-old man who died in February, an aunt took his body for burial in his deceased mother’s village.

On Facebook, he posted frequently about his failing health and dismay at the rising tide of anti-LGBT sentiment in Indonesia.

His final message said God would help him recover if only his mind was capable.