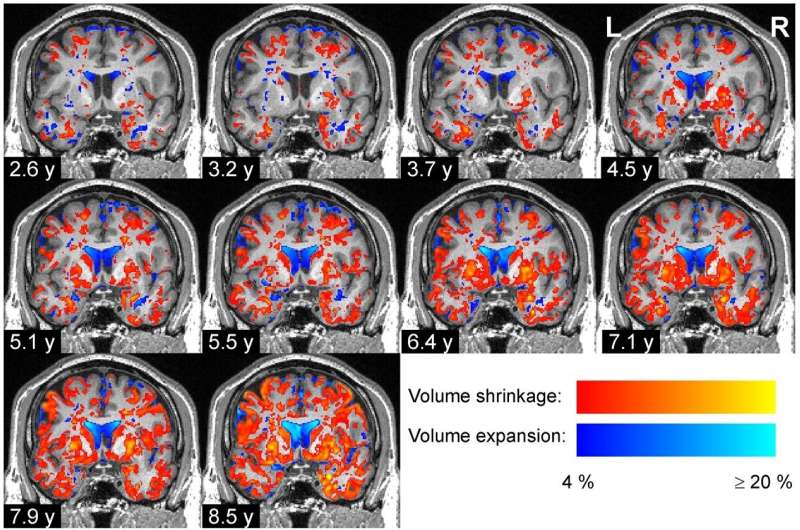 A team of researchers from Forschungszentrum Jülich, Heinrich-Heine-University Düsseldorf and Ernst-von-Bergmann Klinikum Potsdam analyzed the changes of brain volumes in 37 Parkinson’s patients and 27 controls at up to 15 time points over up to 8.8 years using magnetic resonance imaging (MRI). Previous in vivo studies had either measured brain volumes in Parkinson’s patients only at fewer time points or over shorter periods.

At the beginning of the study, the team found that the volumes of several brain regions were smaller in the Parkinson’s disease patients than in the control group, whereas some regions were enlarged in the brains of patients, presumably because of compensatory effects. Over time, the difference between the groups became increasingly widespread and pronounced: The brain volumes of the Parkinson’s disease patients declined almost twice as quickly as those of the control group, particularly in the gray matter. Mostly affected by this volume decrease were the temporal and occipital lobes, neighboring parts of the inferior parietal lobe and ventral parts of the frontal lobe.

The team analyzed in detail which parts of the brain changed over time using neuroanatomical atlases, primarily the Julich Brain Atlas, which is openly accessible via the HBP’s EBRAINS infrastructure. This detailed anatomical analysis revealed a very specific regional pattern of volume changes in the Parkinson’s disease patients that was different from healthy aging. The researchers found that the volume decreases of cortical areas, amygdala and basal forebrain in Parkinson’s patients were correlated with the worsening of clinical symptoms.

The specific pattern of regional volume decreases that they revealed coincided with the stage scheme of Parkinson’s disease proposed by Heiko Braak in 2003. Braak and colleagues had analyzed 168 postmortem brains for the presence of aggregates form by misfolded alpha-synuclein proteins and postulated progressive propagation of the disease in six stages starting at the lower brain stem nuclei and olfactory bulb and progressing via the midbrain towards the prefrontal and premotor cortices.

“Our study provides detailed in vivo data about how the brain of Parkinson’s disease patients degenerates across space and time, and the pattern we find coincides with Braak’s stages,” says Peter Pieperhoff, first author of the recent study.