Scientists discover how to target mutations that in 50% of cancers

Cancer breakthrough: Scientists discover how to target ‘undruggable cancers’ which affect 50% of cases

Researchers at the University of California, San Francisco used a drug being developed by Revolution Medicines to slow the growth of lung, skin, colon and pancreatic cells in the lab.

The cancers they hope to treat are particularly stubborn thanks to mutations that make ells grow out of control.

Since their experiments in animals so successfully disrupted this process, the researchers plan to expedite it to clinical trials, where it could change the way doctors treat half of the most stubborn, deadly cancers they encounter. 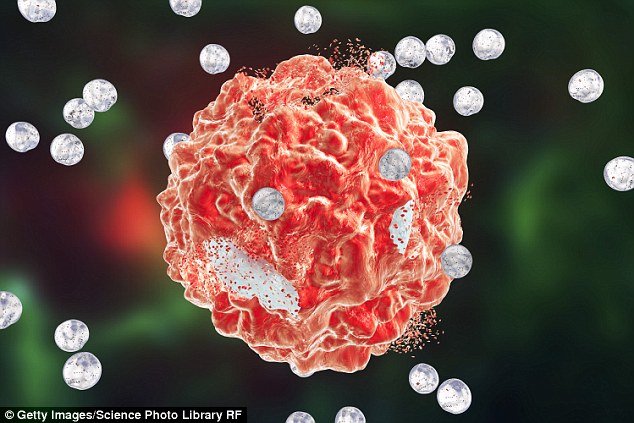 Scientists have discovered a drug that can target a signalling pathway that switches about half of all cancer cases into overdrive, offering hope to treat drug-resistant tumors

Any body tissue can become cancerous because any cell’s copying process can be corrupted by genetic mutations that cause it to grow out of control.

Our tissues are constantly repairing themselves by creating more cells, which is accomplished through cellular division.

These divisions are triggered by communications passed through a sort of cellular game of telephone, or a signalling pathway.

As the instructions for cell division are passed down the line, they’re vulnerable to get interrupted, which can then cause a genetic mutation that causes cells to multiply out of control.

One of the signalling pathways involved is the MAPK/ERK pathway. Messages to turn cell division ‘on’ or ‘off’ travel through this pathway.

But if one of the proteins that acts like a switch gets stuck in one position or the other, divide out of control, becoming a cancer.

The best way to get rid of these tumors is to surgically remove them, but they can also become too large and entangled with healthy tissue for this to be possible.

In this case, doctors use chemo or radiation to attack rapidly dividing cells, but sometimes it is too late, and this does not rewrite the instructions for division itself.

But a drug that effectively rewrote the MAPK/ERK pathway instructions to get the ‘on/off’ switch protein back to its normal position could be a game-changer for the treatment of many cancers.

In their lab experiments with Petri dish cells for lung, skin, pancreatic and colon cells, the researchers had unprecedented success doing exactly this.

Previously, the ‘on/off’ proteins seemed to just be too complicated to alter or the corrupted message would just find another signalling route to travel down when scientists attempted to intervene in the MAPK/ERK pathway.

This time, however, it worked.

By targeting an even earlier point in the line of communication, the University of California, San Francisco scientists were able to essentially mute the external signals telling the cells to grow by blocking a molecule called SHP2.

‘The implications of being able to block SHP2 are broad and may extend to more types of cancer than seen in the present study,’ lead study author Dr Trever Bivona said.

His treatment slowed the growth of all of the Petri dish cancers and even killed cancer cells off in some cases.

In human lung cancer cells grown in human mice, the new drug also slowed down the growth of the tumors dramatically, which the researchers will help them get the drugs to human patients faster.

‘Almost every major oncogene I can think of coopts this pathway in one way or another, and many of these cancers currently have no effective targeted therapies or eventually develop resistance to available targeted therapies,’ said Dr Bovina.

‘It’s exciting to anticipate such important work moving quickly from the laboratory to the clinic.’