Slug slime may be better than stitches: The natural ‘glue’ is stronger and leaves less scarring, study suggests

The defensive slime is produced by a common garden slug found in the UK to fouls the jaws of any would-be predator .

The Dusky Arion slug which can grow up to seven centimeters long can be found in gardens across Britain – but it also produces a slime that can be used to help wounds heal.

Now two studies have revealed more about how this glue achieves its strong sticking power and flexibility, insights that could be used to create better medical adhesives. 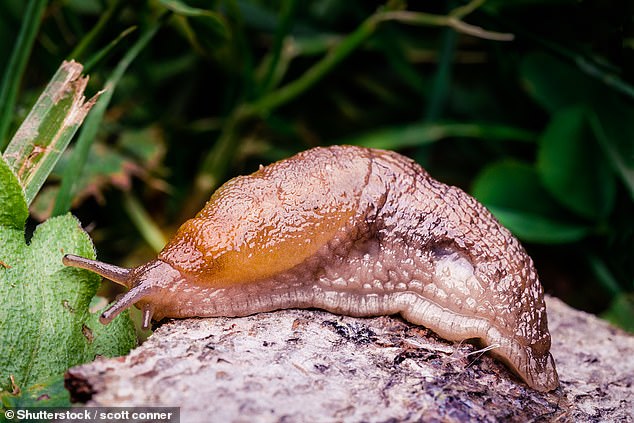 Stitches are strong but leave scars and may raise infection risks, and most medical adhesives are either too weak or inflexible to hold wounds closed – but slug slime may be the answer

She said: ‘Typical sutures like staples and stitches often lead to scarring and create holes in the skin that could increase the chance of infection after surgery.

‘Understanding the roles of adhesive proteins in the slug glue would aid in the creation of a medical adhesive that can move and stretch yet still retain its strength and adhesiveness.’

Ms Falconer analysed 11 proteins created in the slime of the Dusky Arion slug and discovered that some proteins can bind themselves to form a strong and flexible three-dimensional network.

Her work was expanded by Christopher Gallego-Lazo, also an undergraduate researcher in lab of Professor Dr Andrew Smith which is investigating the nature of the adhesive secretions of a variety of mollusks.

Mr Gallego-Lazo found that the double network structure that makes the slug glue is incredibly strong and can withstand large amounts of force.

The glue has a stiff protein network that uses sacrificial bonds to absorb energy and protect an intertwined and deformable network of carbohydrates.

Mr Gallego-Lazo discovered the strength of the slim can be adapted by changing some of the chemical bonds inside the protein network.

These bonds can be reformed naturally, enabling the glue to deform while maintaining its strength.

He said: ‘Few studies on biological adhesives have identified the exact nature of the bonds holding the glue together.

‘This knowledge can guide the development of an organic synthetic adhesive that would reduce the risk of infection and scarring compared to stitches and staples and could be applied rapidly and simply.’

Prof Smith’s explained the slime are gels, consisting of ‘a dilute, tangled network of polymers.’

He said: ‘These adhesives are neither truly solid, like a cement, nor fluid, like the water under a sucker.

‘For lack of a better term, they are often referred to as mucus.

‘The structure of these gels varies widely, however, and the catch-all term ‘mucus’ is probably inappropriate.

‘The function of these gels varies widely as well. Some gels are outstanding lubricants. Some are excellent adhesives.

‘Intriguingly, it appears that many molluscs can convert a slippery gel into a powerful adhesive.

‘Thus, we are comparing the structure of different adhesive gels with the goal of determining the functional significance of structural features.’