‘I get a second chance at life’: Woman who tried to kill herself with a shot to the face becomes the youngest person ever to receive a face transplant at 21 in historic 31-hour operation

A 21-year-old woman became the youngest person in the United States to receive a face transplant, three years after shooting herself in a botched suicide attempt.

Katie Stubblefield doesn’t remember the day she tried to take her own life in the bathroom at her older brother’s home in Mississippi on March 25, 2014 – nor much in the months after that.

She was transferred from her local hospital in Oxford to one in Memphis, Tennessee, then on to Cleveland, Ohio, in a desperate bid to save her life.

By the start of 2016 she was declared stable, and on May 4, 2017 she made history, undergoing 31 hours of surgery at the Cleveland Clinic to receive a face transplant that will restore her face structure, and allow her to chew, swallow and breathe independently for the first time in years.

‘I get a second chance at life now,’ Katie, now 22, said in a National Geographic documentary, released today to coincide with the cover story ‘The Story of a Face’, revealing her struggle.

Katie is the 40th person in the world to receive a face transplant, and the third at the Cleveland Clinic, which is regarded as the pioneer in facial reconstruction in the US.

However, hers was slightly different to the ones that came before: not only is she the youngest ever, but it was the longest face transplant ever performed – pushing the surgical team to new limits. 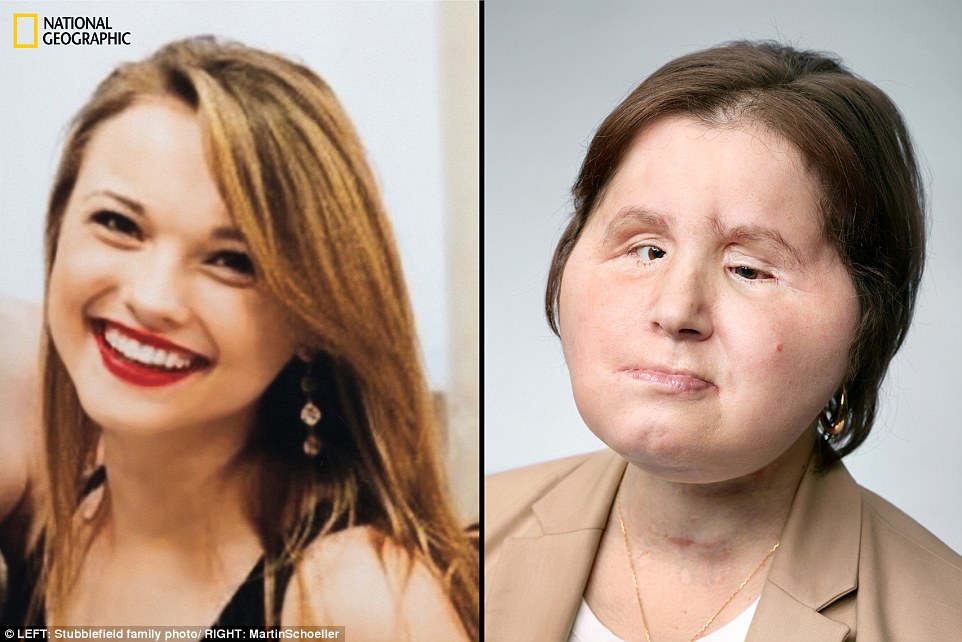 Historic: Katie Stubblefield tried to take her own life in March 2014 with a rifle. On May 4, 2017, she became the youngest person ever to receive a face transplant. Pictured: Katie (left) aged 17, eight months before her attempted suicide; and (right) at 22, a year after her transplant. She is now on immunosuppressant drugs as she learns how to walk, speak, and read Braille

Relatives told National Geographic that Katie was a fun girl with an infectious sense of humor and wit growing up in Lakeland, Florida. She was close to her older sister Olivia and older brother Robert.

But over time, they say, they started to see her recoiling, pressuring herself to be the best in academia and sport.

When she was around 16 years old, her parents Alesia and Robbb, a minister, moved the family to Kentucky, then a year later to Oxford, Mississippi.

There, both Alesia and Robb became teachers at the same Christian school where Katie enrolled as a student.

According to the magazine, when Katie arrived at school she met a fellow student who immediately captured her attention. The two started dating and she was soon talking ‘love’ and ‘marriage’.

He was a rock for Katie as she endured uncomfortable and severe health problems. In January 2014, in her senior year, she had her appendix taken out, the digestive issues she had long battled started to flare up, and she had her gallbladder removed.

But in March, the headmaster of the school – who Katie saw as a source of support – made both her parents redundant.

On March 25, she saw texts on her boyfriend’s phone from another girl, and when confronted, he ended their relationship.

She went to her brother’s house, distressed. After a while, she went to the bathroom and shot herself under the chin using his hunting rifle, a .308-caliber.

Robert told National Geographic he rushed upstairs, found Katie on the floor, and ‘her face was gone’. 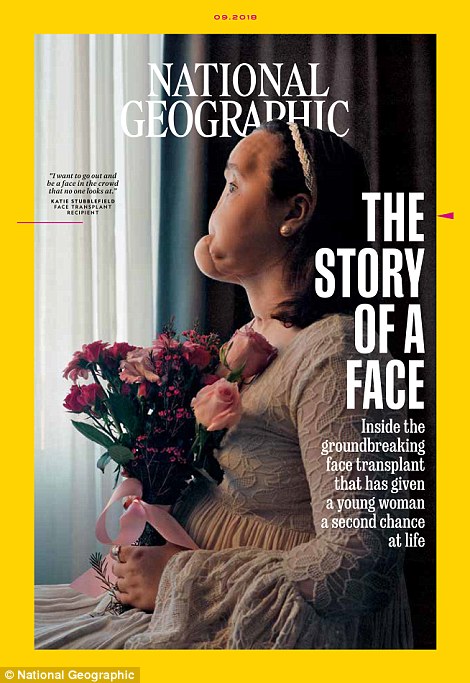 Katie’s was the longest face transplant ever performed, and she is the youngest recipient.National Geographic photographers shadowed her for two years, and today shared her ordeal in their cover story The Story Of A Face

LIFE OR DEATH: HOW DOCTORS IN THREE CITIES WORKED NIGHT AND DAY TO SAVE KATIE FROM DEATH

According to National Geographic, when Katie was hospitalized in March 2014, she was taken straight to a hospital in Oxford, Mississippi, with intracranial injuries.

Shortly after, she was transferred to Memphis, Tennessee, where doctors stabilized her.

They inserted a tracheostomy, stabilized her jaw and cheekbones, sewed her eyelids shut so her corneas could heal, and patched up a torn brain membrane.

Over the next two weeks they opened her skull up to stem bleeding on her brain, used skin grafts to close open wounds on her face.

However, her wounds would not stay shut because the skin grafts kept failing, so they recommended transferring her to Cleveland Clinic, which is a world leader in intracranial trauma.

As surgeons raced to save her and patch up her external and internal wounds, they mentioned the term ‘face transplant’ to Katie’s family. They had never heard of it before.

The doctors explained that Katie was young, and at the time not stable enough to undergo such an operation, but that Cleveland may be able to help them.

On May 2, 2014, she was transferred to Ohio. First thing,they repaired her bone structure, including her nose, nasal passage and jaw,

The next two years were a whirlwind of operations, with Katie being ferried in and out of hospital, rehab and the Ronald McDonald house where her family was staying to be near her.

Eventually, at the end of 2015, she was declared stable. 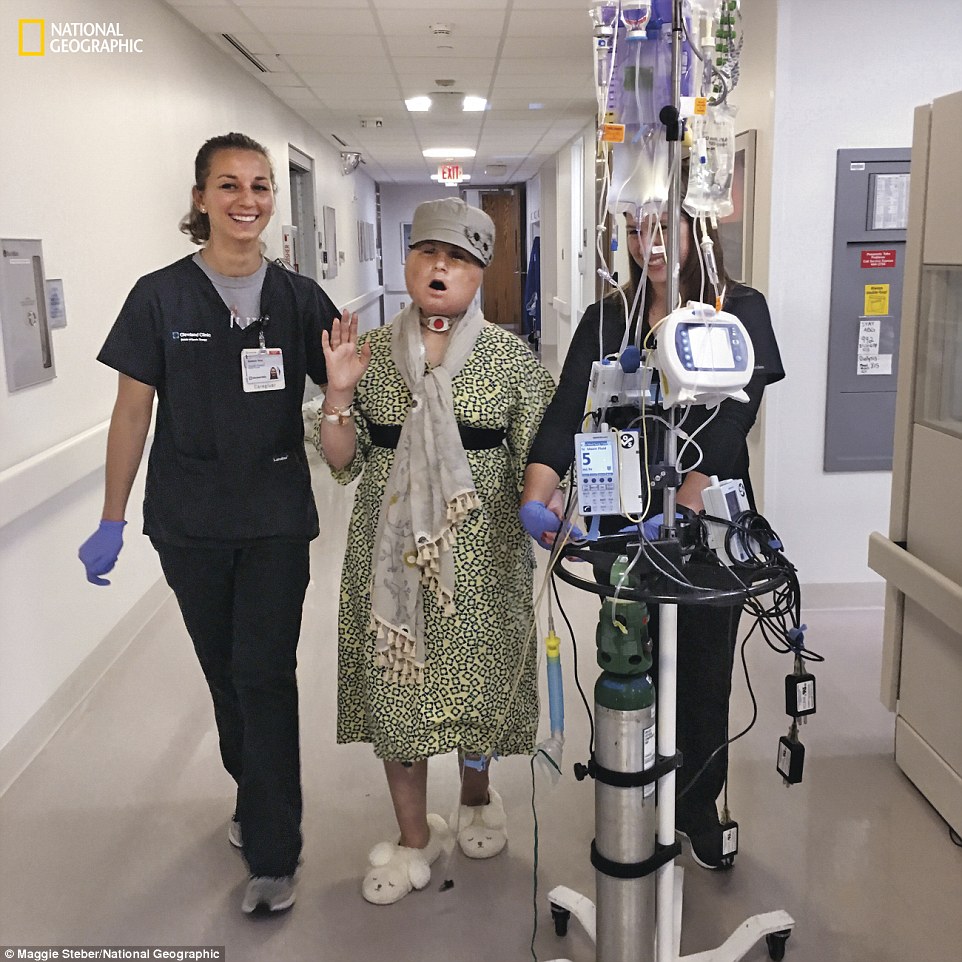 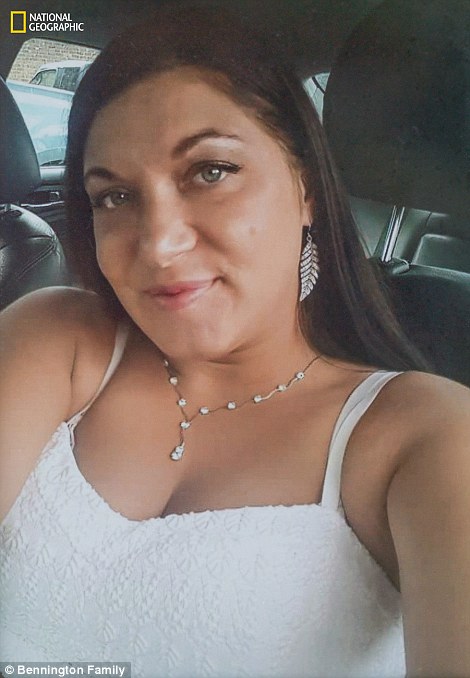 Donor: Katie received the face of Adrea Schneider (pictured), a mother-of-one who died of a drug overdose at 31

THE DONOR: MOTHER-OF-ONE, 31, WHO DIED OF AN OVERDOSE AFTER A LIFETIME OF TURMOIL SET OFF BY HER DRUG ADDICT MOM

She has received the face of Adrea Schneider, a mother-of-one who died of a drug overdose at 31, according to National Geographic.

Adrea’s grandmother Sandra had to adopt her at 11 years old due to her mother’s drug addiction. Adrea’s mother died two years later.

Though Adrea was a registered organ donor, Sandra had to approve the use of her extremities.

Adrea’s 15-year-old son knows that his mother has saved the lives of seven people thanks to organ donation, but he still doesn’t know her face was used, National Geographic says.

Katie will not look like Adrea, because the face molds to her body.

Nonetheless, such a transformation is a psychological ordeal that defies our entire understanding of our sense of self.

Katie was given hours of therapy and psychological screening to ensure she was ready for such a step.

Before going into the operating theater, they 3D-printed a lower jaw that would account for 90 percent of the final result. The new version is modeled on a scan of her older sister’s jaw.

Then they went in.

For the operation, the surgeons had to replace her scalp, nose, upper cheeks, upper jaw, half of her lower jaw, forehead, eyelids, eye sockets, muscles, skin and most of her facial nerves.

This involved connecting the blood vessels of Adrea’s face to Katie’s face, so allow bloodflow into the face. 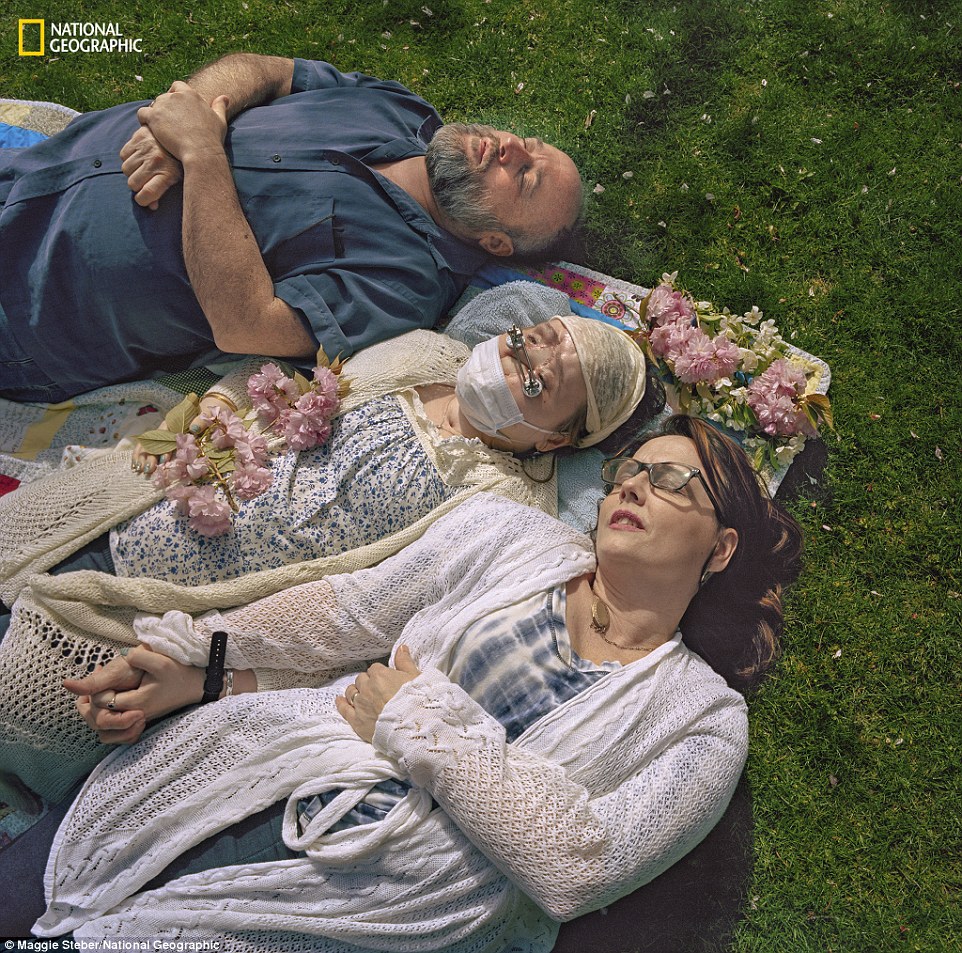 Family love: Katie’s parents Alesia and Robb (pictured) have been by her side through her recovery in Cleveland, Ohio

RECOVERY: KATIE NOW ‘HAS A MISSION IN HER LIFE’ TO HELP OTHER SUICIDE SURVIVORS

She is now on a cocktail of immunosuppressant drugs as she continues therapy to re-learn how to walk, move, speak, and read Braille.

‘[Katie’s parents] were heartbroken and shocked at what happened, but they have embraced it,’ said photographer Maggie Steber, who has shadowed Katie and her family for two-and-a-half years, every waking moment of every day.

‘They are warriors. They’re like eagles who are protecting a young bird. And now Katie has a mission in her life. She can try to save other young lives.’

As for Katie, she hopes to go back to school online, heading towards qualifying as a counselor. Ultimately, she says, she would like to work with other suicide survivors.