The secret tunnels inside your head: Immune cells take shortcuts when fighting deadly inflammation rather than using the bloodstream

Scientists have discovered humans have tiny secret tunnels that connect the skull to the brain.

These channels are thought to allow immune cells that are produced in the skull to take a shortcut to the brain if it is experiencing inflammation following a stroke or injury.

Experts previously thought immune cells were only transported to the brain via the bloodstream.

The study’s researchers, from Harvard, believe the discovery may help them understand how certain disorders cause brain inflammation, which can lead to loss of consciousness, seizures and even death.

They also believe the finding might enable them to better grasp conditions such as multiple sclerosis, which occurs when a person’s immune system mistakenly attacks their brain.

Scientists have discovered humans have tiny secret tunnels that connect the skull to the brain. These channels are thought to allow immune cells that are produced in the skull to take a shortcut to the brain if it is experiencing inflammation following a stroke or injury

The researchers set out to uncover whether immune cells enter the brain from bone marrow, where they are produced, in the skull or the large shin bone, known as the tibia.

To do this, they tagged immune cells called neutrophils, which are the first on the scene after an injury, with a fluorescent dye.

Those tagged with a red dye were injected into mice’s skulls, while those impregnated with a green dye were implanted into the rodents’ tibias.

The researchers then caused the animals to experience brain inflammation either by inducing a stroke or a meningitis-like disorder.

Results suggest that bone marrow in the skull provides more neutrophils after a brain injury than that in the tibia. 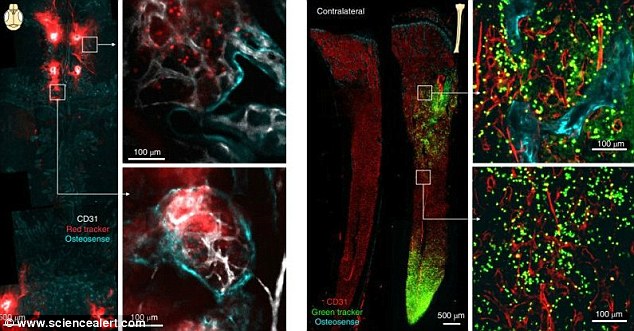 The researchers tagged immune cells, known as neutrophils, with a red dye in the skull and green in the shin of mice. After inducing brain inflammation, they found more immune cells from the skull enter the brain than from the shin, which they do via these secret tunnels

WHEN DO HUMAN BRAINS BECOME ‘OLD’?

Cerebrospinal fluid (CSF), which is found in the brain and spinal cord, changes its speed of movement in people older than their mid-20s, a Lancaster University study found.

These movements are linked to breathing and heart rates, with CSF changes previously being associated with conditions such as multiple sclerosis and high blood pressure.

It is unclear if these CSF changes are associated with brain disorders that typically affect the elderly, such as dementia.

Previous research suggests the volume and weight of the brain begins to decline by around five per cent per decade when a person reaches 40 years old.

On the back of these findings, study author Professor Aneta Stefanovska added further research ‘may open up new frontiers in the understanding and diagnosis of various neurodegenerative and ageing-related diseases to improve diagnostic procedures and patient prognosis.’

The discovery came to light during the development of a new method of investigating brain function, which has revealed the stage in life when the brain starts to deteriorate.

Previous research carried out by Imperial College London suggests brains’ grey matter, which enables the organ to function, shrinks during middle age and is related to cell death.

White matter, which enables communication between nerve clusters, also appears to decline at around 40.

This is also when the deterioration of myelin sheath occurs. Myelin sheath is a fatty substances that surrounds nerve cells and ensures proper function of the nervous system.

These changes are thought to occur due to a reduction in the hormones dopamine and serotonin.

‘We discovered tiny channels connect the marrow with the brain’

After making this discovery, the scientists assessed how neutrophils reach the brain.

Study author Dr Matthias Nahrendorf said: ‘We started examining the skull very carefully, looking at it from all angles, trying to figure out how neutrophils are getting to the brain.’

The scientists analysed the inner surface of the mice’s skulls, which revealed microscopic channels that directly connect the skull’s bone marrow to the protective lining that covers the brain.

Normally, red blood cells flow through these channels from the brain to the bone marrow, however, after a stroke or brain injury, this movement is reversed.

To discover if the same occurs in people, the researchers analysed pieces of human skulls taken from surgeries and found the same channels are present.

What ages the brain?

This comes after research released earlier this month suggested smoking cannabis ages a person’s brain by an average of 2.8 years.

This is compared to four years in schizophrenia patients, according to the largest study of its kind.

Brain ageing is defined as reduced blood flow through the organ.

Lead author Dr Daniel Amen, founder of Amen Clinics, which are throughout the US, said: ‘The cannabis abuse finding was especially important, as our culture is starting to see marijuana as an innocuous substance. This study should give us pause about it.’

Reduced brain blood flow has previously been linked to stroke and dementia.

Perhaps surprisingly, no link was found between depression and brain ageing. The researchers believe the mental-health condition may affect different parts of the brain to disorders such as ADHD and schizophrenia.