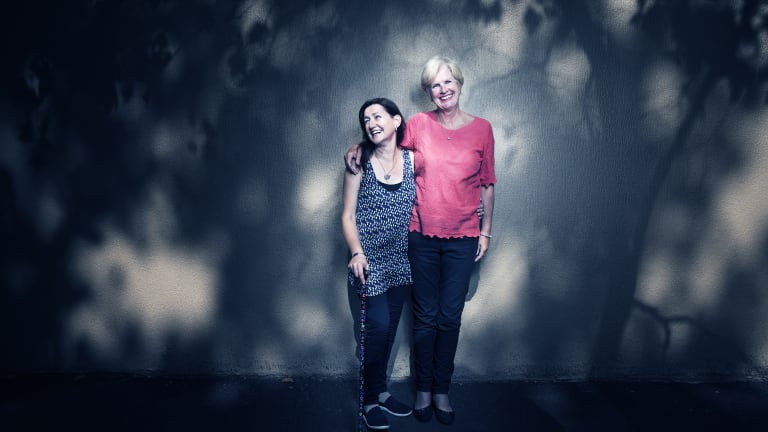 “Josette put her hand on my arm and said, ‘You can do this. You’ve beaten cancer, you’ll be fine,'” says Megan.

MEGAN: When I was six, I had an ache in my left knee that kept occurring. I was riding a scooter a lot and my folks thought it was growing pains, but one night I woke up in agony. Our GP X-rayed my knee and couldn't find anything, so he decided to X-ray my hips. They found a tumour the size of an orange.

I was admitted to hospital the next day. I remember that first night clearly. I was so scared. When my parents had to leave I watched them walk away; I don't think I'll ever forget that. When the lights went out, that's when I cried, silently so the nurse wouldn't come back.

I was supposed to have an amputation, but I was headstrong and said no. Instead they gave me radiation and chemo. It takes a special kind of person to work in paediatric oncology, and I wasn't always a good patient. I didn't remember Josette, but Mum does: she says she always treated me with kindness and respect.

The treatment took two years. The radiation left a fourth-degree burn and my hip bone has disintegrated, so I've had my other leg shortened three times to even me up. It has also affected an ovary and left me with a hormonal imbalance.

In my teenage years, I became addicted to alcohol. When I left home at 18, I was a party girl and discovered drugs. Alcohol works really well at pushing everything away and drugs work even better. I was difficult to be around but when I was drunk and on drugs, I felt people liked me more.

I stayed that way until I was in my late 20s, when a doctor established I was in menopause and had been for years. He put me on oestrogen and life improved dramatically for a while.

Then, in 2011, I had the year from hell. I'd moved from Sydney to Brisbane and my house flooded, my dog died, a breast lump was mismanaged, I lost my part-time job and my relationship broke down. I had a nervous breakdown. I then saw a psychologist and weaned myself off cannabis but I was still drinking every day. Later, I thought, "Okay, you've got a problem, do something about it!"

So I went to SMART Recovery [Self Management And Recovery Training, a not-for-profit organisation that helps people tackle addiction]. It took a couple of years but it changed my life, and I kept coming back long after changing my habits. Then one day I was asked if I'd consider training as a peer facilitator for SMART. I use a walking stick and on the first day of training, the teacher asked, "What's with the walking stick?" I told her I'd had cancer as a kid, and she asked if it was Ewing's.

I nearly fell over. Few people have ever heard of Ewing's sarcoma. Then she said, "I remember you!" My immediate reaction was to feel guilty, because I was a difficult patient. It was hard to process, how life had come full circle.

I was a bit intimidated by Josette. She's quite commanding and a driving force of SMART Recovery. But reconnecting was brilliant. Last year, I was asked to deliver my story to the board of directors. While waiting to give my speech, I was anxious. Sitting next to me, Josette put her hand on my arm and said, "You can do this. You've beaten cancer, you'll be fine." I thought, "She's right." It wasn't just the encouragement, it was the acceptance.

I feel honoured to have her friendship and support, and we laugh so much when we get together. I find it extraordinary that she's been involved in saving my life. Twice.

JOSETTE: Working in paediatric oncology was rewarding; you really got to know the kids and their families. The kids aren't just coming in to have their tonsils removed; most treatments were for two years-plus. I nursed hundreds, but I remember Megan because her Ewing's sarcoma was unusual.

The prognosis is not usually great, and it's tough treatment. Megan was quite feisty – if she didn't want to do something, she wouldn't. She stood out because most kids go along with what they're told, whereas Megan challenged what was going on. She refused to have the conventional treatment – surgery – and survived.

Many years later Alex Wodak, the then-director of the Drug and Alcohol Service at St Vincent's Hospital in Sydney, was looking for someone to co-ordinate SMART Recovery. We were piloting the program in NSW for 20 groups in the community and set up 40, so we knew the interest was there. In 2016, a facilitator in Brisbane had mentioned she had a really good participant who she thought would be a great employee.

I went up to Brisbane to train the facilitators, and in walked Megan. When I asked her if she'd had Ewing's, she just looked at me. Then I knew exactly who she was. We were both in shock.

It wouldn't have surprised me if she had relapsed and died, because that can happen. The consequences of her treatment means she has a lot to contend with. When kids survive cancer, they can end up with a lot of emotional issues, and the way people cope with their emotional issues is often through drugs and alcohol. It was great to see Megan again; I was excited she was doing something about her addiction and was doing well – is doing well – and putting that energy into becoming a facilitator.

Through adversity she's found her niche and she's good and passionate about what she does. A lot of people would be bitter, yet she's at a point where she's giving back. I admire her strength and ability to keep on keeping on.

Megan says I saved her life but I dispute that, because both times she did it herself.

To read more from Good Weekend magazine, visit our page at The Sydney Morning Herald or The Age.