Blogger, 27, whose ‘itchy skin’ turned out to be CANCER shares her top 10 tips on how patients can smile through gruelling chemotherapy (and they include turning up to hospital in fancy dress)

A blogger whose ‘itchy skin’ was actually cancer has shared her 10 top tips on how to smile through chemotherapy.

Georgie Swallow, 27, thought she was suffering from eczema for a year prior to her cancer diagnosis in September 2018.

Doctors eventually detected she had Hodgkin lymphoma when a plum-sized lump formed on the side of her neck – a symptom of the disease.

Miss Swallow needed six months of chemotherapy. But despite going into remission, the cancer returned in June this year.

She wants to spread her positive message to ‘see the funny side’ of hair loss, even comparing her head to objects like spoons and potatoes. 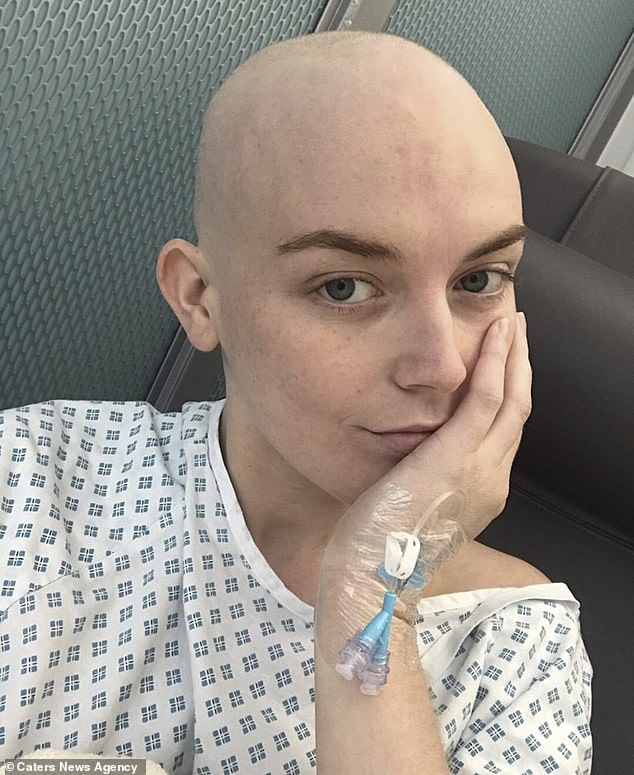 Georgie Swallow, whose ‘itchy skin’ was actually cancer has shared her 10 top tips on how to smile through chemotherapy (pictured, having treatment herself) 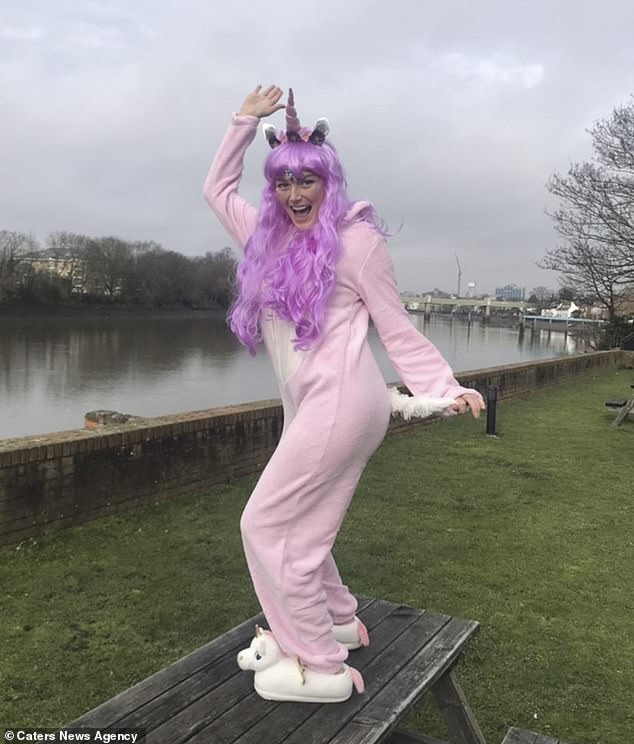 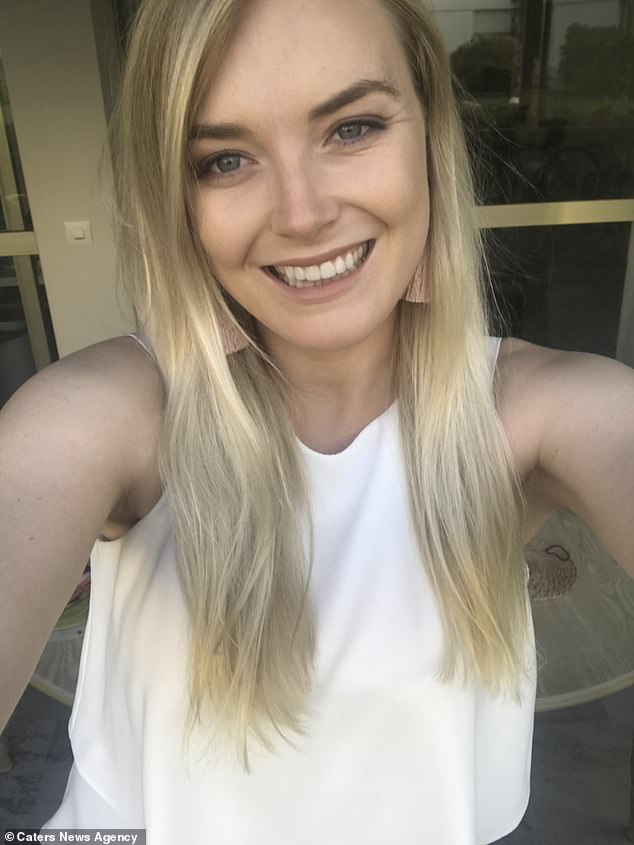 Before her shock diagnosis, Miss Swallow thought her itchy skin was eczema 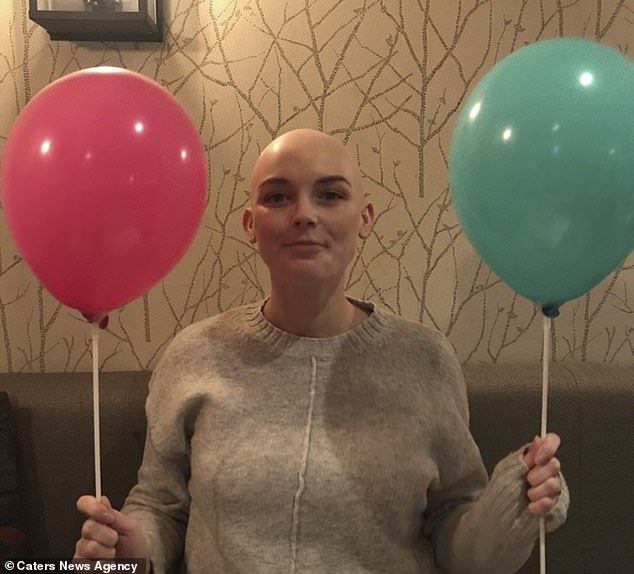 Miss Swallow wants to spread her positive message to ‘see the funny side’ of being bald, comparing her head to objects like spoons and balloons 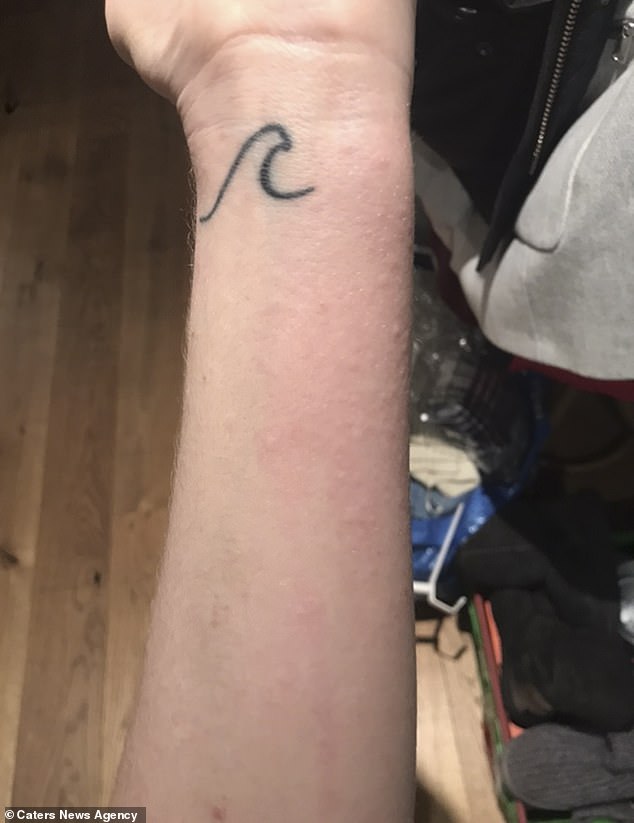 Miss Swallow cut certain foods from her diet thinking her itchy skin was triggered by an allergy. Pictured, the rash on her arm

Miss Swallow, formally an executive assistant at an interim management firm before her diagnosis, said: ‘My whole outlook on life has changed since being diagnosed with cancer and I refuse to be sad.

‘The day I was told I got my hair chopped off and I brought loads of comfy clothes.

‘I just thought of fun ways to make sure cancer doesn’t bring me down, such as bringing a picnic to chemo.

Georgie Swallow has shared her top tips on how to smile through chemotherapy:

1. It’s important to be able to see the funny side of things for example, compare your head to object e.g. a spoon

2. Buy a dog – mine have helped me so much by giving me snuggles or helping me clear my head with a walk.

5. Turn up to chemotherapy in fancy dress

6. Bring cakes and biscuits to chemo and offer them around – a great way to make chemo friends!

7. Connect with people who are in the same situation

9. Have fun with wigs and wear crazy colours

10. Always play the cancer card – it is your ultimate get out of jail free card

‘My looks changing really did affect me, so even though I was down about how I couldn’t recognise myself, I picked myself up by finding the fun and comparing my noggin to different objects and wearing crazy coloured wigs.’

She said: ‘I had been to the doctors three or four times before in the year as I had the most unscratchable itch.

‘I cut certain foods as I thought it might have been an allergy and I was told it was eczema by doctors.

‘I lost two stone in four weeks but at the time I was drinking meal replacement shakes so I thought they were amazing. I recommended it to all of my friends.

‘Unbeknownst to me, it was another symptom of Hodgkin lymphoma.’

Symptoms of Hodgkin lymphoma, a rare cancer of the lymphatic system, include weight loss, a fever, persistent cough and itchy skin.

The most common sign is a swelling in the neck, armpit or groin, which Miss Swallow soon began to experience.

She said: ‘I only started to worry and research my symptoms when I suffered a month long bout of flu and woke up with a huge plum-sized lump in my throat. 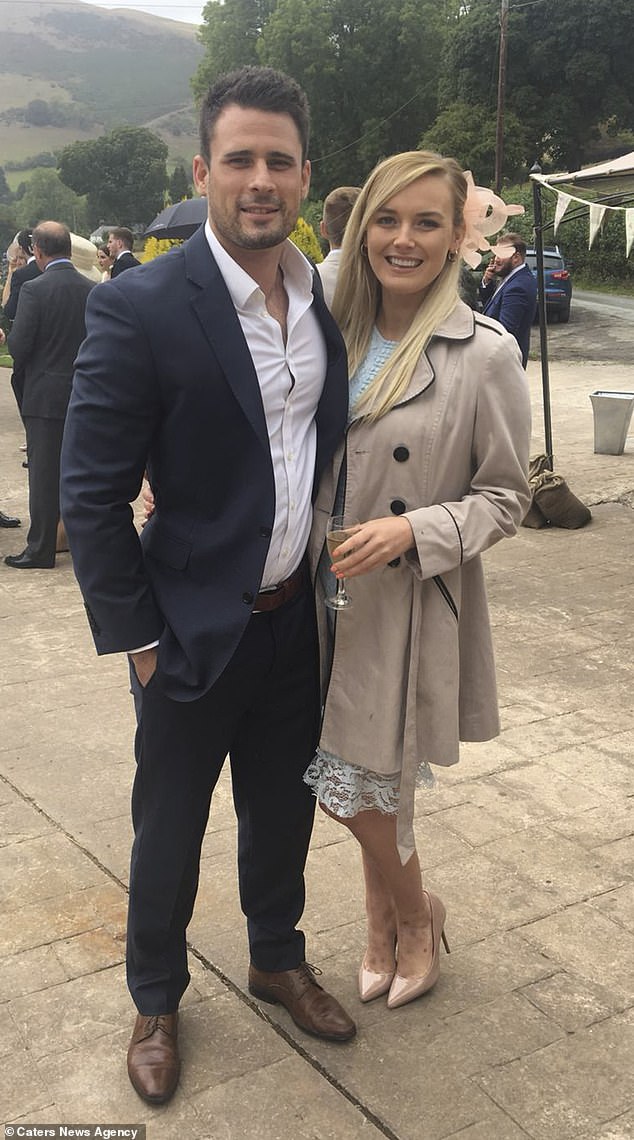 Miss Swallow lost two stone before her cancer diagnosis but thought it was the meal replacement shakes she was using. Pictured with her boyfriend Kyle McLaren-Kennedy 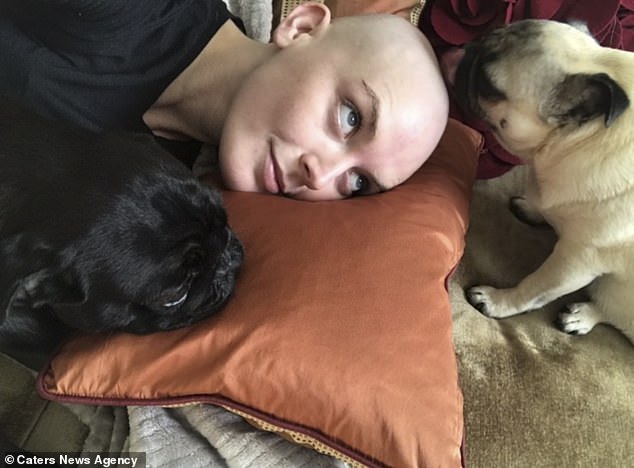 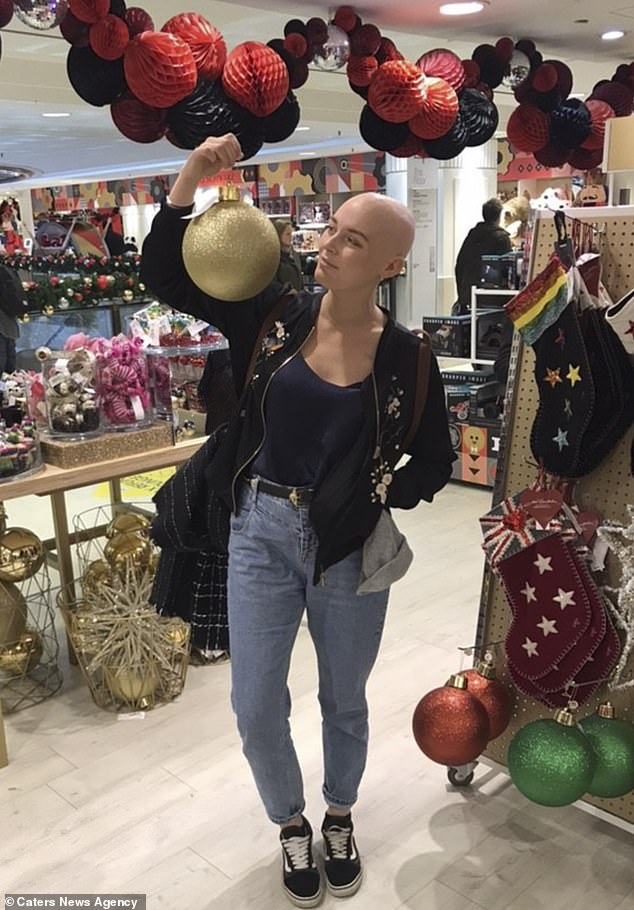 ‘I self-diagnosed myself with cancer but talked myself out of it as there’s the joke of “don’t Google your symptoms as it will say you have cancer,” but this time I actually did.

‘It all happened so fast, I had a CT scan, biopsy and more tests then the following day I started chemotherapy in September 2018.

‘The speed was a blessing, I didn’t have time to think.

‘There was a period when my mental health took a dip as I didn’t recognise myself anymore, but I needed to feel bad to feel good.’

Hodgkin lymphoma can develop at any age, but it mostly affects young adults in their early 20s and older adults over the age of 70.

Around 2,100 people are diagnosed with Hodgkin lymphoma in the UK each year.

It’s estimated by The American Cancer Society that 8,110 people in the US will be diagnosed with Hodgkin lymphoma this year, and 1,000 people will die of the disease.

In February 2019, Miss Swallow was in remission. But three months later her cancer had returned. 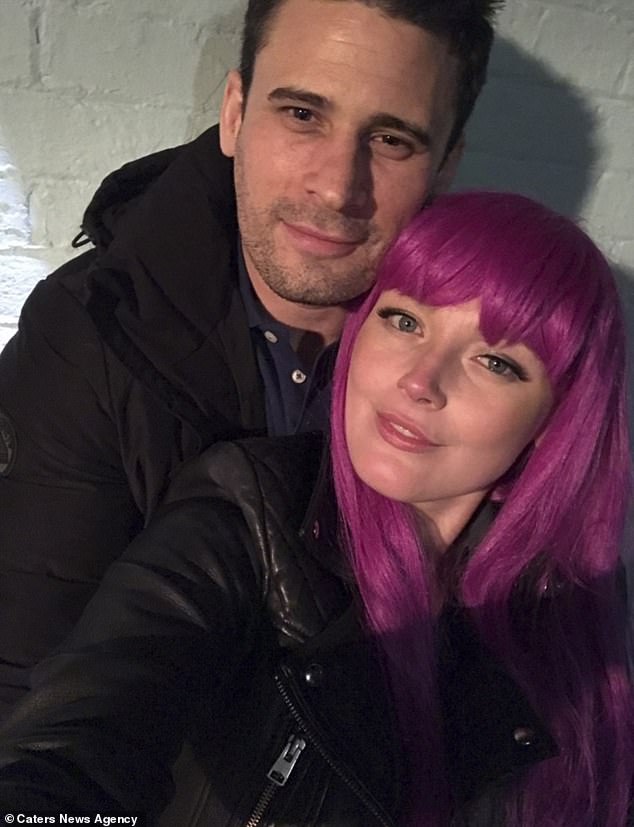 Miss Swallow, pictured with her boyfriend Kyle McLaren-Kennedy, wears brightly coloured wigs. She said: ‘My looks changing really did affect me, so even though I was down about how I couldn’t recognise myself, I picked myself up’ 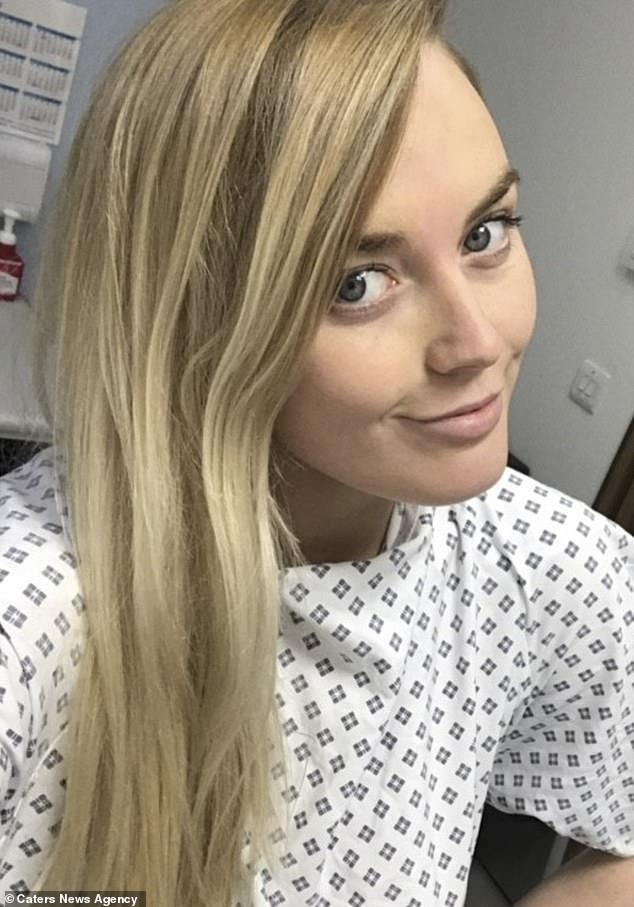 Miss Swallow said her diagnosis came very fast. After finding a lump in her neck, she had a CT scan, biopsy and more tests, then the following day started chemotherapy 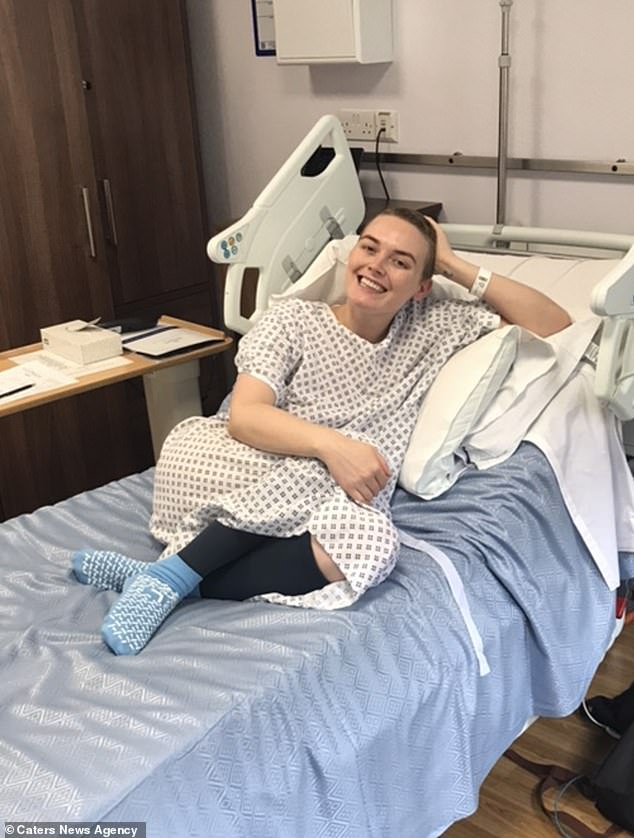 WHAT IS HODGKIN’S LYMPHOMA?

Hodgkin’s lymphoma is a type of cancer that starts in the white blood cells.

It affects around 1,950 people each year in the UK.

A common early symptom is having a painless swelling in the armpits, neck and groin.

It has been linked to people with lowered immunity, a family history of the condition, smokers and those who are overweight.

Treatment may include chemotherapy, radiotherapy, steroids and stem cell or bone marrow transplants.

She is currently going through chemotherapy and awaiting a stem cell transplant, which would allow her to receive stronger doses of drugs.

Her spirits remain high after meeting other women through style nights that are organised by support group Cancer Chicks.

The group supports people in their 20s and 30s going through cancer, and is run by the charity Trekstock, for which Miss Swallow recently became a young ambassador for.

Miss Swallow said: ‘I felt better knowing there’s other girls who are going through the same as me, it is easier to talk to them about what I am going through as they are in the same boat.

‘We have a laugh and a joke about our bald heads that resemble a potato and it is totally fine, it has helped me a lot.

‘I might have cancer, but I am not going to stop living and I urge other girls to do the same.’

Tags:10, chemotherapy, Has, Her, How, On, Shared, smile, through, tips, to, top, Woman
Related Posts
Diet & Food News