"The most unprotected person in America is the Black woman." Those words from Malcolm X in 1962 are no less relevant today. Like a kind of natural armor, protective styles can guard the hair — and the mind — against threats both physical and existential. In our December/January issue, writer and style expert Michaela Angela Davis reflects on the term "protective styles" and the deeper meaning it holds for Black women and girls. Then, Del Sandeen breaks down the most common protective styles, their origin, and their evolution.

At the time of this writing, no one has been charged or arrested for the killing of Breonna Taylor. One of the most widely-seen photos of her is at her EMT training graduation ceremony. The "B. Taylor" patch sits proudly above the chest pocket of her straight-out-of-the-box blue uniform shirt.

She's cradling a dozen signature roses in the crook of her elbow, certificate in hand, fingernails subtly did. A broad smile animates her fresh face, pushing her plump, luminous cheeks right up to her sparkling, squinting, age 20-something eyes. Set back, away from her flawless forehead, long black and burgundy Marley twists are carefully woven and wrapped around her head like a turban made of yarn. She's serving warrior Queen Amina of Zaria vibes. On this most joyous and distinguished day, Taylor chose to wear her hair in a protective style. 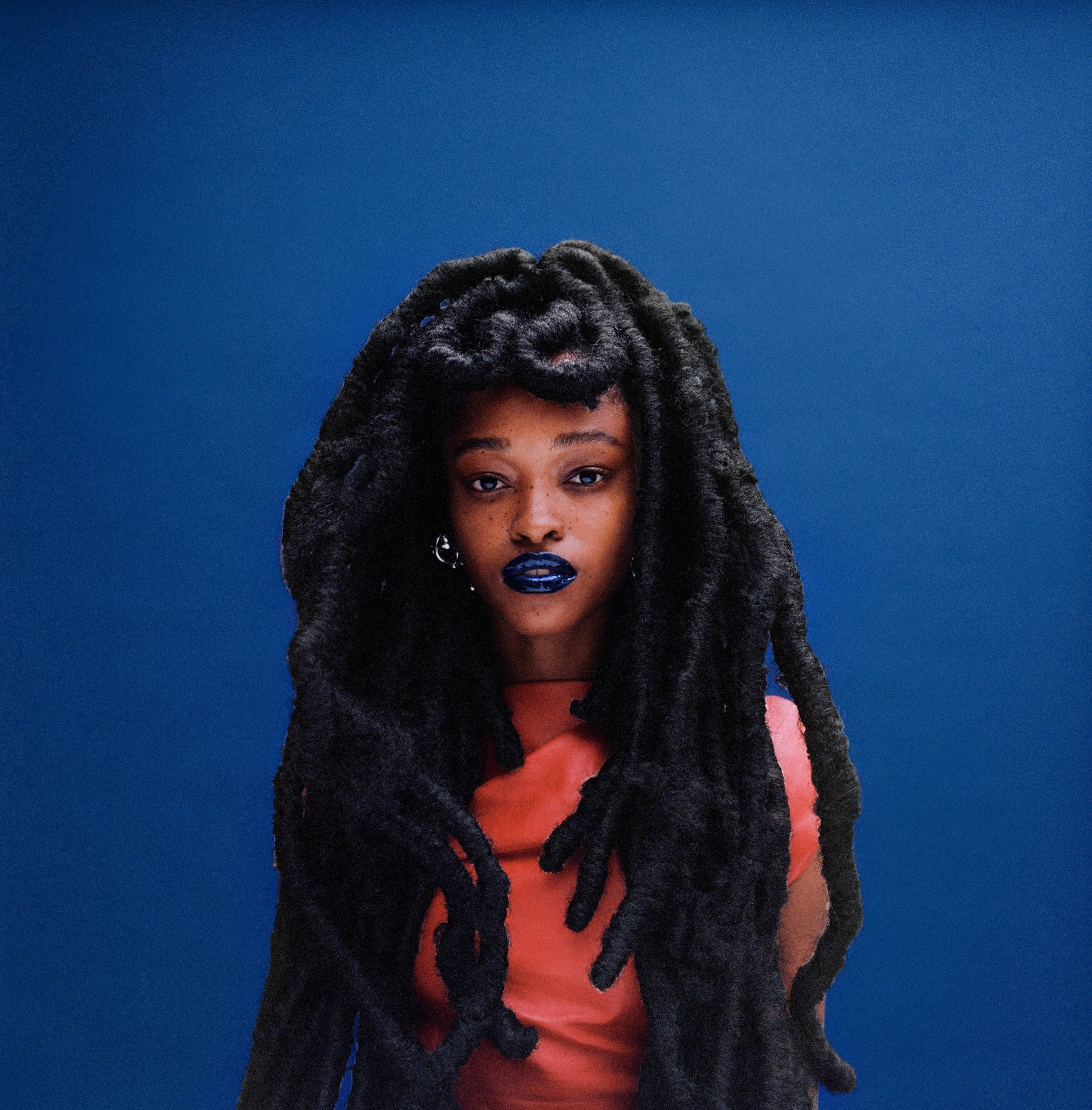 Black women have prepared our hair in protective styles — braids and twists and knots — for centuries. Depictions of women in cornrows have been found in Stone Age paintings in Northern Africa dating back to 3000 B.C. Many women of African descent have thick, tightly-coiled hair, divinely designed to shield our brains from the heat of the sun. That hair is strong and resilient, but at the same time, it can be quite fine and fragile, especially vulnerable at the curve of the curl and at the ends, which are susceptible to tangles, knots, snags, and breakage. So Black women routinely gather our strands together and gently tuck in those delicate ends to shield hair from damage and loss.

"The hair of Black women can be viewed as a metaphor for our identity and position in society. Our hair is complex, dynamic, historically mistreated, woefully under-represented, and misunderstood."

True to our ancestry and culture, Black women have conjured up endless creative and efficient methods to serve high style while protecting what grows out of our very own heads. No other group of people finds it necessary to use the term "protective styles."

The hair of Black women can be viewed as a metaphor for our identity and position in society. Our hair is complex, dynamic, historically mistreated, woefully underrepresented, and misunderstood. It has often had to code-switch and shape-shift to survive, be accepted, trusted, or adored. It is also the site of ingenious artistry, inspiration, and innovations of almost mythical proportions. It is in the hair where much of the "Black girl magic" you hear about is stored. 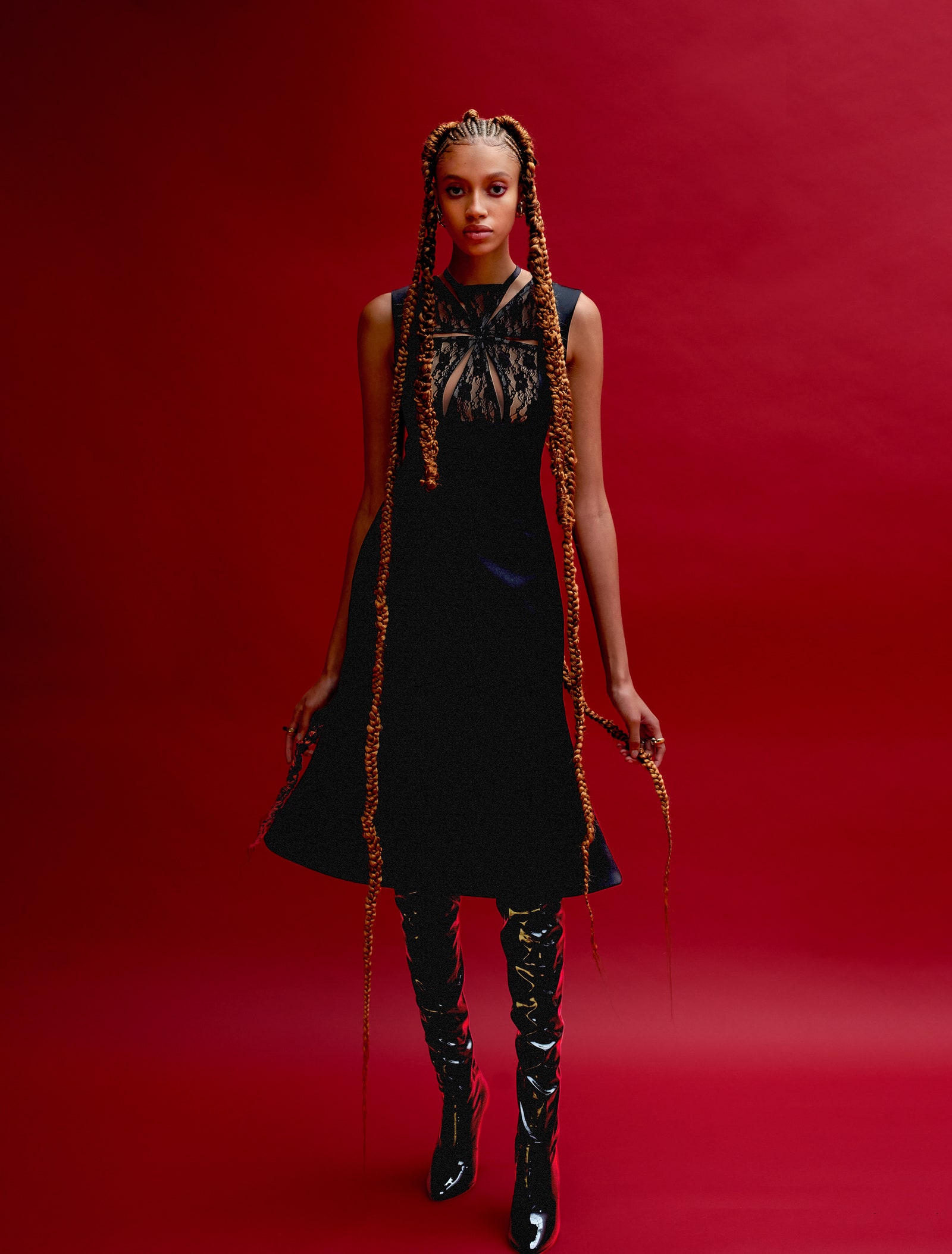 Perhaps that's why it particularly stings when these protective styles are worn by others like an ill-fitting skin. These styles link Black girls and women to the matriarchs of the past — the ancestors who taught these cosmetic defense mechanisms and mystical art forms as an inheritance to secure the safety and glory of our crowns. — Michaela Angela Davis

Protective styles are often seen through the lens of cultural appropriation, but celebrating their rich history is key to cultural appreciation. — Del Sandeen

Having your hair braided or cornrowed is a tradition that transcends socioeconomic status and brings many Black women together. Such an intimate ritual is also a social experience, often full of talk, laughter, and, sometimes, secrets. "Cornrows came to the Americas from Africa — and the name came from people who worked Southern plantations, named because the style looked like rows of corn," explains Ayana D. Byrd, co-author of Hair Story: Untangling the Roots of Black Hair in America.

But cornrows, like all Black styles, predated slavery. According to Twisted: The Tangled History of Black Hair Culture, by Emma Dabiri, they are known as "irun didi" among the Yoruba people of Western Africa. Cornrows can be basic enough to slip a wig over, they can incorporate geometric and mazelike patterns, or they can be the foundation for more braids. Being so easy to care for, they're often looked at as the most low-maintenance of protective styles.

Like many Black hairstyling traditions, Fulani braids have roots in Africa. They are distinguished by details like a single cornrow down the center of the scalp, or cornrows on the sides of the head directed toward the face.

Named for the Fulani people of West Africa, the braids can symbolize many things — marital status, occupation, or even class. For example, young teenage girls may wear symmetrical braids with a coiled tuft on either side of the head. "Hair in pre-slave trade West Africa acted almost like a social security number," says Byrd. "Fulani braids, while beautiful, also conveyed markers of someone’s identity."

When Rihanna showed up at an awards show in 2014 wearing a headful of Bantu knots, a lot of Black women simply nodded as many in mainstream culture first recognized the beauty of this style. Black women had been using Bantu knots as a protective style and heatless curling method for many, many years.

"Bantu knots have been worn for centuries, dating back to before the slave trade," says Byrd. They're named for the Bantu ethnic group of Zulu people and are also known as Zulu knots. Wound tightly, Bantu knots can project an air of steely strength. After they're unraveled, coily hair is transformed into stretched curls, showcasing just a hint of the versatility of Black hair.

As told in Hair Story, the term "dreadlocks" came from white people calling the "matted hair that had grown out of [enslaved people's] kinky unattended locks…dreadful." In recent decades, there's been a shift away from the word and its negative connotations.

Today, "locs" is widely used to describe the tightly-knit style created when natural hair is left unbothered and individual strands are allowed to mesh together. Depending on the size and symmetry of parted sections when starting locs, they can be uniform and pencil-thin (referred to as "sisterlocks") or free-form. 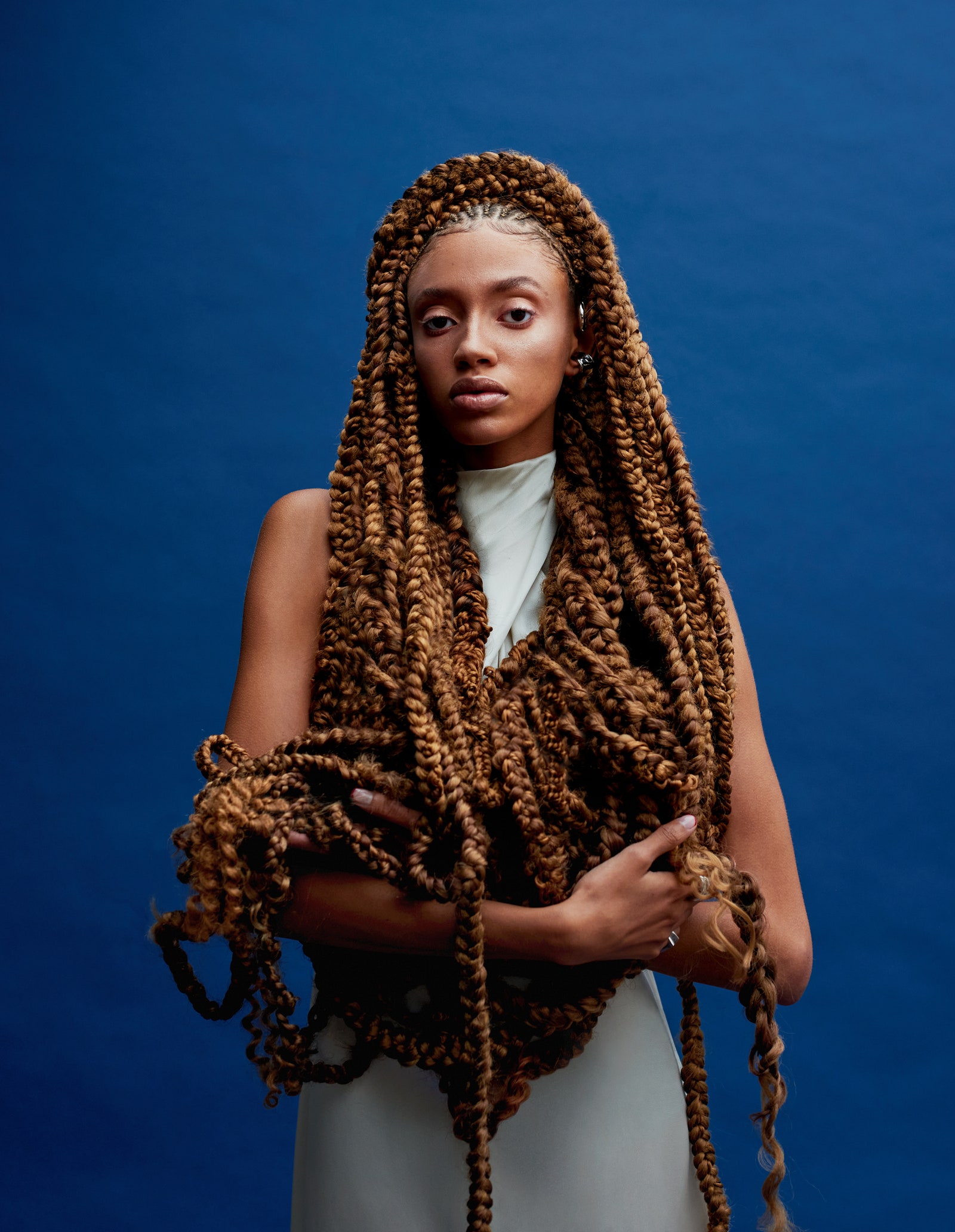 As the hair grows, techniques such as palm-rolling maintain sleek roots, but some wearers prefer an organic approach, letting their hair lead the way. All locs take time to grow, but the end result of all that patience can vary widely, from a Bob Marley free-form style to the sculpted twists and updos that Chloe and Halle Bailey create with their malleable locs.

The tighter your curl pattern, the easier it is to cultivate locs. Yet even with this Afro-texture-friendly style, there's still controversy surrounding who can wear the look, with some non-Black people claiming that anyone should be able to wear locs without being called a "culture vulture." But locs, like other natural styles, often "have various spiritual and cultural meanings, depending on the society," Byrd says.

Rastafarians base their commitment to the style on biblical scriptures. They explain that locs are only for Black people because the texture of their hair can cultivate them unaided, without the addition of heavy products like beeswax. (In the Rasta faith community, they also maintain all-natural diets and try to keep everything that is applied to the body as close to nature as possible.)

Baby hairs aren’t technically a protective style, but they are a common accouterment to braids, locs, and knots. Before there was FKA Twigs and her elaborate take on baby hairs, there was Chilli from the girl group TLC. Before Chilli, there was LaToya Jackson. And before all of them, there was American-born Josephine Baker, who shimmied her way to fame on European stages in the 1920s wearing her signature curled sideburns and a single curlicue in the center of her forehead. 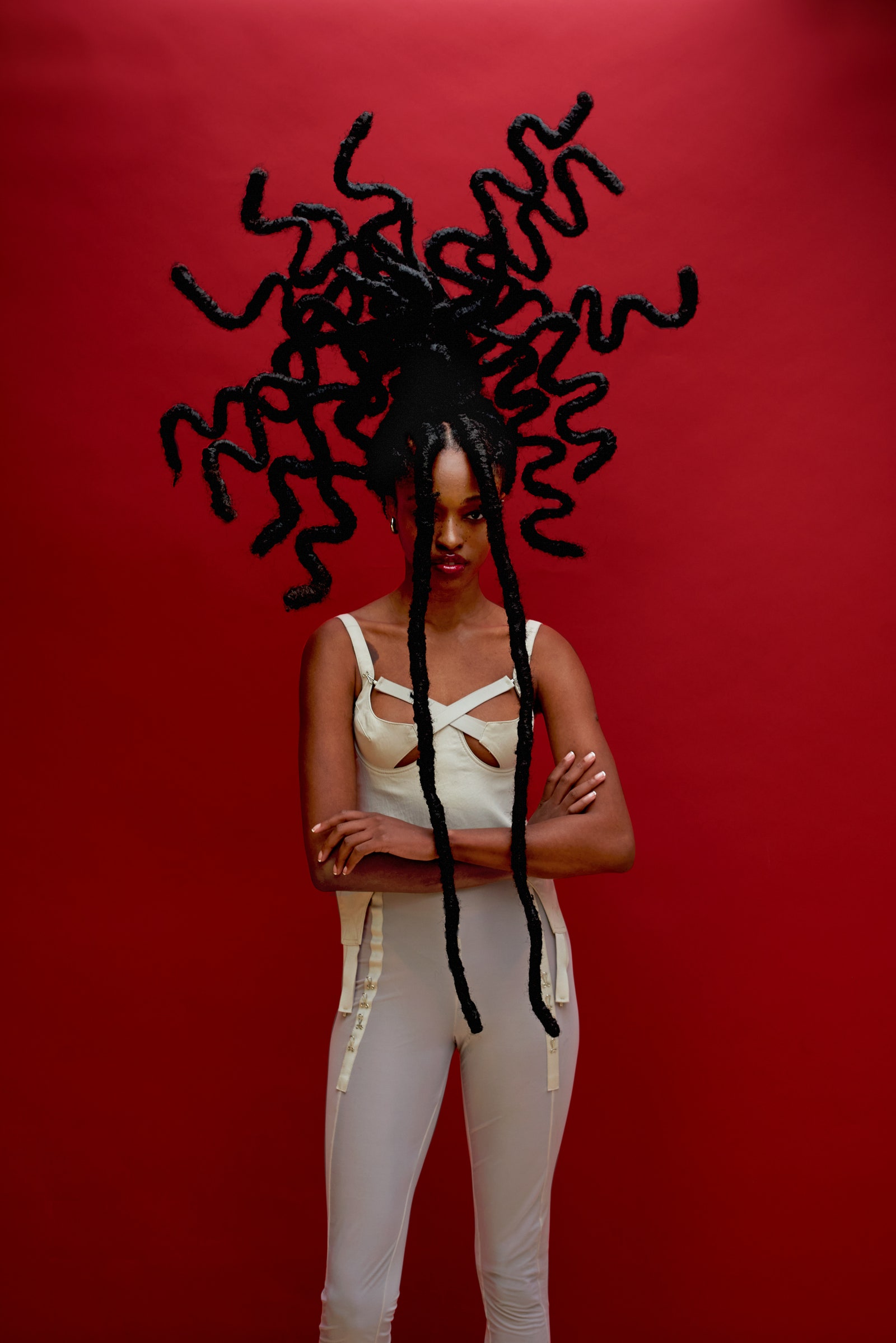 Black girls and women have long used a combination of brown gel and an old toothbrush to make waves where previously there had only been fine hairs. Along with their Latina and Afro-Latina sisters, they have truly made an art form out of styling baby hair. Whether they frame ponytails or updos, braids or Afro puffs, laid baby hairs are a finishing flourish for any protective style, or they can make a statement all on their own. Remember when FKA Twigs's spelled "love"? — Del Sandeen