A bad breakup forced Robert Sean Grady Jr. to reflect on himself, and realize that if he was going to find happiness in love, he needed some important self-improvement. The 28 year-old medical record software specialist from Wilkes Barre-Scranton, Pennsylvania, had put a lot into the relationship, but when it soured he decided to work on himself. He also wanted to improve his hockey stamina.

Grady remembers always being the chubby kid, thanks in part to poor diet. Through high school he was overweight, the target of teasing from other students. After graduating, he dropped 30 pounds, bringing him down to 240. He got a girlfriend, but feeling miserable in the relationship, he turned to food as an escape from his unhappiness. “My early and mid-20’s weren’t my best times, unfortunately,” he says, and by 24 he weighed 340 pounds.

“I don’t think I really understood just how big I was,” he says. He was still playing hockey and golfing with friends, not fully acknowledging his size. “I knew I was overweight, but I didn’t take it seriously.

Then came the Christmas breakup. Grady had already stopped drinking soda. “Why drink your calories when you can eat something delicious?” he says. He was about 290 pounds and ready to slim down. He downloaded MyFitnessPal to calculate his daily calorie intake (about 1900, but he’d hit 200-300 less), aiming to lose 2 pounds a week. He tossed out all the sweets and junk food in his house—literally throwing it away.

Revamping his diet was the biggest focus. He drinks mostly coffee and water now. His breakfast might be a Clif bar and coffee, or a ham, egg, and Swiss sandwich on wheat toast. Lunch is a turkey or ham sandwich with a cup of berries. His dinners vary; he tries to leave room for extra calories, and quesadillas have become his go-to meal. He developed a taste for spinach and mushrooms, both filling and high in fiber. He also praises slow-cooking, including health chili recipes, for helping him meal plan. 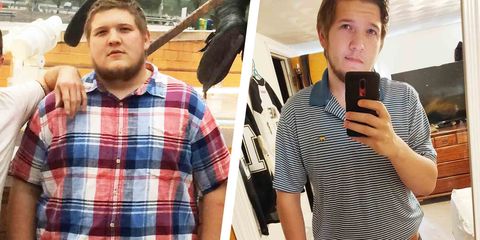 Simply cutting calories had him dropping weight quickly. He went from 290 down to 230 in about ten months. (Earlier, over the course of three years, he’d cut from 340 to 290, for a total of 110 pounds lost over four years.) There were some ups and downs, but you can’t argue with the results.

“And to be honest,” he says, “I still haven’t taken a step in a gym.” He plays hockey two or three times a week, takes half-hour walks on his lunch break, and walks trails near his house after work. Most of his progress, though, he owes to a revamped diet.

He’s still getting used to his new size. “I still feel inside like the fat guy I always was,” he says. It helps to realize he can fit into 36-inch waist jeans, down from 44 at his largest. “I feel incredible physically,” he says. “It’s just the mental and emotional part that people don’t take into account, and I’m trying to give myself more credit than I have.”

With his newfound confidence he’s met a great new partner, Barbara, who he credits as making his whole transformation worth it. He’s still aiming to get under 200 pounds, where he hasn’t been since early high school, and start using weights to tighten up his body. “Self improvement,” he says, “is never finished.”