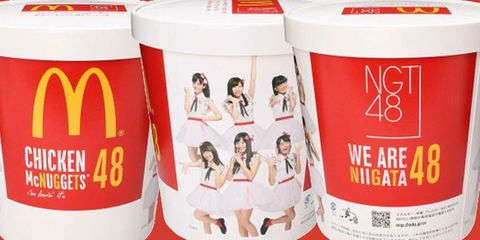 McDonald’s Japan has teamed up with the girl group in the past, and served the buckets in 2015, as well. Foodbeast reports that neither McDonald’s Japan nor NGT48 have publicly promoted the nugget buckets yet, but apparently they will debut December 1.

People tweeted their responses to news of the chicken-filled buckets, expressing envy of those in Japan.

Further proof Japan is the best country on the planet.

When can we expect this in the states?

I read that @McDonalds was coming out with buckets of nuggets, I hope that’s true because my life is now made.. ??

While you’re impatiently waiting for the McNugget buckets to hit the states (because it’s only a matter of time, right!?), you can head to Chicago to check out a super modern McDonald’s, complete with charging pads and a floating garden. Swaaaanky.

Also, this is all bringing me back to a time early in high school when my best friends and I split a 50-piece McNugget from McDonald’s. I will not be divulging how many 15-year-old girls ate that many nuggets, but I will say that we we’d definitely be able to polish off a McNugget bucket. Japan, we’ll raise our lowly 20-piece nugget cartons to you!