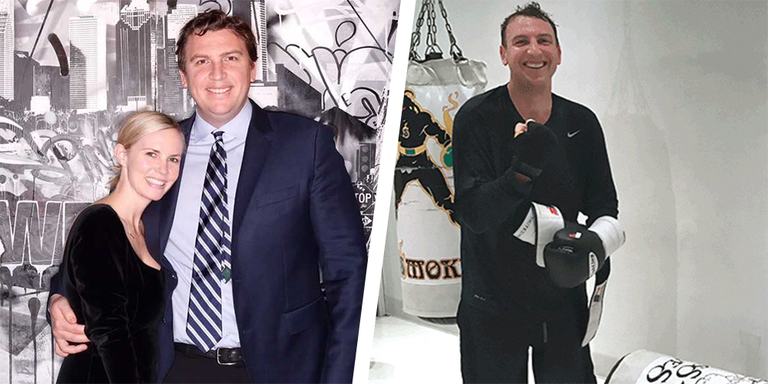 Fritz Lanman didn’t notice the weight — until he did.

Growing up as a multi-sport athlete, he could always stay in shape without thinking too much about it. But things changed in his 30s. His metabolism slowed down. He started traveling a lot for work. And a knee injury sidelined his CrossFit pursuits.

The combined result was that he kept adding pounds to his 6’5″ frame. But it was all so gradual, he didn’t realize it was happening.

Then he saw the photo from his 2016 company holiday party.

A subsequent check-up delivered another punch to the gut. In college, he’d weighed around 210 pounds; now he weighed around 280, his cholesterol was dangerously high, and his doctor suggested he go on medication to help lower it. Lanman thought differently: “Rather than just medicate my way out of it, I said I’d like to try and fix it with lifestyle, nutrition, and exercise. He said, ‘Okay, try that, but it never works. I rarely see customers who are able to do it.'”

But Lanman had an advantage: He was and is the CEO of ClassPass, the popular fitness app that lets users take classes at a network of 9,000 fitness studios (not to mention sweat their asses off with live, at-home HIIT workouts).

“I run a company whose entire mission is dedicated to getting people to become the best version of themselves,” he said. “So I thought to myself: ‘Let’s see if it works on me.'”

Spoiler alert: It did. By diving headfirst into studio fitness and switching up his diet, Lanman has lost around 70 pounds and counting.

“I didn’t know I had that much weight to lose,” he said. “It wasn’t until looking back later that I was like, ‘Holy crap. I was in bad shape.'”

Lanman before his weight loss
Courtesy of Fritz Lanman

“It’s super intimidating, even if you’re someone who considers themselves athletic,” he admitted. “Showing up at a HIIT class, showing up at a boxing class — I didn’t know if we were going to punch humans or not.”

Nerves aside, it was a good plan: Research shows that exercising in a group setting can improve your mental and physical health. And Lanman learned he could scale down the tougher workouts, like Barry’s Bootcamp, to accommodate his needs.

From bootcamp to trampoline fitness and everything in between, Lanman started a two-a-day workout habit. (He also hired a personal trainer to help build some extra muscle.)

“Studio fitness kind of turned working out into a fun activity in its own right,” he said.

With the help of a nutritionist, Lanman adopted a meal plan that replaced his old carbohydrate-heavy diet with vegetables and lean protein.

Breakfast is full-fat Greek yogurt or eggs, with a little bit of fruit on the side; lunch is a homemade turkey burger or chicken breast that he meal-preps on Sunday; dinners are centered around a lean protein with vegetables on the side.

Between his fitness routine and his new diet, he was proving his doctor wrong: He was losing two to five pounds a week.

Lanman and his family
Courtesy of Fritz Lanman

Lanman was pleased with the way he looked in photos from the ClassPass holiday party a year later.

“It just looks like a different person,” he said.

Lanman has lost a total of 70 pounds, and he’s feeling better than ever. “Just purely from an agility standpoint, it’s like night and day,” he said. Not only is he able to lift heavier weight and get more out of his knees, but “I have the cholesterol reading of, like, a 17-year-old,” he said. He’s also noticed improvements in his sleep and concentration levels.

“I pick up two 35-pound dumbbells to do bicep curls, and I’m like, ‘Holy crap — that’s 70 pounds that I’m holding in my hands? That’s how much body fat was just sitting on this frame?” he said. “It’s two dumbbells worth of weight … just gone.”