Success of Pfizer’s and Moderna’s mRNA COVID-19 vaccines is ‘proof of concept’ the breakthrough technology could be programmed to fight cancer, heart disease and more, scientists say

The new technology behind Pfizer’s and Moderna’s coronavirus vaccines could be used to prevent everything from heart disease to cancer, experts say.

The breakthrough vaccine ‘platform’ they use transforms the body into a virus-zapping vaccine factory and could be retooled to run interference on other diseases and speed the development of shots to prevent future pandemics.

So-called messenger ribonucleic acid (mRNA) vaccines have now seen great success in late-stage trials by Moderna as well as Pfizer and its German partner BioNTech, and their efficacy for COVID-19 serve the first proof the concept works.

Both experimental vaccines had efficacy rates above 90 percent based on interim findings, which was far higher than expected and well above the 50 percent threshold U.S. regulators insist upon for vaccines.

Now scientists say the technology, a slow-motion revolution in the making since the discovery of mRNA nearly 60 years ago, could speed up the development of new vaccines.

Because they are based on a form of genetic material found in viruses as well as healthy or diseased human cells, mRNA vaccines can be programmed to target many potential causes of disease – at least in theory – and can be made more quickly and cheaply than other shots. 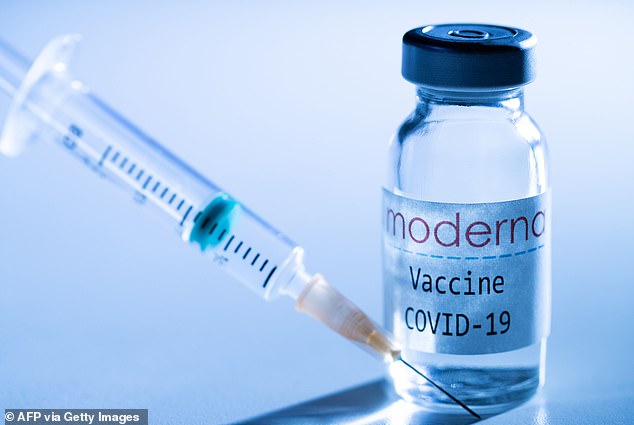 The vaccine ‘platform’ used by both Pfizer and Moderna to make their COVID-19 shots might be programmed to treat other diseases in the future, scientists say (file)

The traditional method of creating vaccines – introducing a weakened or dead virus, or a piece of one, to stimulate the body’s immune system – takes over a decade on average, according to a 2013 study. One pandemic flu vaccine took over eight years while a hepatitis B vaccine was nearly 18 years in the making.

Moderna’s vaccine went from gene sequencing to the first human injection in 63 days.

With BioNTech and Pfizer’s COVID-19 candidate on a similar trajectory, both could win regulatory approval this year, barely 12 months since the coronavirus first emerged.

Other companies are pursuing the technology such as Germany’s CureVac also has an mRNA vaccine candidate, though has yet to start a late-stage trial and is hoping it will get the green light after July 2021.

‘We’ll look back on the advances made in 2020 and say: ‘That was a moment when science really did make a leap forward’,’ said Jeremy Farrar, director of the Oxford University Clinical Research Unit, which is backed by the Wellcome Trust.

MRNA TECHNOLOGY EMERGES A GAME-CHANGER AFTER DECADES OF ROAD BLOCKS

Discovered in 1961, mRNA carries messages from the body’s DNA to its cells, telling them to make the proteins needed for critical functions, such as coordinating biological processes like digestion or fighting disease.

The experimental vaccines from Moderna as well as Pfizer and BioNTech use lab-made mRNA to instruct cells to make the coronavirus’s spike proteins, which spur the immune system into action without replicating like the actual virus.

Back in 1990, scientists managed to get mice to generate proteins by injecting mRNA, an early sign of the technology’s potential.

But early proponents such as Katalin Kariko, a Hungarian-born scientist and senior vice president at BioNTech, were hampered by obstacles such as mRNA’s instability in the body and its propensity to cause inflammatory responses.

A breakthrough came around 2005 when Kariko, along with colleagues at the University of Pennsylvania, figured out how to deliver mRNA without kicking the immune system into overdrive.

Still, it took another 15 years – and a pandemic that brought the world’s economy to its knees – to reach the cusp of success. Kariko said her years of dogged pursuit once made her the butt of jokes for some university colleagues.

‘The last time they laughed at me and ridiculed me was when they learned that I was going to join BioNTech seven years ago and they realized this company (didn’t) even have a website,’ she told Reuters. ‘But now, they learn of BioNTech and that we can do good things.’

Kariko said her life’s work could pay dividends, not just against COVID-19, but other diseases.

‘It could be easier sailing for the next anti-viral product, a vaccine for influenza and other infectious disease,’ said Kariko, whose daughter is a U.S. Olympic gold medalist rower.

Biontech is testing an anti-melanoma mRNA with Swiss pharmaceutical giant Roche in a Phase II trial. Among Moderna’s most advanced projects, besides its COVID-19 vaccine, are mRNA compounds to treat ovarian cancer or Myocardial ischemia, which are also in the second test phase.

None of the potential mRNA cancer therapies have reached the critical large-scale Phase III trials, however, and Kariko acknowledges that cancer presents a bigger challenge.

While a virus is a foreign intruder, cancer cells, however malignant, come from within the body, making them tougher to seek out and expose so they can be attacked.

‘Sometimes cancer is just caused by gene and chromosome duplication and then everything about it looks normal and the cell is just dividing more than it should,’ she said.

For vaccines against infectious diseases, the pharmaceutical industry’s traditional approach has been to whip them up in large bioreactors, a time-consuming, expensive process in facilities that can cost up to $700 million to build.

By contrast, Zoltan Kis, an Imperial College London researcher who models vaccine manufacturing, estimates that one five-litre bioreactor inside a $20 million facility could make a billion doses of some kinds of mRNA vaccines a year.

Drug manufacturer Lonza, enlisted to make ingredients for 400 million doses of Moderna’s vaccine annually at U.S. and Swiss sites, is due to start production this year with manufacturing lines costing $60 million to $70 million each.

‘We are producing mRNA at smaller scales and in smaller facilities when compared to traditional larger-scale equipment and facilities,’ Andre Goerke, Lonza’s global lead for the Moderna project, told Reuters.

‘The manufacturing ramp-up is quicker and more economical.’

Raymond Schiffelers, of University Medical Center Utrecht in the Netherlands, who heads a European Union programme for mRNA therapeutics, said the major advantage of the technology was that vaccine developers could mount an ‘ultra-fast response’.

‘Within weeks, testing can start, a major advantage over conventional vaccines,’ he said.

The moment a pathogen’s genomic sequence is known, synthetic mRNAs can be designed that encode key parts of the virus, such as the coronavirus’s potentially lethal spike protein.

Risks and challenges for mRNA remain.

Some candidates must be stored at extremely cold temperatures, making delivery potentially difficult in countries with limited infrastructure. They also may be fragile to transport, Schiffelers said.

BioNTech’s vaccine, for example, must be transported at minus 70 degrees Celsius, though Moderna said on Monday it can ship its candidate in normal refrigerators.

Francis Collins, director of the U.S. National Institutes of Health (NIH), which funded Moderna’s vaccine development, also said mRNA vaccines may not be a silver bullet for flu, since it mutates so swiftly that reaching 90 percent efficacy is unlikely.

But for COVID-19, Collins said mRNA is likely to be a revolution.